2 Art Exhibitions You Need To See

Two new museum shows trace the long careers of two artists that well into their eighties, yet still in their prime. 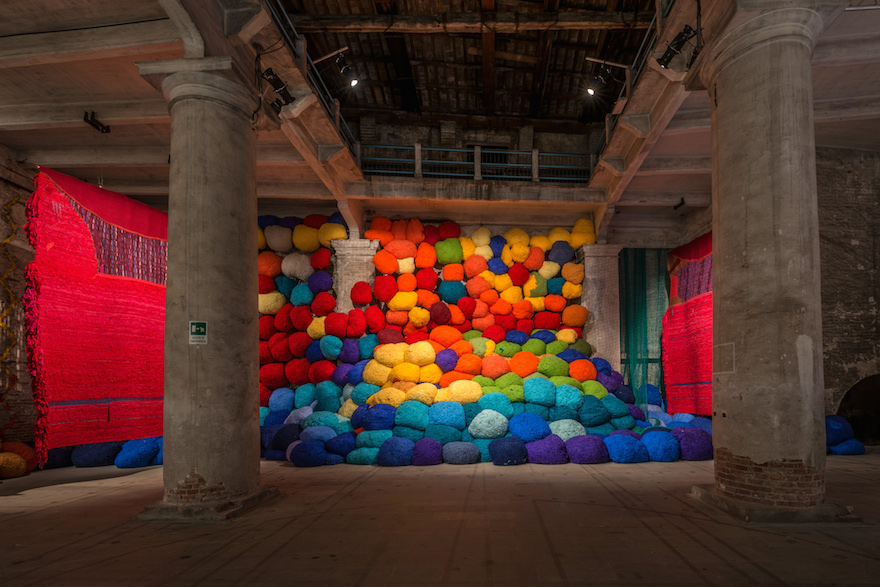 “Escalade Beyond Chromatic Lands” by Sheila Hicks, on view at The Bass

Youth may be a commodity in almost every way here in Miami, but it is just the opposite—a lifetime’s worth of dedicated artistic exploration—that anchors two new exhibitions this month. At PAMM, Beatriz González: A Retrospective is the first large-scale U.S. retrospective of the work of the 80-year-old Bogotá-based artist Beatriz González. Meanwhile, at The Bass, Sheila Hicks: Campo Abierto (Open Field) groups works from across the 84-year-old artist’s expansive career.

While the artists’ work is vastly different in style and medium—González is a painter and sculptor often associated with the Pop Art movement, while Hicks is known for her mastery of textile and sculptural installations—the two seem to share an opinion that it is not their own work that has necessarily evolved over the decades, rather it is the world around them that has shifted. “The critics have interpreted my art as a representation of Colombia’s recent history,” says González. “In that sense, some historical facts have been important for my production—the Palace of Justice siege [the 1985 attack on the Supreme Court of Colombia]; the narco-trafficking, and the migration of Venezuelans to Colombia.”

For her part, Hicks says, “I am not sure my work has evolved much from its original premises. Maybe it has expanded, deepened and become braver in a spirit of euphoria.”

The work of both artists features a bold use of color—González relied on her palette to document the political and social climate of her homeland, while Hicks studied with famed color theorist Josef Albers at Yale before living and working in Chile, Mexico and France where her focus was “material culture.” Her woven and textile works sing with vibrant shades that make her large-format pieces, like “Escalade Beyond Chromatic Lands,” produced for the Arsenale at the Venice Biennale in 2017, favorites among the world’s top curators. Those responsible for this show at The Bass—Silvia Karman Cubiñá, Leilani Lynch and consulting curator Frederic Bonnet—say that Hicks’ use of fibers echoes a rising interest in textiles within the past several years, especially from a younger generation of contemporary artists. “Her work and treatment of textiles offers a new perspective to the material, one that would have otherwise been considered feminine and perhaps less important years ago,” says Karman Cubiñá. “Wherever one goes, one is enveloped in cotton, linen, silk, wool, nylon, rayon, polyester, bamboo, cashmere...” says Hicks on her materials. “The stuff where art meets life.”

Arguably, audiences will find some of the pieces in the González retrospective to be more confrontational in their reflection of life. Works like “Los papagayos” and “Los Predicadores” are powerful and striking, conjuring sobering scenes from Colombia’s inescapably turbulent past. “This exhibition is different from other shows of Latin-American artists in the U.S.,” says González. “It is about another kind of Latin-American art classified as marginal; it doesn’t correspond to other trends.”

In Miami Beach, the Hicks show includes works that evoke landscape and nature—“alluding to the topography and lush flora/fauna of the Sub-tropical context,” says Lynch. “While Hicks’ works aren’t often explicitly about climate or nature, this exhibition provides that lens.” Hicks herself says that it’s “joy and enthusiasm” she hopes audiences of Campo Abierto will respond to the most. “Experienced in the paradise-like Florida geography and climate, my work will seem solidly playful with serious undertones,” she adds. “It stretches the imagination without disturbing it.” Sheila Hicks: April 13-Sept. 29, The Bass, 2100 Collins Ave., Miami Beach, 305.673.7530, thebass.org; Beatriz González: April 18-Sept. 1, PAMM, 1103 Biscayne Blvd., 305.375.3000