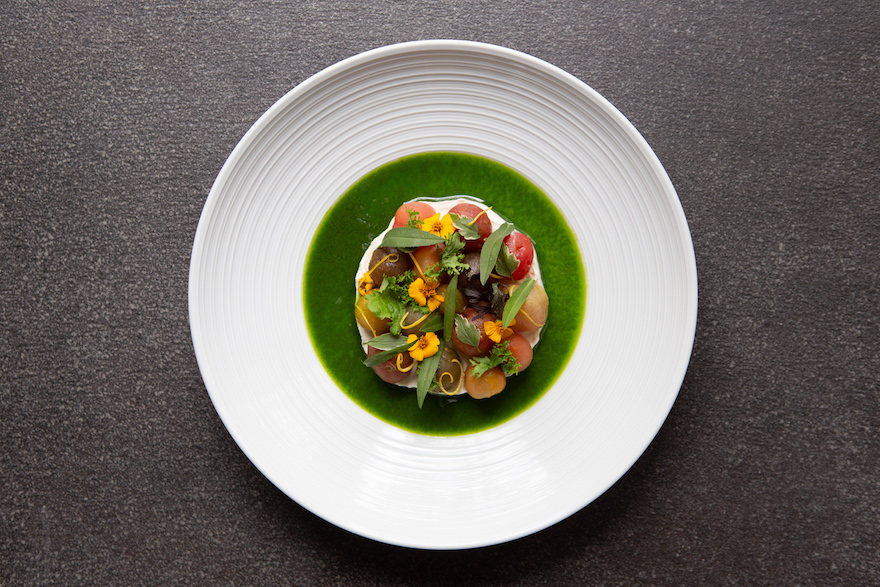 From the Heart
We love everything about Ad Lib, the new restaurant from Miami natives Jamie DeRosa and Hedy Goldsmith. The duo delivers the goods with a team that includes Sam Ross (of New York City’s Attaboy) as director of cocktail and spirits, Daniel Toral as sommelier and Cristiano Azevedo (of Indian Accent, also in New York City) as director of service. The “playful” menu (a nod to the eatery’s name) focuses on responsibly sourced meats, wild-caught shrimp and seafood, and local produce that is used in dishes such as Tina’s Pride tomato salad. 2415 Ponce de Leon Blvd., Coral Gables, 305.504.8895

Indian Interests
Anything from a chef referred to as the “Yo-Yo Ma of tandoor cooking” has our attention—especially in Miami, where Indian cuisine has been in short supply until recently. Hemant Mathur has the distinction of being the first Indian chef in the United States to be awarded a Michelin star. In fact, he won the honor twice: for Devi in Union Square in 2004 and then for Tulsi on Manhattan’s East Side in 2011. At Maska in Midtown, he’s ready to put that pedigree to the test with dishes such as Lucknowi Galouti kebab, lamb chops, rosemary paneer, mustard prawns and octopus masala. Spice of life is right. 3252 NE First Ave., Miami, 786.971.9100

It Takes Two
Jeff McInnis and Janine Booth have done it again. The couple welcomed 2019 by getting married, but not before they opened Root & Bone, a Miami location of their New York City favorite. The idea here is “honest Southern food,” and timeless recipes with dishes such as fried chicken, deviled eggs, grilled peaches, radish salad and those all-important biscuits. 5958 S. Dixie Highway, South Miami, 786.785.1001

Mexican Moxie
PEZ offers a type of Mexican cuisine Miami has not seen before. Chef Javier Plascencia is one of the founders of Baja-Med, a style of cooking born in Tijuana that focuses on seafood with Mediterranean flavors and cooking techniques. The 4,800-square-foot restaurant is deep in Miami’s Downtown area and features a menu marked by highlights such as open-faced tostadas topped with everything from corvina to yellow fin tuna and chicharron. Standout tacos include the Gobernador, stuffed with grilled shrimp, epazote and cilantro. Entrees don’t get better than the branzino cooked in a Vesuvio charcoal oven grill and seasoned with adobo. Desserts include the inventive elote dulce taco, which is served with charred corn ice cream, caramel popcorn, beer reduction and corn ash. 20 W. Flagler St., Miami, 305.570.3440

Dynamic Duo
Michael Mina continues his Aventura domination. The chef has joined forces with cookbook author Ayesha Curry to open International Smoke. Part of Aventura Mall’s new outdoor area, the barbecue-focused eatery (which began as a pop-up in San Francisco) is the third outpost of its kind in the U.S. Smoked and grilled specialties are the name of the game here, and nothing gets that point across better than the St. Louis-style pork ribs, a rack that’s rubbed with artisanal spices and then smoked for four hours. Progressive cocktails, many made with fresh fruit, include the Gina Jamaica, which is infused with pisco. 19501 Biscayne Blvd., Aventura