As Basel unleashes its artistic cachet on Miami this month, meet the individuals who keep Miami’s arts scene ticking all year long. 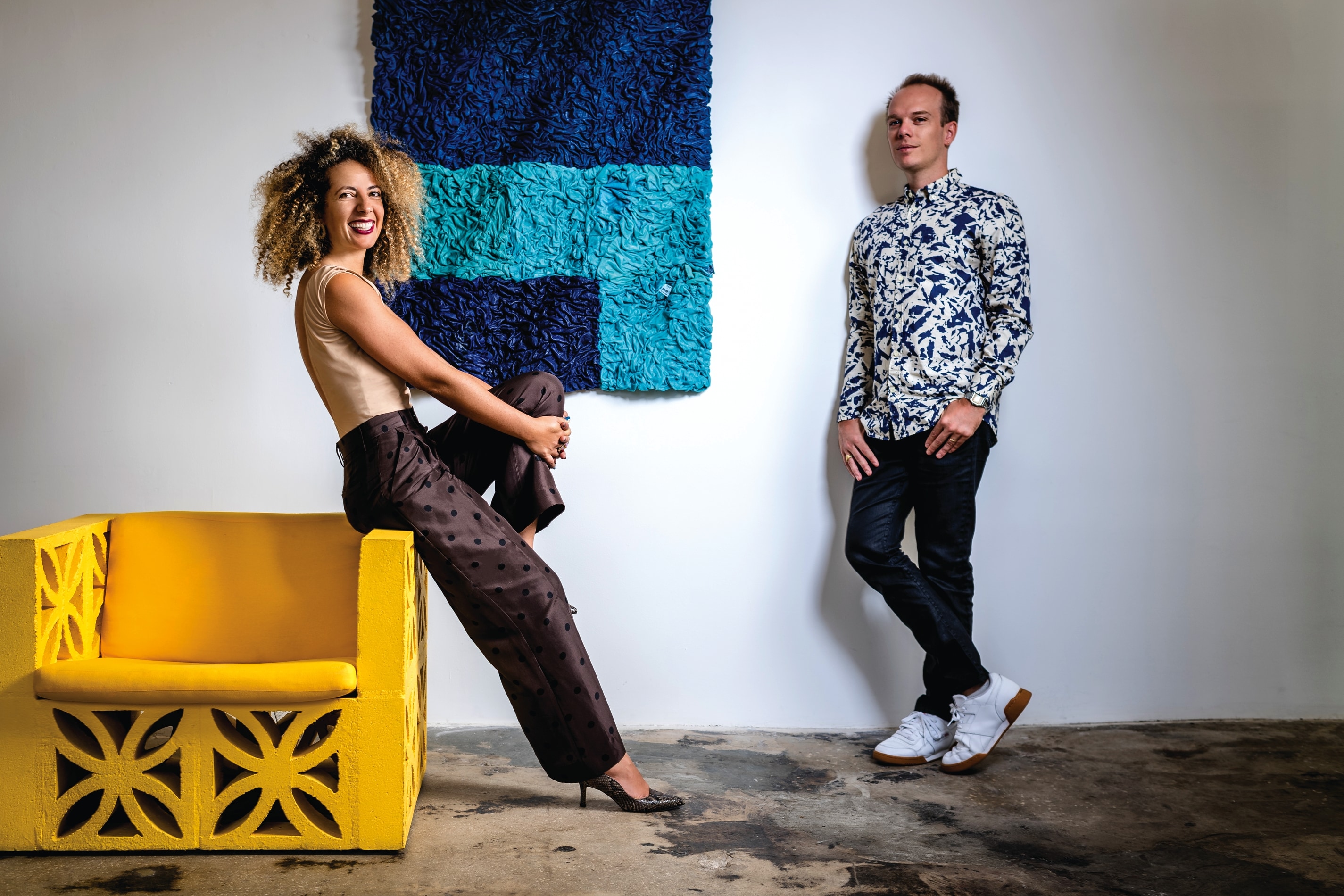 Nina Johnson-Milewski and Emmett Moore have various individual projects during Art Week, but their annual artists dinner is one coveted invite.

Come Art Week, Nina Johnson-Milewski will be exhibiting works from L.A.-based painter Eamon Ore-Giron (Dec. 2-Jan. 4), drawings by Southwestern artist and musician Terry Allen (Dec. 2-Feb. 8) and new sculptures by Nevine Mahmoud (through Jan. 4) at her eponymous gallery, while local artist/designer/sculptor Emmett Moore will have his latest creation on display at Design Miami/ (Dec. 3-8), as part of Mexico City’s Ago Projects. But on Thursday night, Dec. 5, they will team up to present something truly noteworthy, as they have done for the past four years. “When Emmett first started showing with the gallery I found out he was hosting some fellow RISD graduates during the art fairs for a casual dinner,” Johnson-Milewski recalls. “I loved the idea of fostering the relationship these artists shared, and being able to see them interact at the gallery was a total joy, so I asked Emmett if I could co-host. It was a natural fit.” Typically a catered meal is served around Johnson’s gallery space to guests including Katie Stout, Adam Charlap Hyman, Andre Herrero, Patrick Parrish, Alexandra Cunningham Cameron, Mark McDonald and Dwayne Resnick, but this year’s gathering will take place at the site of Moore’s future two-story home/studio in Spring Garden. Moore says someday it will be a concrete-and-glass nest filled with furniture he has designed, but these days, “it looks like a pavilion. It’s a shelter, but open.” Hard hats might be par for the course, but Johnson-Milewski says none of that matters: “It’s really just about spending time with people we love, who inspire us and who we know inspire each other.” Nina Johnson, 6315 NW Second Ave., Miami, 305.571.2288 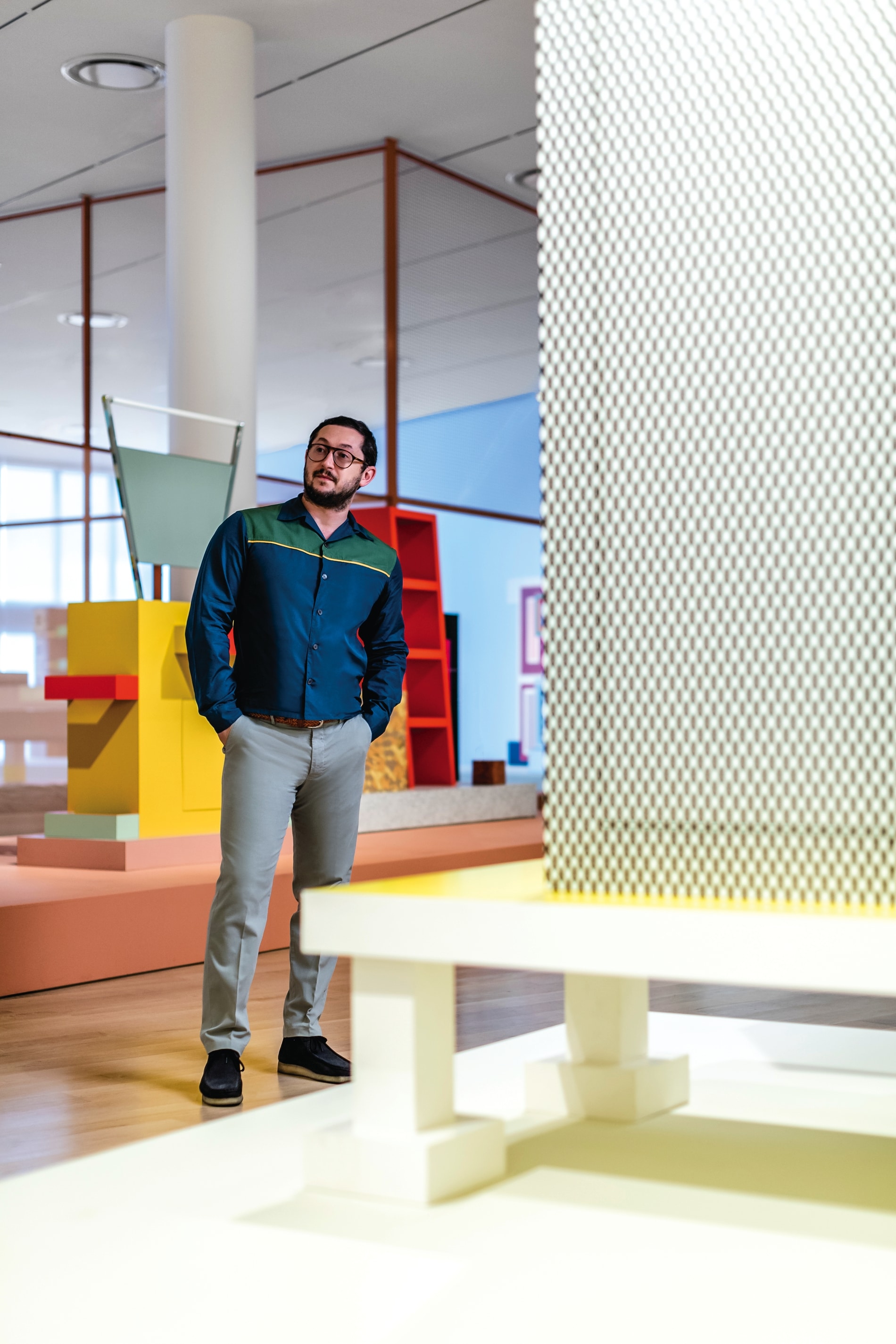 ICA Miami Director Alex Gartenfeld is celebrating the museum’s fifth anniversary with five of its most ambitious exhibitions to date.

Alex Gartenfeld says it takes a group effort to consistently bring notable artists to the Institute of Contemporary Art, Miami, but members of the museum’s board insist it’s Gartenfeld’s leadership that deserves credit for why the museum has made such a giant splash in the country’s art pool in five short years. “He’s really been a driving force,” says board member Allan Yarkin. “He has a global reputation. And he’s a terrific human being.” Following the wild success of a Judy Chicago survey, Gartenfeld ushers in ICA’s Art Week exhibitions this month. The first is a comprehensive museum survey of American artist Sterling Ruby (through Feb. 2), which incorporates more than 100 works in various mediums. “It’s the first time the museum is devoting two floors to one artist,” says Gartenfeld. “His work will be familiar to many as an artist and fashion designer. But we’re dedicated to introducing viewers to another side of his practice.” ICA will also host a paintings showcase by Agustín Fernández (Dec. 3-April 26), which Gartenfeld describes as “seductive” and “hyper-real,” video works by Wong Ping (Dec. 3-April 26) and two site-specific installations: one by Carlos Sandoval de Leon (Dec. 3-April 19) based on found objects and another by Odili Donald Odita titled “Mamba Negra,” promoting respect between straight and LGBTQ communities, that will be revealed on Dec. 1 and will stay up until Nov. 30 of next year. Now that the museum has matured, Gartenfeld is considering ICA’s acquisitions closely. “We’ve been expanding the collection rapidly but intelligently,” he says. “When we set out to create the museum, we knew there was a need for what we were doing. Our success is determined by how unique we are.” 61 NE 41st St., Miami, 305.901.5272 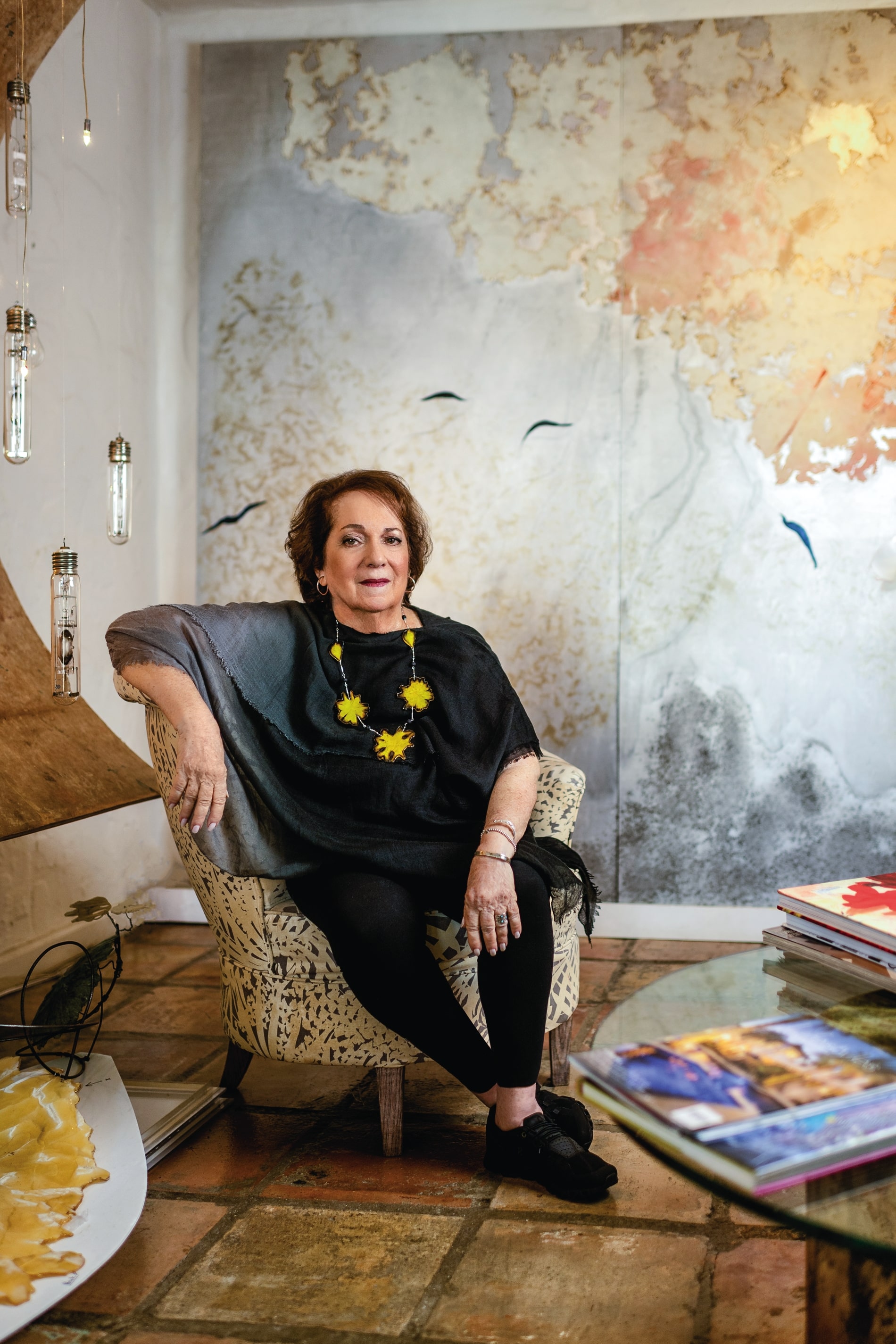 In her six decades as an artist, Mira Lehr has created a prolific oeuvre of work.

Mira Lehr’s North Miami Beach studio is tucked away in a very secluded neighborhood, yet her neighbors know she is working when they see clouds of smoke. “They think I’m crazy,” she admits. But then they see her work, typically ethereal large-scale abstract paintings reflective of nature in all its glory, sometimes with somatic features from fire, fuses and gunpowder, and they understand the statement Lehr is aching to make. “It gives a certain texture and resonance to the work,” she explains. “It has something dynamic in it. It also, philosophically, is the other side of creation. It’s a commentary to remind people everything is transitory.” Having lived in Miami for most of her life, Lehr has seen—and participated in—its evolution in myriad ways, and justifiably she will be celebrated at the Jewish Museum of Florida–FIU with A Walk in the Garden (through Feb. 3). The exhibition honors her six decades of art-making and features 10 of her paintings with more than 180 burned and resined sculptures dangling from the museum’s rotunda. “They have a glow to them,” says Lehr. “They’re beautiful colors and the stained glass reflects from them. It feels like a garden. A very celestial one.” 301 Washington Ave., Miami Beach, 305.672.5044 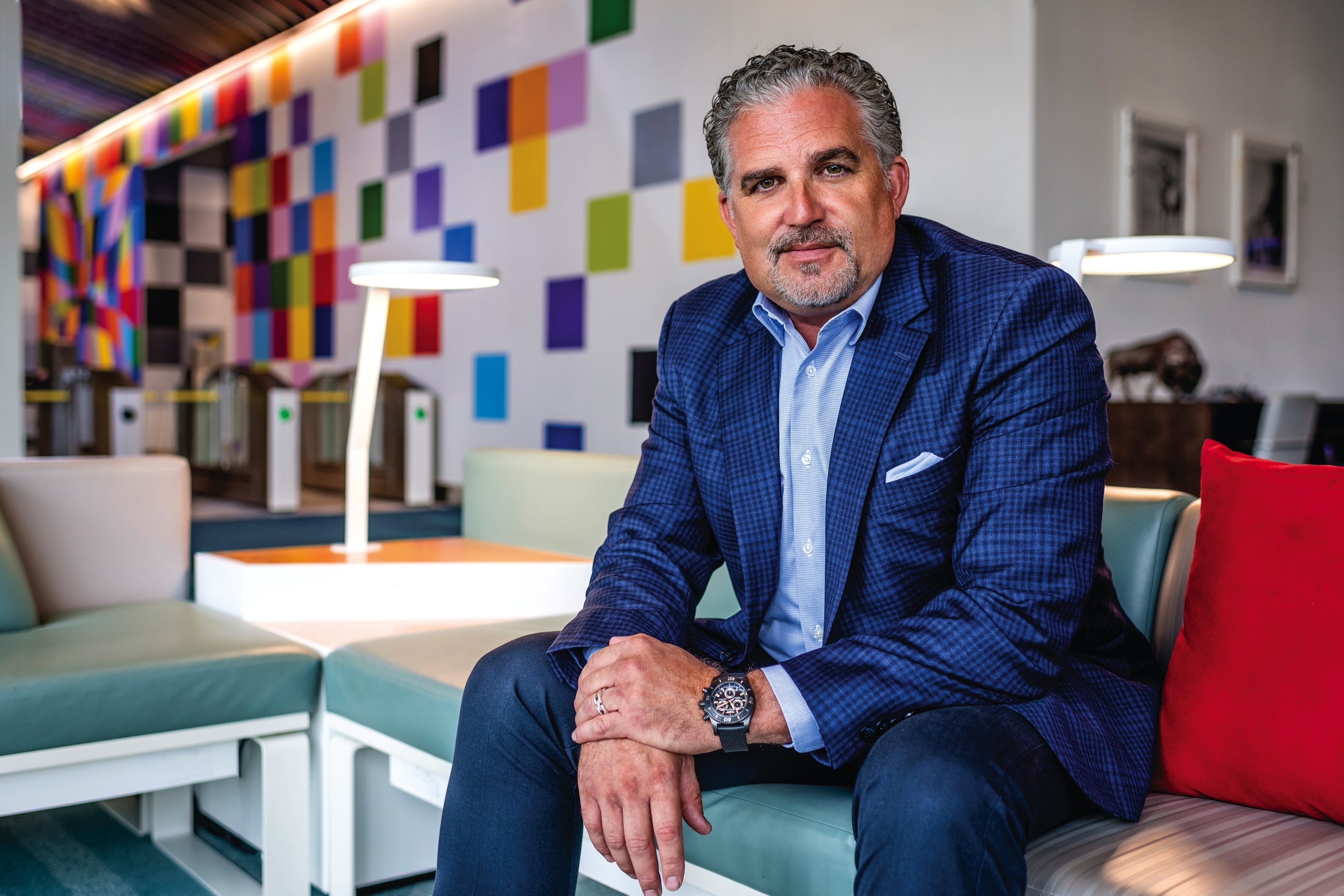 Nick Korniloff has created art fairs that have exposed Miami to thousands of artists from all over the world.

Originally from Long Island, Nick Korniloff never thought he would become one of South Florida’s art world pioneers back in the late ’80s while he was a student at FIU. “I always wanted to be in the restaurant and hotel industry,” he recalls. As fate would have it, his first job was serving as event/facility manager at the Miami Beach Convention Center for Art Miami. By 2009 he owned that fair and, with developer Tony Goldman’s help, launched Art Wynwood in 2012. Next came CONTEXT, Aqua and Palm Beach Modern + Contemporary. All these illustrious fairs are “driven by quality, depth, diversity and representing reputable international galleries,” he says. Though Korniloff remains the face and director of all the aforementioned, the world’s largest event producer, London-based Informa PLC, purchased his company in May. “It was a tough decision,” he admits. “But the most important element was to make sure that Art Miami, which is celebrating its 30th anniversary, would always continue on and have the most real-time infrastructure and support needed.” The purchase helped Korniloff improve the fair in ways he could not afford to prior, like eliminating fuel-eating generators and improving security and lighting. “These are things I only dreamed of doing as an entrepreneur,” he says. Art Miami also has more exhibitors than ever and a whopping 16 food and beverage outlets this year, while he promises the essence and visitor experience will be better than ever: “Being situated where we are on the water, we’re able to have more serenity and slow the pace of Art Week.” Art Miami & CONTEXT, Dec. 3-8, 1 Herald Plaza, Miami, 800.376.5850; Aqua, Dec. 4-8, Aqua Hotel, 1530 Collins Ave., Miami Beach 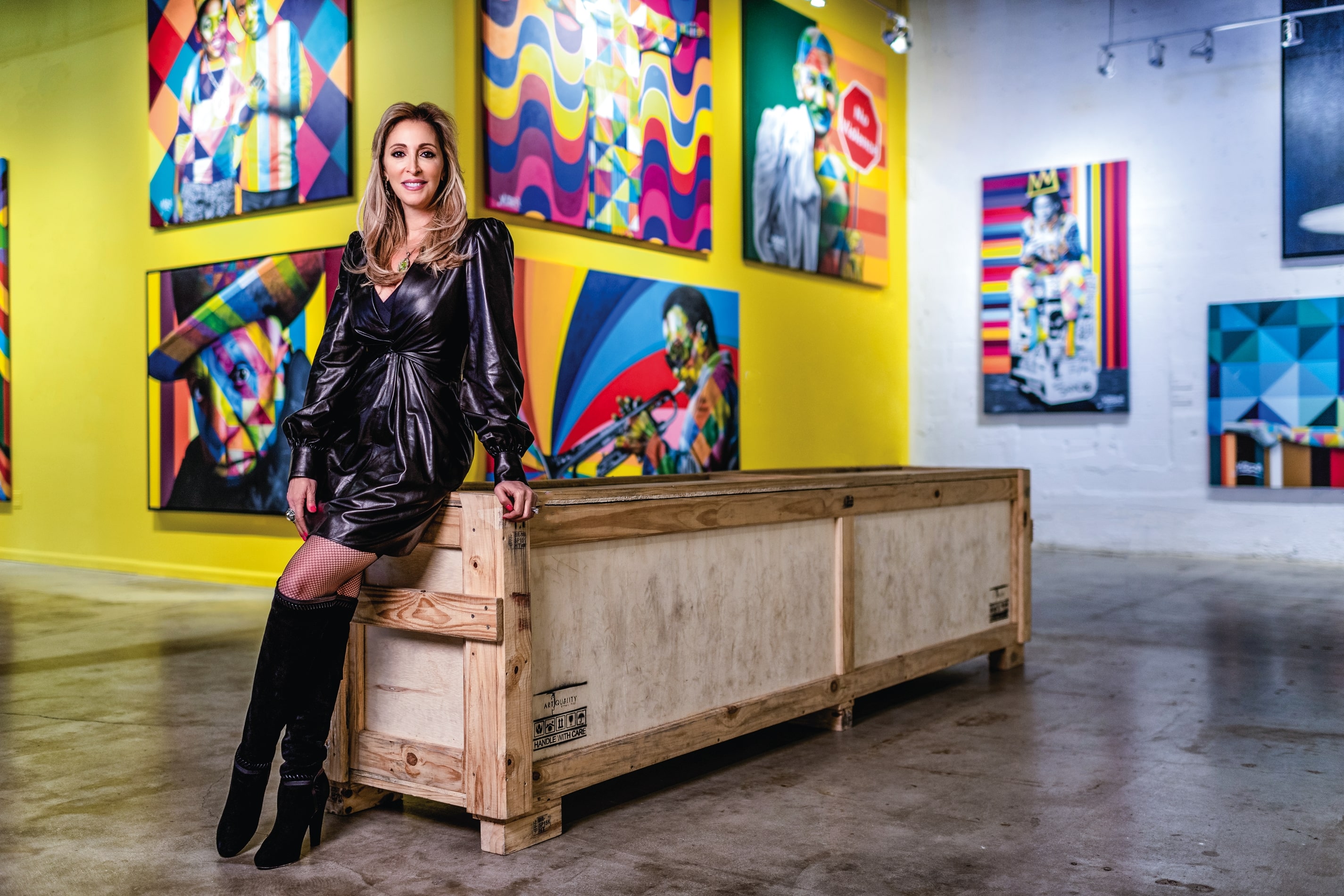 Through her efforts with Wynwood Walls, Jessica Goldman Srebnick has helped to change people’s perception of street art.

It’s hard to believe Wynwood was once a rundown, largely idle warehouse district, but Tony Goldman saw its promise and his family, including son Joey Goldman and daughter Jessica Goldman Srebnick, spearheaded the effort to turn part of it into what is now considered the world’s largest open-air museum. Today, Goldman Srebnick, the CEO of Goldman Properties and founder of Goldman Global Arts (GGA), a creative think tank partnering large organizations with artists, has the distinct honor of celebrating Wynwood Walls’ 10th anniversary. “Through Wynwood Walls we created a platform for a revolution of street art,” she says. “The appreciation for this type of art has changed globally. People’s perceptions, admiration, careers—we’ve played a really interesting and pivotal role in that discussion.” To celebrate the milestone, she teamed up with prolific writer Hal Rubenstein, a longtime friend of the Goldmans, and photographer Martha Cooper, who has been photographing Wynwood Walls since its inception, to create Walls of Change: The Story of the Wynwood Walls ($60, Assouline). “It’s about human connection, memories, personal stories, reflections, impact. It’s about hope,” Goldman Srebnick says of the 240-page chronological compendium featuring more than 100 murals and 100 artists. “It’s a really appropriate name for the book.” Those artists will all be recognized during Art Week at one of GGA’s two galleries, while the other celebrates the 30th anniversary of Shepard Fairey’s “Obey” campaign. Fairey’s exhibition will be up from Dec. 3 through part of January, while the group exhibition will have its preview Nov. 29 and remain up until December 2020. Goldman Srebnick’s next big reveal has to do with her role as Super Bowl Host Committee co-chair. “It will be the most artistic-infused Super Bowl you’ve seen, ever,” she promises. No doubt. 2520 NW Second Ave., Miami, 305.531.4141 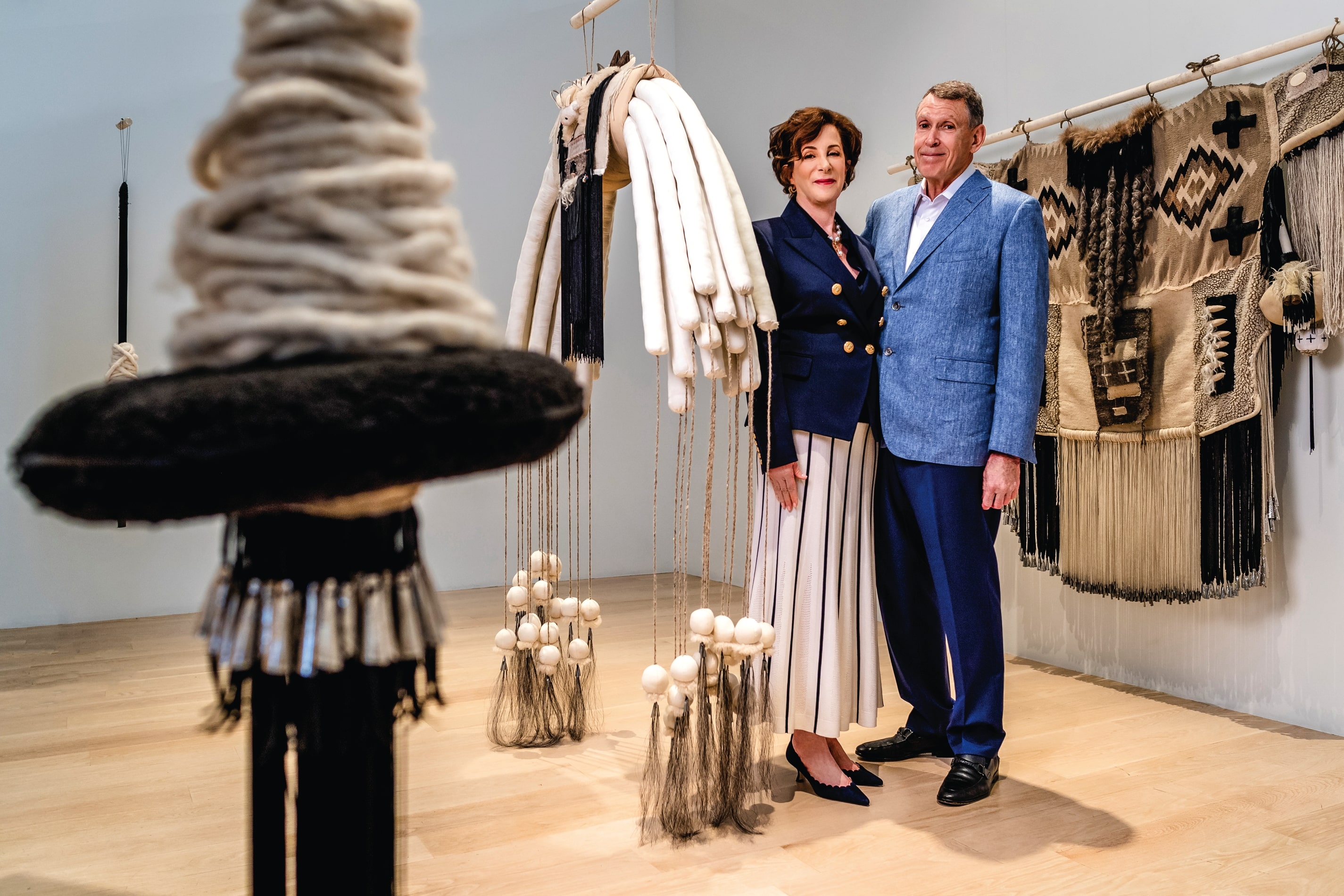 Ray Ellen and Allan Yarkin may just be Miami’s most under-the-radar art benefactors.

Even with a collection of nearly 400 works, more than a decade of combined service on the boards of two of Miami’s most impressive contemporary art museums (first MOCA, North Miami and then ICA Miami), and a history of welcoming thousands to their home annually to experience their bounty, self-professed “art junkies” Ray Ellen and Allan Yarkin have largely managed to fly under the radar. “We’re fairly private,” says Ray Ellen. But after donating 18 works to the ICA recently, locals wanted to know more about the benefactors. Here’s the brief version: Ray Ellen is a former attorney and Allan is a wealth manager. They met in their late 20s and started collecting art after befriending the owners of a gallery on Kane Concourse. While they relish the relationships they have developed over the years with fellow members of ICA’s board of trustees, especially Norman and Irma Braman and the team Ray Ellen labels “the museum’s hard-working staff,” the couple most enjoy dining with artists and learning what makes them tick. “That’s a big perk of being on the board,” says Ray Ellen. While Allan’s office walls also display pieces from several Miami-based artists, the Yarkins agree their prized possession is a Lee Krasner painting they acquired 30 years ago. “We don’t collect a particular era or genre,” adds Ray Ellen. “We don’t agonize or do a lot of research. We just trust our instincts.”