Billy Magnussen's Hero's Journey To Bond And Beyond

After more than a decade of hard-won success in film, TV and even a Tony nomination on Broadway, Billy Magnussen is on the verge of having one colossal year, including a star turn in No Time to Die—the latest James Bond thriller. 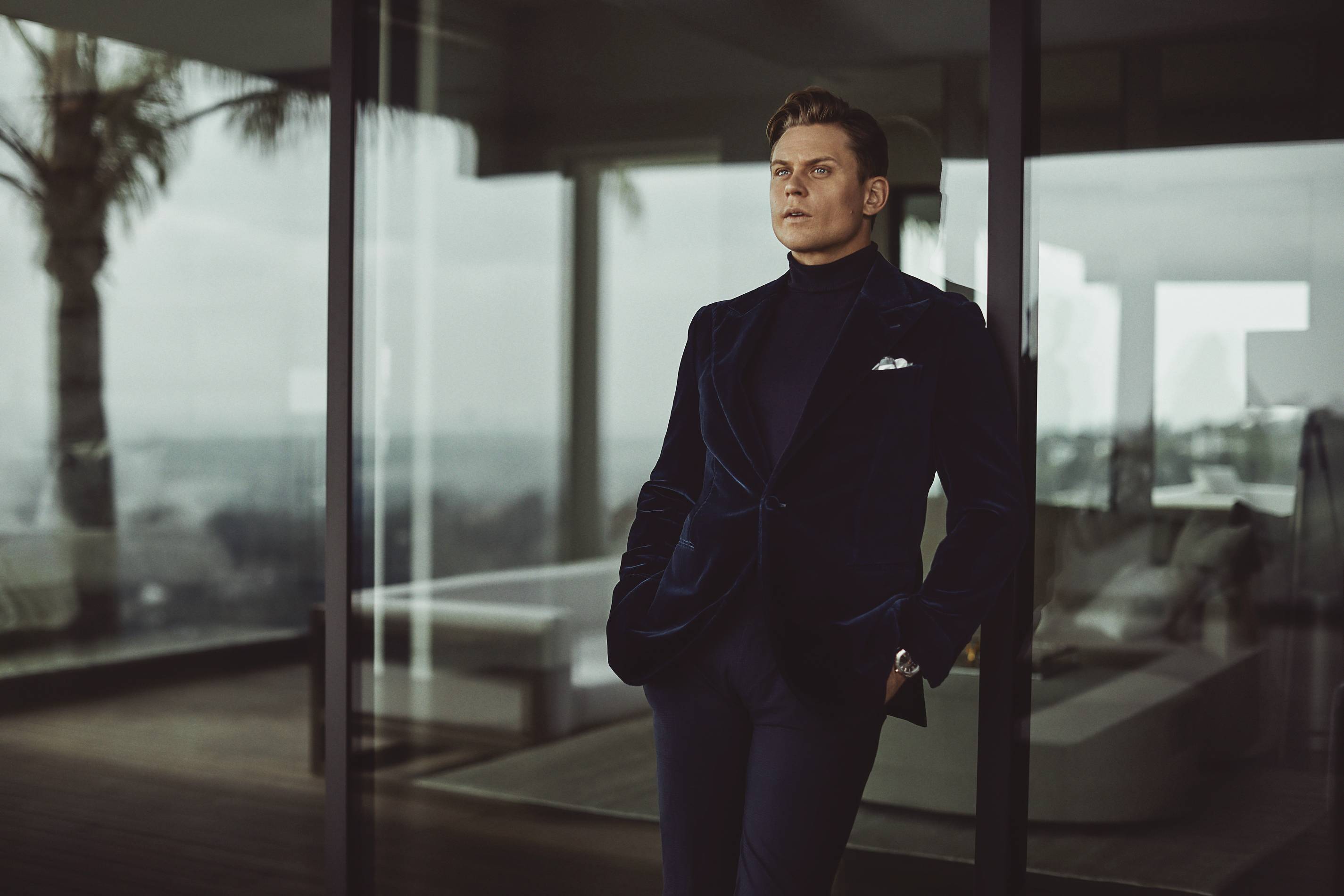 Billy Magnussen, seemingly the happiest human in Hollywood, negotiates the endless slog of an L.A. freeway at 10:30 on a cloudless Monday morning and wants to talk about a race 3,000 miles from home. Specifically, the Dewey Beach (Delaware) Triathlon. “Is it a blast?” he asks, as if my answer will change the course of his life. I tell him it most certainly is and casually mention the craft beer trucks perched on the beach at the finish line. “You must get me info about that race! Seriously, man, I’ll do it,” he says.

And I believe him. It’s difficult not to feel the tsunami of enthusiasm crashing from the world of Magnussen and his many passions. He’s training for the Los Angeles Marathon and an Ironman triathlon (“I ran 12 miles yesterday!”). He adores escape rooms (“What? You’ve never done them? You must! I don’t do bars any longer—I do this. It’s all about teamwork and community.”). When Magnussen was in his 20s (he turns 35 in April), he played in New York City-based indie band Reserved for Rondee. “That was crazy,” he says, laughing. “I was doing the soap opera As the World Turns, so to fill some downtime I formed a band with another guy on the show, a bongo player I met on the street corner and a guy I went to college with. It was just a hobby for fun, and it started paying for itself. We literally played from London to Los Angeles.”

If we’re lucky, we meet a handful of charismatic guys like Magnussen in our lifetime. It’s usually by chance—at a nearly deserted airport bar during a layover or will call at a Chili Peppers concert—and the world pauses. The Magnussen type will share stories leavened with wonder, earnestness and incredulity. And every single one of these equally superb and strange tales will feel, well, downright cinematic.

Magnussen—who has been nominated for a Tony for his work opposite Sigourney Weaver on Broadway, appeared in Emmy-nominated Black Mirror on Netflix, joked around with Jason Bateman and Rachel McAdams in the quirky hit Game Night and starred in a range of TV series like Get Shorty—is on the verge of hitting another story arc in his 13-year career. He’s part of an all-star cast in the new James Bond film, No Time to Die. In September, Magnussen will star opposite Jon Bernthal, John Magaro and Ray Liotta in The Many Saints of Newark, the movie prequel to The Sopranos. He also recently wrapped filming biopic Harry Haft in Budapest; it’s directed by the legendary Barry Levinson. Magnussen calls the Haft experience the most rewarding of his career.

To get a read on how the actor grapples with these triumphs and the unpredictability of the entertainment industry, view his Instagram (@billymagnussen). His bio says it all: “Who knows, it might just work out!” It would be a mistake, however, to think Magnussen is simply drifting through the business of Hollywood like a young, lucky rube with a latter-day Kirk Douglas chin and perfect hair. He’s whip-smart, has an impressive recall of film history and has worked tirelessly to get to this moment. “You need to step up when every opportunity arises,” Magnussen says. “You have to really risk it all. If you’re not, then it’s not worth doing.” 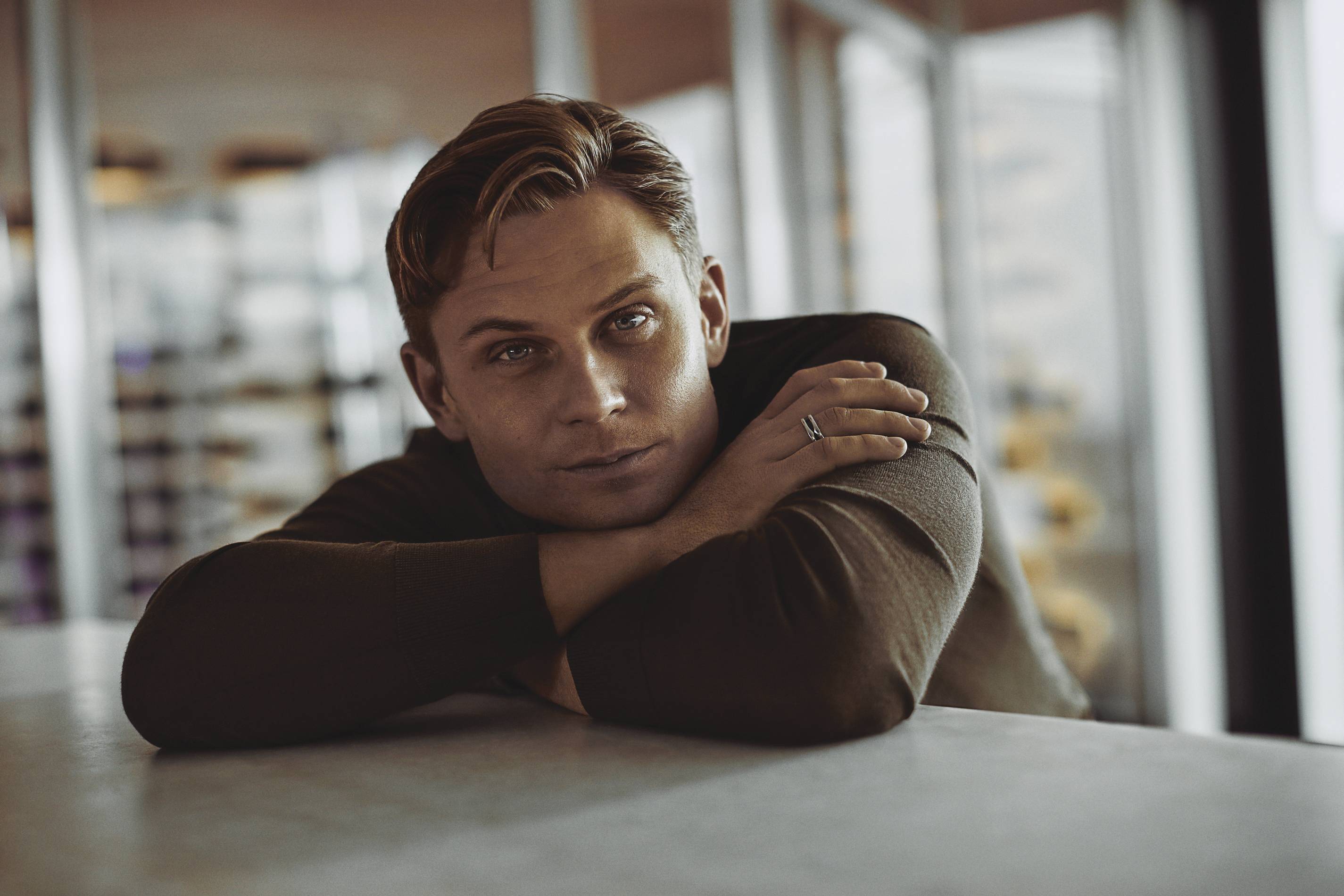 Versatility, even in comedy, has been a calling card for the actor. Like his comedic idols Charlie Chaplin and Robin Williams, Magnussen mines a brilliant physicality that reveals both strength and frailty. Watch him clumsily crawl through an open window in Game Night and attempt to explain away the idiocy of his latest girlfriend to his friends. Or take in his portrayal of Prince Anders in Guy Ritchie’s live action version of Aladdin. In both roles, there’s beauty in his off-balance, jittery riffs, revealing our collective venerability while pretending to be in complete control. “More often than not, humor is about playing the truth,” Magnussen says. The laughs come, he explains, when those truthful circumstances deliver crazy reactions.

What’s not crazy is how he got to this point. The Bond brand is legendary, and No Time to Die will forever place Magnussen among a special class of actors who’ve been part of the series. “It’s a pinch-myself moment, and to be part of this is an honor,” Magnussen says of his role as CIA agent Logan Ash. Naturally, he’s a fan of the series and understands its decadeslong appeal. “Everyone has that hero’s journey in them,” he says.

He’s particularly excited about this iteration of Bond, marking No. 25, because its director, Cary Joji Fukunaga, is the first American to direct a movie in the series. Magnussen previously worked with Fukunaga on Maniac, a limited series on Netflix also starring Emma Stone and Jonah Hill. “In this industry, there are lots of people who are just colleagues, but I’m happy to call Cary a friend. I love him,” says Magnussen. “He’s one of the hardest-working guys in this business, always pushing to do something better. He operates on a different level and brings so much excitement and a different perspective to Bond. And the fact that he got Hans Zimmer and Billie Eilish to do the music—are you kidding me?”

Our conversation sprints in another direction, with Magnussen diving into his best Queens accent. “I grew up in Queens, and so did my dad,” he says. I can’t help but tell him I found an old publicity video on YouTube called “A Day With Billy Magnussen.” The video’s callout to viewers reads like another lifetime: “What’s a normal day like for Broadway’s studliest Tony nominee?” In the short piece, he rides around New York City on a bike with actors Neka Zang and Tessa Alves. At one point, Magnussen hoists his legs off the pedals and places them high on the bike’s frame at the base of the handlebars. Standing on the frame, he rolls confidently down a crowded Manhattan street, performing a long, dangerous trick. It’s not exactly a Cirque du Soleil move, but, for the crowded byway of the Big Apple, it’s audacious as hell.

Which veers our chat back to passions outside work, as I ask Magnussen if he still performs the bike trick now that he lives in L.A. “The bike trick? No, I’m getting too old for that!” he says. Besides, he’s too busy as a partner in his side business, Foxhole Hollywood, which provides a space for upcoming artists, including actors, musicians and comedians, to perform their work. He’s also writing movie scripts, with ambitions of directing a feature soon.

“But I did play golf this morning,” he offers. Did he walk the course? “I sure did—walked it with my brother and two business partners from the Foxhole Hollywood. So much fun, man. So much fun.” He says it with customary Magnussen conviction, like it’s the best damn thing to do at this moment, in this place, on this beautiful, whirling planet. And I believe him.