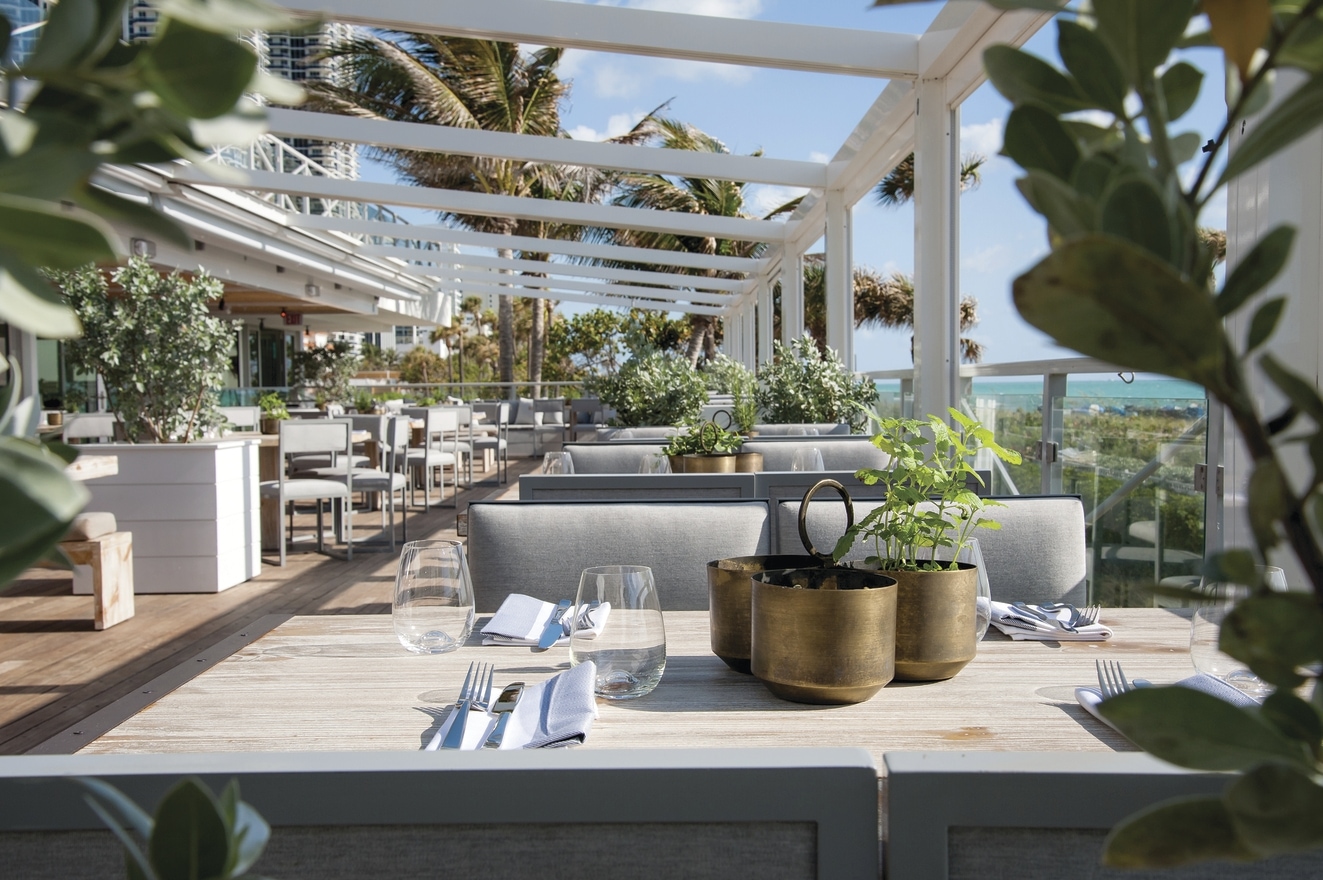 From the outside, the Eden Roc Miami Beach hotel seems much the same as it has since it was finished in 1956: Stately. Storied. The Morris Lapidus-designed, Miami modern neighbor of former rival Fontainebleau Miami Beach.

Inside, the waterfront property is a far more global, complicated picture. The Eden Roc runs 418 of the rooms, while Nobu Hotel Miami Beach, a boutique hotel within it, operates just over 200 of the rooms as well as the dining amenities. Those restaurants include the renowned Nobu Miami and relative newcomer Malibu Farm Miami Beach.

The East Coast sibling to chef Helene Henderson’s popular California eatery Malibu Farm Pier Café and Restaurant, Malibu Farm Miami Beach is one of the few restaurants here that sits almost directly on the waterfront. Located at the back of the hotel, past the main pool and up a set of exterior steps, it’s a little hard to find despite signage. On bright, humid days, it’s a bit sweaty under a retractable roof that blocks the blare of sun and occasional downpour, but also traps away the breeze. But, from the rustic wood tables, under strings of bulbs that light up at night, the view of the Atlantic is everything your travel app promises about the Magic City.

A former model, Henderson takes a natural approach to food preparation. With items ranging from fresh-pressed agave lemonade to raw chia pudding with banana and maple, the Swedish native’s restaurant dovetails into many wellness dining trends: local, seasonal, gluten-free and vegan. However, while some of the dishes read like a challenge, none of them taste forced. For instance, a raw Brussels sprouts salad might sound like the last thing you’d want to eat while in a belly-baring bathing suit, but the miniature cabbages are shaved, intertwined with leaves of tender baby arugula and softened by the acids from a smart mustard-lemon dressing. Slivered almonds add texture back in almost unnoticeably, and a garnish of watermelon radish slice curls on top like a flower petal for visual appeal.

That watermelon radish reappears often to highlight dishes, but another salad, the salmon nicoise, has no need for additional hues—it’s a color wheel of a plate. The pale-pink salmon, perfectly seared, is complemented by a hard-boiled egg that’s been dip-dyed in beet juice. Halved heirloom tomatoes, Kalamata olives, al dente haricots verts and firm fingerling potatoes are arranged around a mountainous heart of kale and arugula tossed with capers and an umami-invoking olive dressing. It’s a dish that’s as filling as it’s beautiful, which is the case often here. The Swed-“ish” Meatballs, for instance, are a pleasing combination of ground chicken mixed with ricotta and dotted with peppercorns (this is also one of the few dishes that nod to Henderson’s homeland).