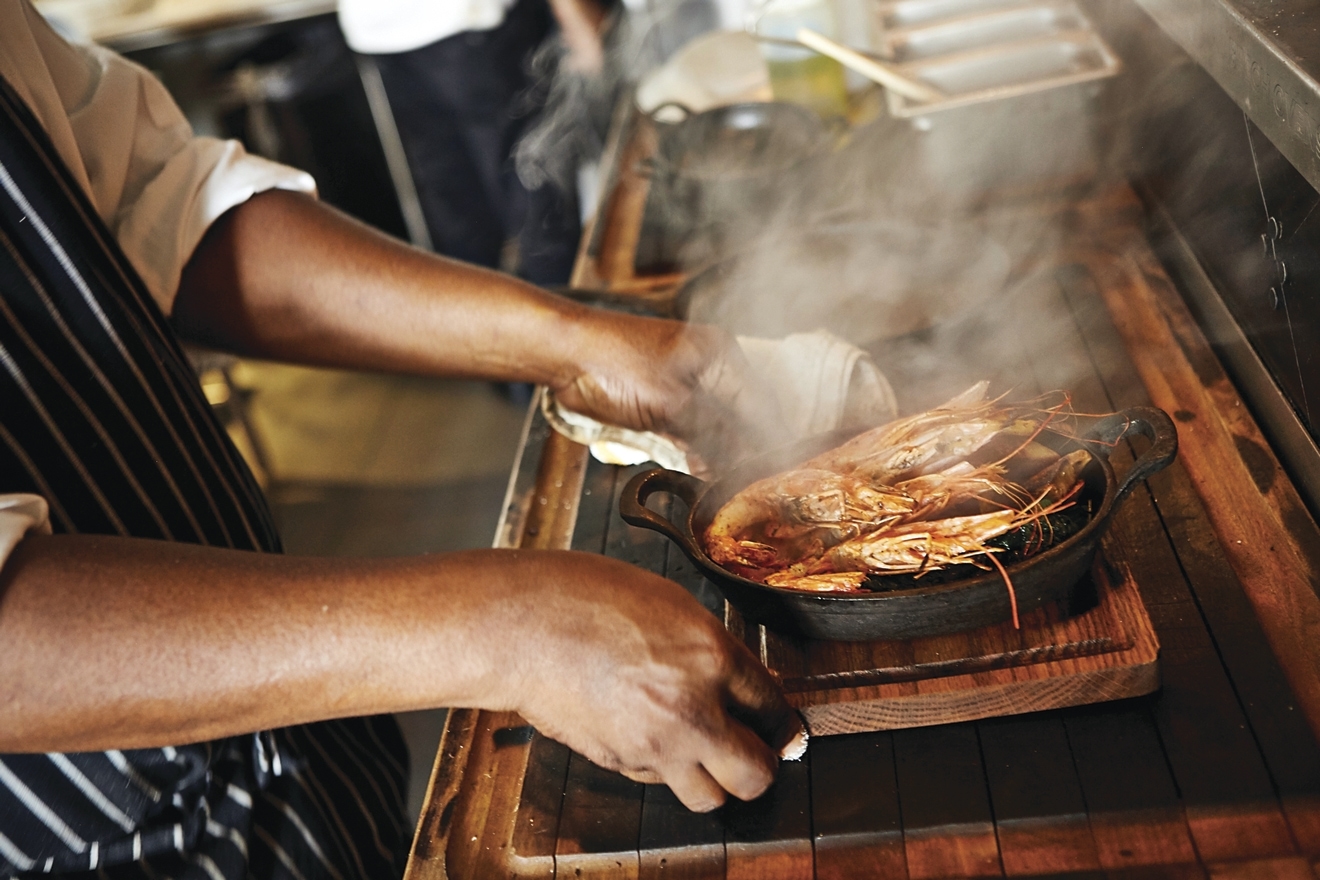 When a subtropical city such as Miami is edged by seawater, crisscrossed by multiple canals and has a river running through it, what would you expect our epicures to currently be focusing on? Why, cooking over leaping flames, of course!

Yes, if it burns so hot that the red turns to white and blue, chefs want it—in open kitchens, no less. High electric bills for air conditioning be darned.

The latest entry to the Magic City’s ring of fire is Uruguayan restaurant Quinto La Huella, located at EAST, Miami, the flagship hotel in the $1.05 billion behemoth that is Brickell City Centre. It is the first sibling to the rustic seaside Parador La Huella, a parrilla concept famously lauded time and time again by foodies and critics all over the world. At the new Quinto, owners Martín Pittaluga, Gustavo Barbero and Guzmán Artagaveytia have reinvented Parador as a stylish city restaurant, named in Spanish—quinto—for the floor of the hotel that it occupies.

As it is in Uruguay, the blackened steel parrilla is the highlight of the place, and Executive Chef Nano Crespo is the man in charge. Studio Collective designed the 9,700-square-foot restaurant around it so that patrons can choose to sit in any of a few locations: the extensive dining lounge, which boasts natural wood and shades of canvas and includes a library-like bar; the patio that overlooks the so-called Climate Ribbon, the artsy trellis that connects all three blocks of City Centre; or the patio that frames the parrilla. It all depends on how close you want to be to the fire. If you prefer to keep your distance from both engineered heat and Miami’s native convection, the interior spaces are cool but not chilled to the point where your skin puckers like the whole young chicken you’re considering for dinner. This nonmeat locker vibe is pleasantly refreshing and reason enough to schedule return visits. Another one is the meat locker itself. The grass-fed beef, more mineral-tasting than corn-fed Angus, is imported from Uruguay, as is the white and red oak that’s used to char it to the guest’s requested temperature on the parrilla. The entrecôte cut, a rib-eye, is especially juicy, although you can never go wrong with the thinner, chewier and slightly more flavorful entraña, or skirt steak, either. If you like your fare on the rare side, however, do say so. Medium to well done is the South American default, and if you don’t specify, you’re going to get your meat cooked through.

Indeed, despite the local or regionally sourced products, Quinto La Huella is South American through and through, from the servers who have Uruguayan accents to the fried empanadas that are served complimentary at the beginning of each meal. Even items that are common to other restaurant menus, such as battered and fried calamari, are given Latin twists: Here, that dish is served with a tasty but not fiery pimento-infused dip.

If beef isn’t your gig, start with the appetizer of grilled provolone, a sizable block of mildly volcanized cheese studded with herbs, and ask about the fish of the day, which is also cooked on the parrilla. During my visit, it was a succulent whole red snapper, deboned and headless, that was notable for its freshness and clean flavor.

Items that are not cooked on the parrilla or a la plancha go through a wood-fired oven, such as the side of mashed potatoes, which arrives in a casserole dish, and the main course of steamed clams, which are plump and savory. Few things aren’t touched by flames, but among them is a side of house greens that should be an imperative for every diner. Just bitter enough, these greens are an excellent complement to the grilled meats, chicken and fish, and nearly negate the need to begin with a plate of quinoa, grilled escarole with white anchovies or Tuscan kale with olives.

What’s inescapable is the necessity to close with Pastry Chef Florencia Courreges’ house dessert, the Volcán de Dulce de Leche. It’s the Latin update to the chocolate bombe cakes that we all grew so tired of in the ’90s and bleeds dulce de leche goodness when it’s cut into—its sweetness is tempered by a scoop of banana ice cream and a pecan shortbread cookie. Of course, you’re welcome to also enjoy the cool lime tart for something slightly less rich. But when the theme of Quinto La Huella is fire, why not end with something so steamy and delicious that your palate lights up for hours?