Germane Barnes is redefining the future of architecture and design by building hospitable spaces for everyone. 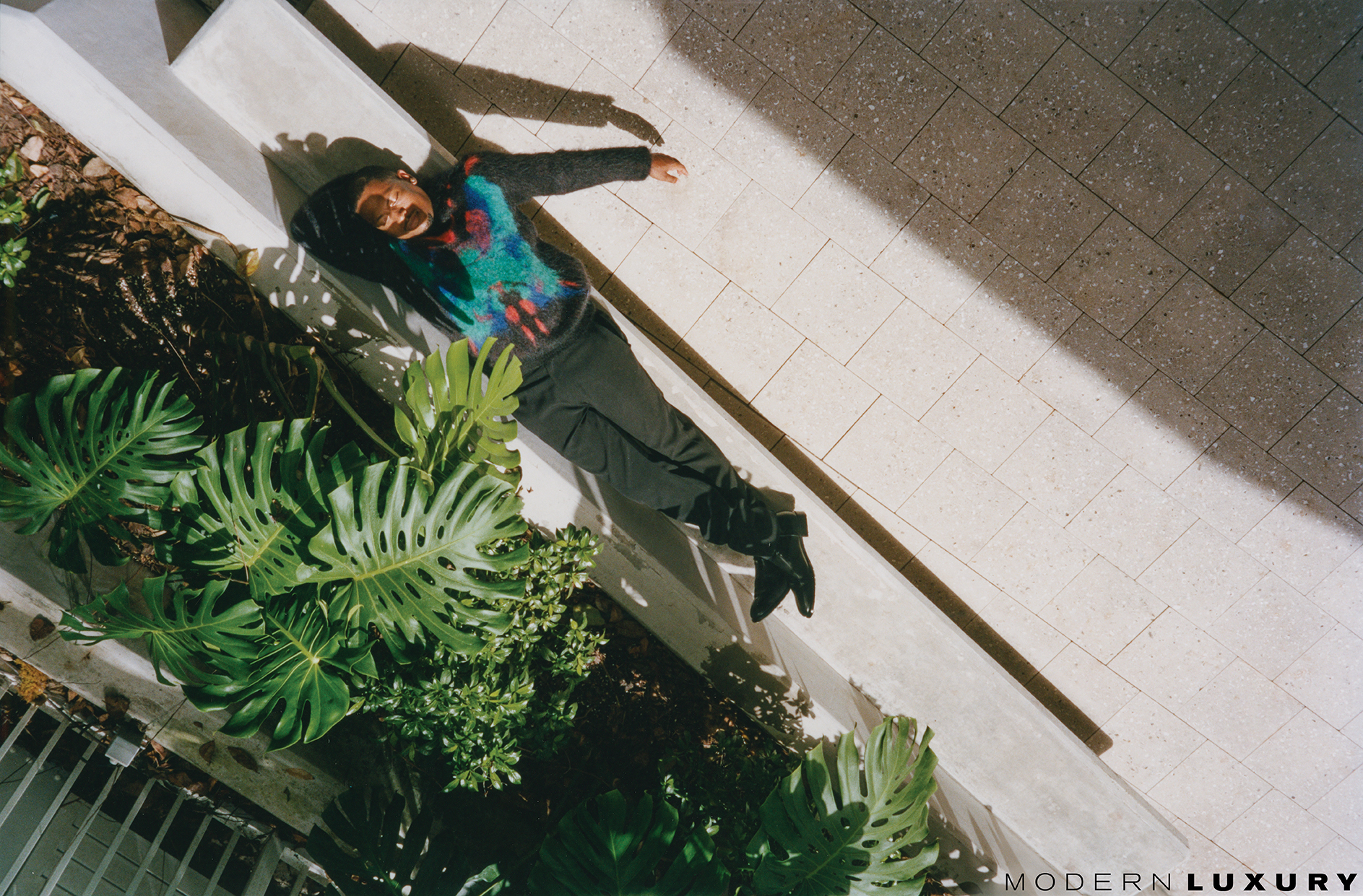 Germane Barnes (germanebarnes.com) has always wanted to be an architect. Growing up in Chicago, he garnered an early understanding of how urban planning and the built environment can impact communities by dictating movement and modes of living. Following his civic principles, Barnes opted out of a major international opportunity, choosing instead to relocate to Florida for a commission in the economically distressed Opa- locka neighborhood. This bold move set in motion design commissions, art exhibitions and awards, establishing his own design and architecture studio he called Studio Barnes LLC and securing an assistant professorship within the University of Miami’s architecture department, where he is also the director of the Community Housing & Identity Lab (CHIL). 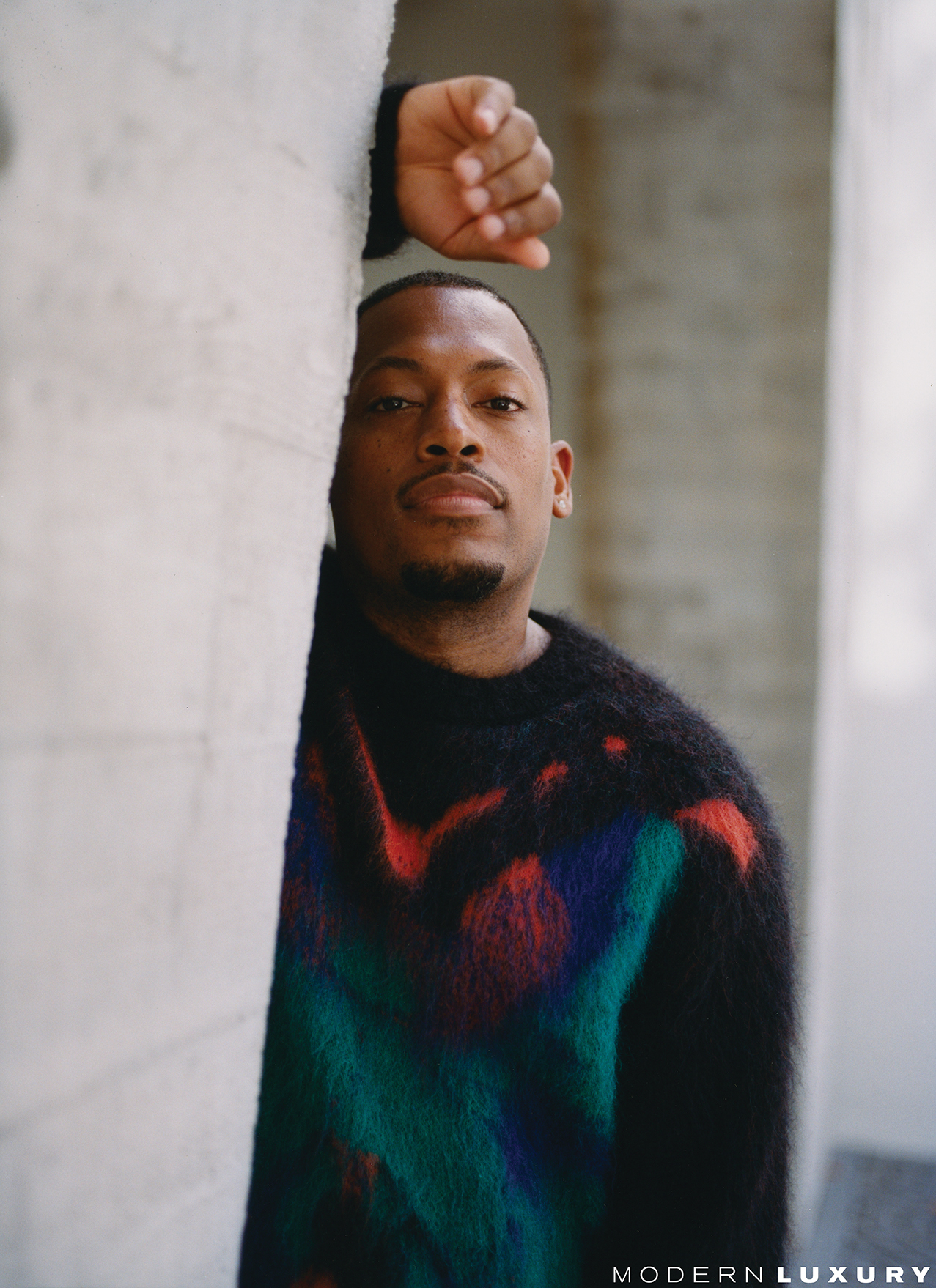 Barnes’ relaxed persona belies a self-assured conviction. On one hand, he embraces expansive creative approaches freely melding the fields of art, design and architecture, and on the other, Barnes is hyperfocused on impactful place-making. This multipronged, acute approach catapulted his creative trajectory, earning him significant local, national and international recognition—these past two years adding the Harvard University Graduate School of Design Wheelwright Prize, the Rome Prize and the Museum of Modern Art New York (MoMA) to his growing list of accolades. On home ground, Germane Barnes was announced winner of the prestigious 2022 Miami Design District Neighborhood Commission for his project Rock|Roll. Inspired by Caribbean carnivals, Barnes has created a series of interactive sculptures and wind chimes within the urban shopping mecca for art season, which will also playfully rock ’n’ roll at the entrance of the Design Miami/ fair Nov. 30 to Dec. 4.

Barnes’ first job at age 14 was as a mural painter for the Austin Public Library in Chicago where he co-designed and completed a 20-square-foot- long mural with four fellow teens. This foray into art making informed his approach to architecture throughout his University of Illinois Bachelor of Science in Architecture undergraduate degree, as well as his Master of Architecture degree at Woodbury University in Burbank, Calif. So, when he went to work with architect Francois Perrin, whose Los Angeles studio embraced a multidisciplinary approach, Barnes was matched to work on art installations. This included a project with renowned French artist Xavier Veilhan at the landmark modernist VDL House designed by Austrian American architect Richard Neutra. Veilhan, spotting Barnes’ talent and no doubt his French-speaking proficiency, recommended him to the Paris team of Pritzker Architecture Prize winner Jean Nouvel, where Barnes secured a position. However, it was not meant to be.

Despite being a life goal to work with a Pritzker Prize winner, Barnes did not pursue this opportunity. Instead, he had been concurrently collaborating with two of his professors, Christian Stayner and Jennifer Bonner (Stayner + Bonner), on an Opa-Locka Community Development Corporation (OLCDC) neighborhood transformation project called Made in Opa-locka. The five-year-long proposal aimed to transform the notoriously violent and drug-filled “triangle” into an area for small-business development in the arts, technology and community services—with Barnes being committed to move to Opa-locka as project lead.

Between completing his degrees, Barnes had spent four months in Cape Town, South Africa, where alongside studying he interned with Sean J Mackay Architects (SJM). A company with a mantra of thoughtful architecture, SJM initiated pro bono design projects in the city’s townships. Barnes’ experience of working in the Khayelitsha township, among other experiences, made tangible and evident the architectural and design tools that can impact living conditions and community interactions. So when Made in Opa-locka won the competition, Barnes decided that instead of being absorbed into an already-established architectural studio, he would bet on himself to garner individual recognition by working on a high-impact and meaningful community project.

In 2013, he moved to Opa-locka. Defined by Moorish architecture built in the 1920s and ’30s by industrial designer and aviation pioneer Glenn Curtiss—who had been inspired by films Ali Baba and the Forty Thieves and 1001 Arabian Nights—Opa-locka was being described as a dystopic Disneyland.

Barnes explains, “Floridians would ask why I moved from Los Angeles to Opa-locka based on the city’s negative reputation. To which I would respond, ‘Why not? How do I help a neighborhood if I don’t live in it?’”

Today, Made in Opa-locka has contributed to a sizable neighborhood revival, including renovating buildings for existing arts organizations and nonprofits, developing an auditorium, artist residency and media lab, and creating spaces within family homes for enterprise. Willie Logan, president and chief executive officer of OLCDC, affirms, “Made in Opa-locka is one example of our commitment to developing not only a fair and equitable environment but the immense potential in future generations. Germane’s role in that proposal was pivotal in his development, and we are incredibly proud of his accomplishments and future trajectory.”

This defining decision launched Barnes on an unstoppable artistic, design and architectural career. MoMA curator Mabel Wilson and then- associate curator Sean Anderson first contacted Barnes in summer 2019. After his second supposedly “failed” nominee submission to MoMA PS1’s Young Architects Program, Barnes’ portfolio was kept aside for a MoMA exhibition, transforming him, at age 35, into the youngest of 10 architects and designers to be featured in the historically groundbreaking exhibition Reconstructions: Architecture and Blackness in America.

For this exhibition, Barnes created A Spectrum of Blackness: The Search for Sedimentation in Miami, 2020— an installation of collages, a map and spices. Using Miami’s multiculturalism as a point of inspiration, Barnes created a dozen collages of porch and kitchen spaces of varied individuals, noting the rituals around each place. These were accompanied by a map denoting Miami’s geography, specifically its relationship to land ownership, segregation and the dynamics of sea level rise. Lastly, a spice rack installation shared spices relabeled after the activity or food associated with the seasoning, as it related to the Black lived experience.

Barnes shares, “This is my biggest accomplishment. Not for its monetary acknowledgment, but for its impact as the first Black architecture exhibition in the museum’s history in a city that is home to the oldest architecture department in the country.” 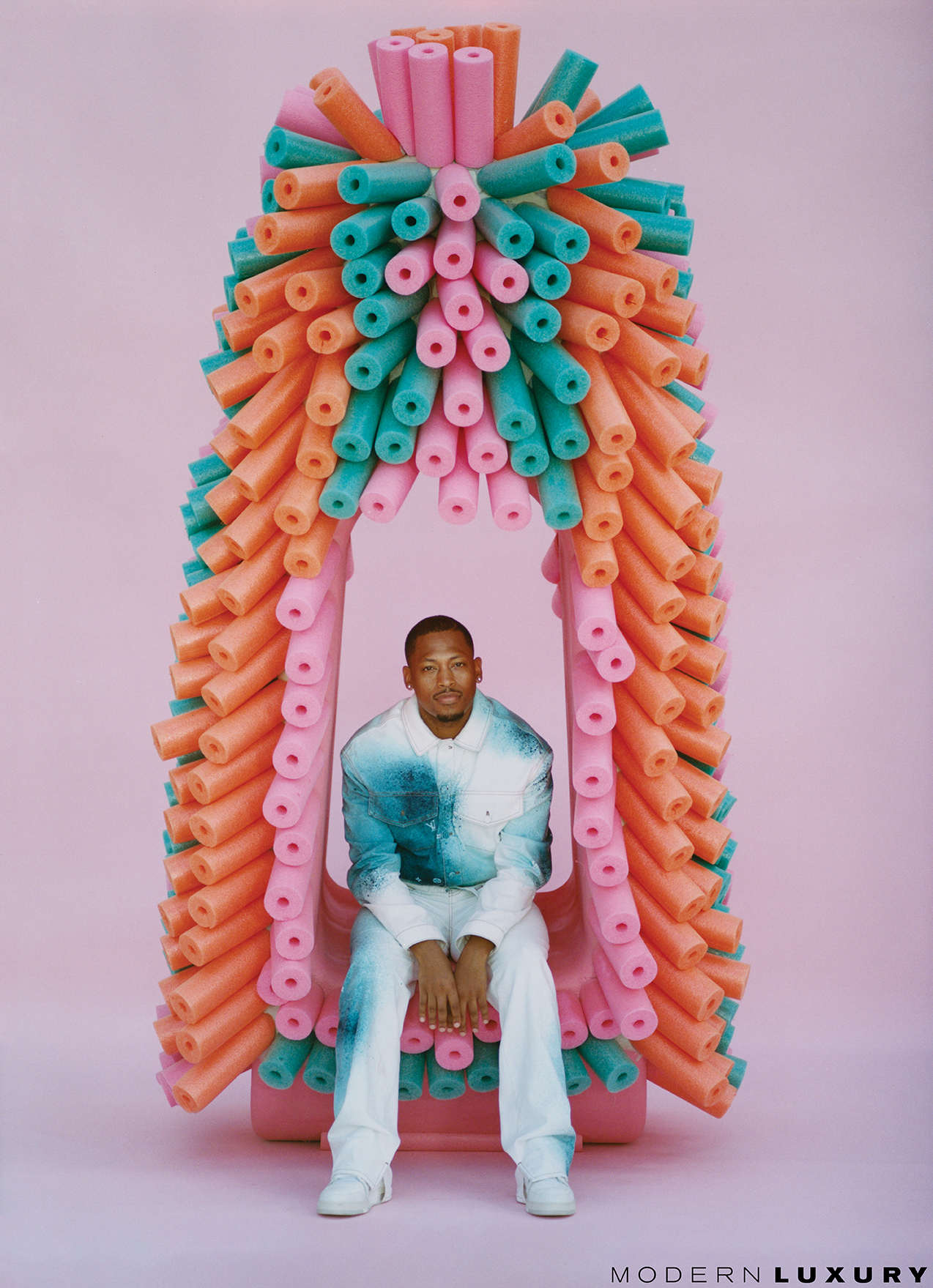 The publication of Reconstructions: Architecture and Blackness in America is now used as a lesson plan within the architecture department.

In 2021, Germane Barnes was commissioned by car brand Lexus to imagine its Design Miami/ booth.

“Up until this commission, I had only ever done projects centered around identity, Blackness and Black neighborhoods, and a lot of creatives who do ethnographic work get pigeonholed. Lexus was the first to say we just want you to create a design in line with our desire to be carbon neutral,” describes Barnes.

Design Miami/ Vice President of Fairs Grela Orihuela explains, “Germane did a brilliant job exploring a carbon-neutral future. A pair of elegant swings were placed at either end of the wire-frame car, meant to symbolize humanity’s trek toward a more sustainable future. Their placement rounded out the exhibit by creating a palpable feeling of forward motion.”

Barnes had also been announced a 2021 winner of the prestigious Rome Prize in Architecture, a prize recognizing cross-disciplinary innovation and excellence.

Barnes says, “In the centurylong history of the American Academy of Rome, I am the third person who identifies as Black, and the only Black male, to have won the prize in the architecture discipline, the field that founded the academy.”

In addition to a monetary acknowledgment, the Rome Prize awarded Barnes a seven-month stay in Italy in 2022, where he explored the often unacknowledged and misappropriated influences from the African continent on architectural processes in Italy, and more.

Curated by Wava Carpenter and Anna Carnick of Anava Projects, this year’s Miami Design District’s design commission nominees were asked to respond to the theme Something to Talk About. Barnes’ winning project Rock|Roll took this concept further. Drawing inspiration from the interactive and performative elements of Caribbean carnival, as well as its dynamism, color, sound and communal engagement, Barnes’ Rock|Roll celebrates Caribbean culture and Miami as a multiethnic city. 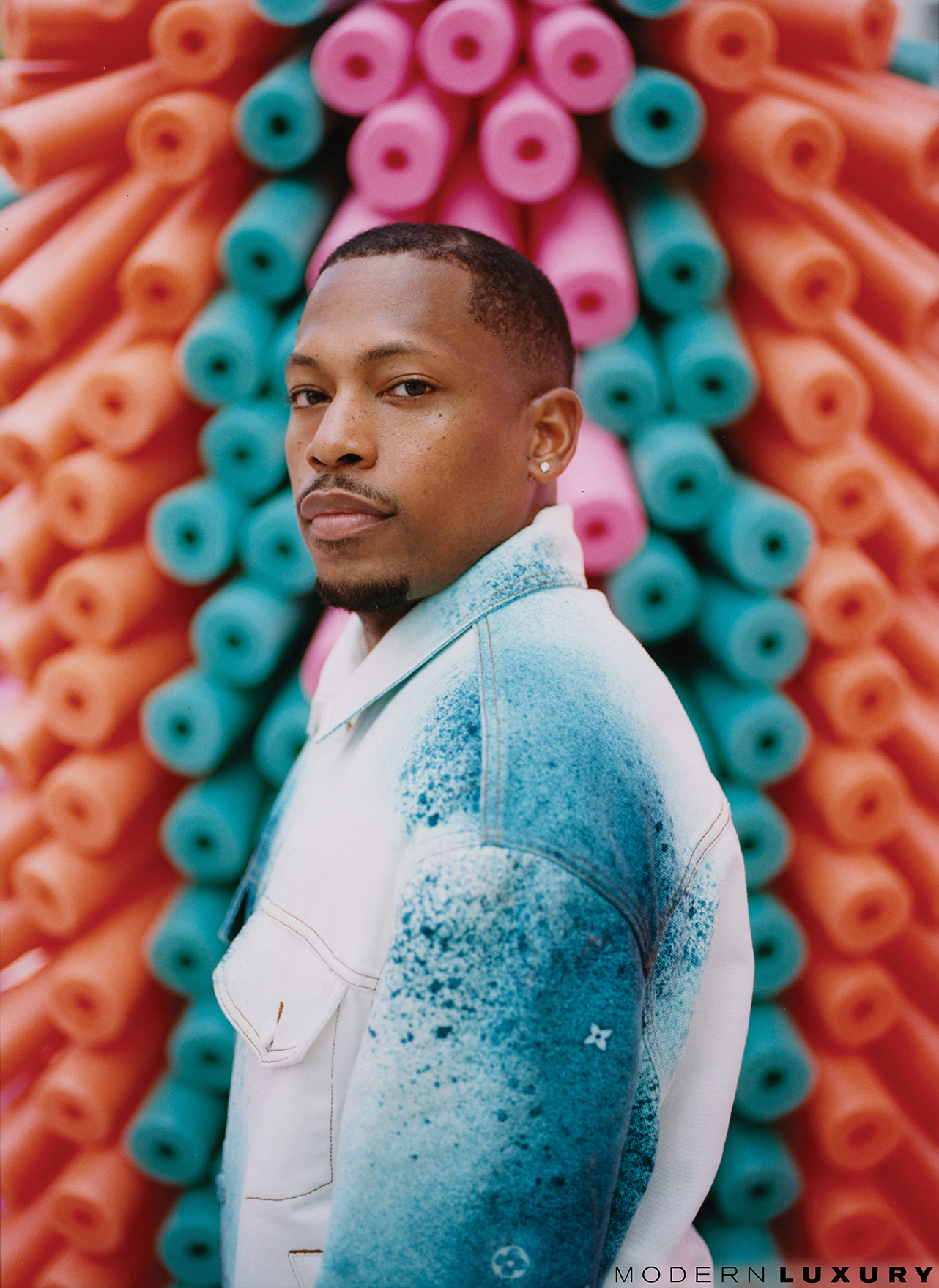 The word “Rock” represents large musical furry sculptures that are a nod to the feathers and regalia worn during carnival. With room to sit inside, the sculptures rock back and forth and expand on Barnes’ ongoing interest in porch rocking chairs as ritualistic symbols of ponderance, gathering, conversation and more. “Roll” are hanging wind chimes that recall the brass drums that lead carnival processions. Barnes’ Rock|Roll collates at a party pavilion dome, reminiscent of a sliced disco ball, which invites communal gathering.

The Anava Projects curators continue, “Germane’s work shines a light on the ways in which objects and environments reflect, amplify or diminish the lived experiences of communities, especially BIPOC communities, who have historically been excluded from design processes and planning.”

During Art Week, the Design Miami/ fair features a fleet of Barnes’ brightly colored musical “Rock” sculptures inviting couples to sit and rock together, children to hug them and other imaginative interactions.

Barnes concludes, “Rock|Roll is a generator to celebrate a city that has allowed me to call it home for the past nine years in the most positive way possible.” 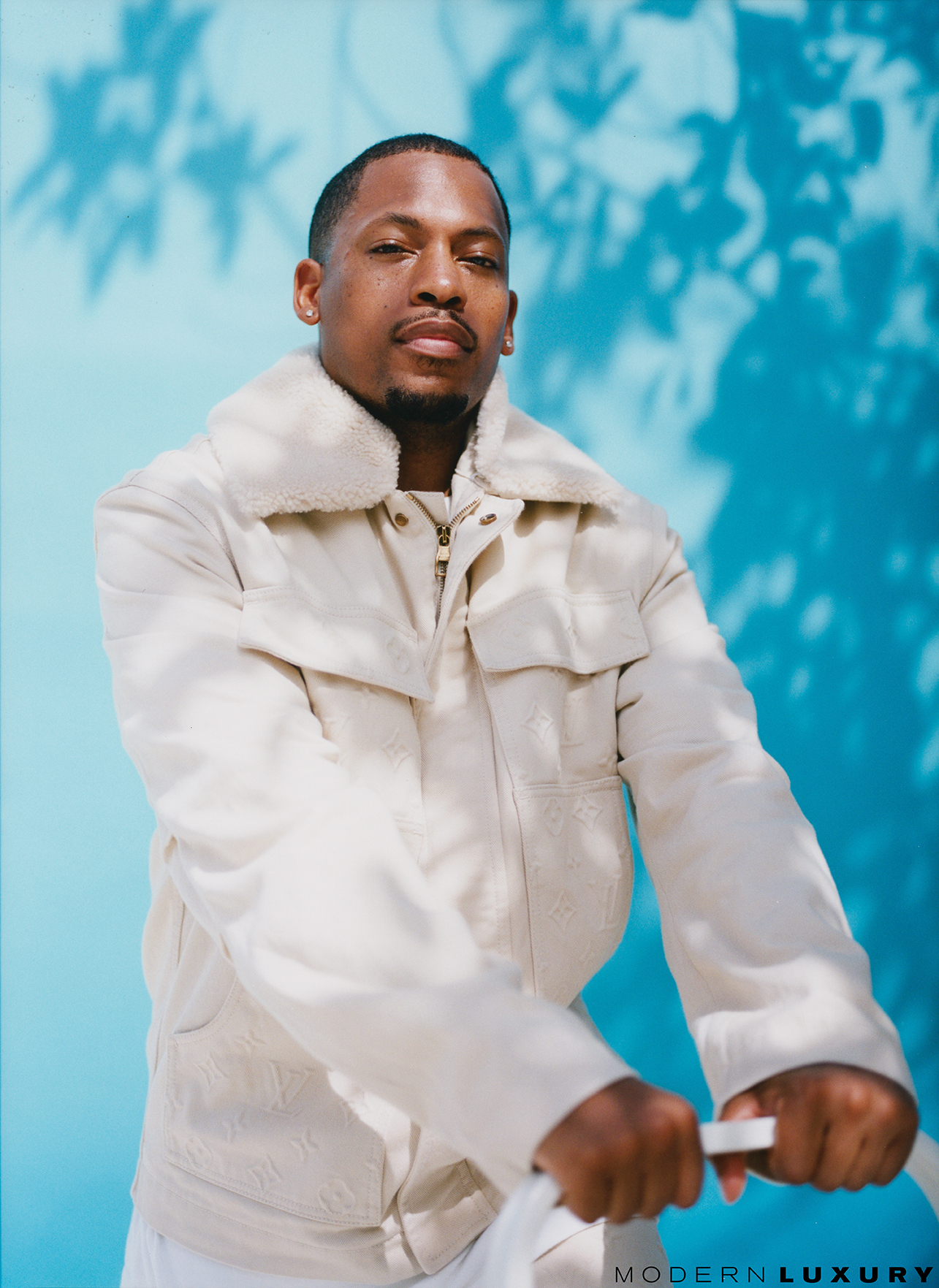 Germane Barnes is “rock” in his ardent commitment to the architectural field and to empowering historically excluded communities. He also embraces the opportunity to impact future generations of designers from all backgrounds through his teachings at University of Miami and by inviting his students to collaborate on Studio Barnes LLC projects.

He shares, “It is my goal that my studio assistants one day surpass me.”

Barnes is also “roll” in his ability to meld creative approaches to forefront aspects of our environment previously ignored, overlooked or not thought of. When prompted what he would like to see for Miami, Barnes shares a vision for better water infrastructure and flood mitigation, ecological education and smarter water-symbiotic use of materials. Barnes is two exams away from completing his architectural license.

Photography by: Photo By: Josh Aaronson