Hors d’oeuvres from The Bazaar

Hors d’oeuvres from The Bazaar 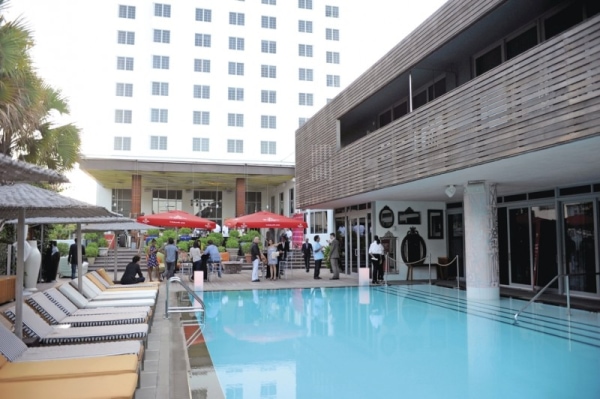 The pool by Hyde Beach at the SLS South Beach

The pool by Hyde Beach at the SLS South Beach

The Event
The genius! The legend! The enigma! Master chef Ferran Adrià has been called many things, and he proved to be all of them and more at the recent Creativity in the Art of Food, a culinary gathering presented by Estrella Damm at Hyde Beach, where he spoke to a crowd of guests about his experiences in creating the world-renowned elBulli restaurant, his philosophy on cuisine and future endeavors.

The Crowd
Most of Miami’s top toques left their grills to hear the master speak. Among those in attendance were José Andrés of The Bazaar, Aaron Brooks of Edge Steakhouse, Brad Kilgore of J&G Grill, Dena Marino of MC Kitchen, Sean Brasel of Meat Market, Sergio Sigala of Cecconi’s and Timon Balloo of Sugarcane Raw Bar Grill. “It was amazing,” said Todd Erickson of HaVen and Huahuas. “I skipped Flywheel for this, and it was totally worth it.”

The Highlights
After many sips of Estrella Damm beer, guests moved to a closed-off section of Hyde Beach for Adrià’s presentation, which included all sorts of visual aids and was heavy on anecdotes. As he teased the audience with questions about cuisine and ingredients, laughter and applause followed. Once the presentation ended, invitees moved to The Bazaar for a dinner featuring the restaurant’s specialties and to have copies of Adrià’s book, A Day at elBulli, signed by the man himself. -Photos by World Red Eye