Multihyphenate superstar Andra Day checks in as she caps off an amazing year–and an even brighter future ahead. 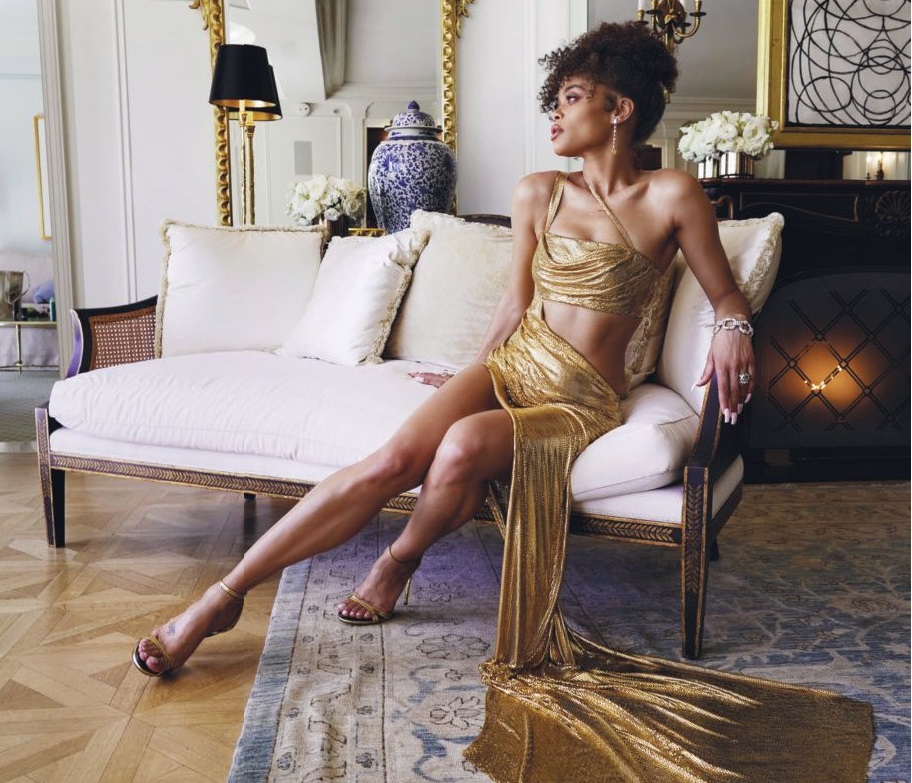 Her award nominations—three Grammys, one Emmy, one Academy Award and two Golden Globes—plus a Golden Globe win for Best Actress in a Motion Picture barely hint at Andra Day’s immense talent. For anyone who saw her spellbinding performance as Billie Holiday in The People vs. Billie Holiday, it is clear her star will continue to burn bright—and she is, in fact, the one to watch in both music and film. We checked with the luminary to get her thoughts on the transformative role and what the future holds next. 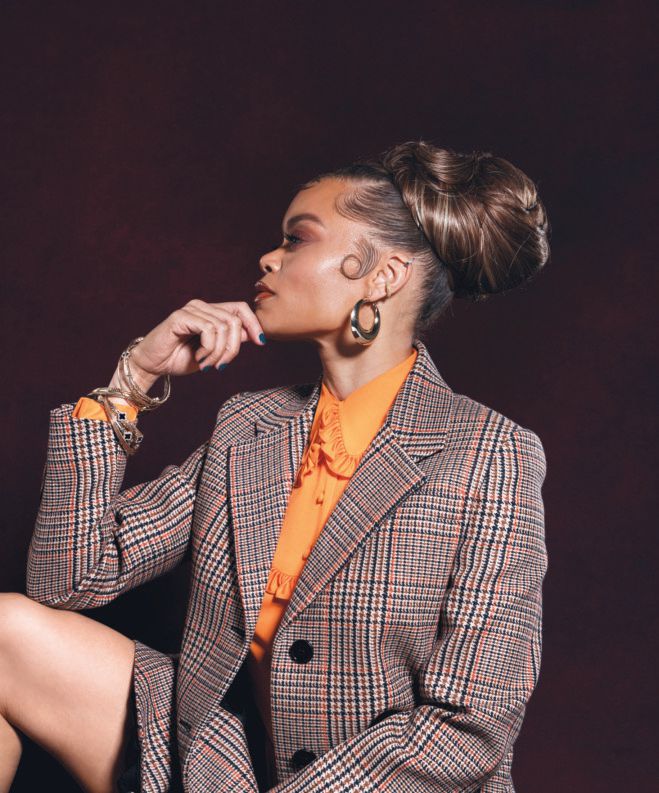 When did you first discover your love of music as a child? Did you always love music?

I always find it hard to answer that question because my parents made it so much a part of our upbringing. So I feel like my earliest memories are earlier than I can remember. They are tied to music, but I remember two kinds of revelation. I guess it was Whitney’s voice. When I was 6 years old discovering that, maybe, I could sing. Then it was also the introduction to Billie Holiday’s jazz music. When I was young, I’d go with my father to [listen to] Stevie [Wonder].

I read that you were discovered by Stevie Wonder. Tell us what it was like to get that phone call.

It felt like a meteor kind of hit my house because I was living in a small studiolike apartment with my mom just behind 7-Eleven. One of the biggest voices on the planet [was on the phone]. Life is so crazy. I’m really still very much grateful for him and his wife. He and his wife introduced me to the producer who did my first album, so I definitely owe them a debt of gratitude. Not just for his music, but his actual hand in my career.

This has been such an unbelievable year in time for you, especially when you took on the Billie Holiday project. Did you anticipate that you would win a Golden Globe? Did you have hesitations about taking the role at first?

I definitely didn’t anticipate winning a Golden Globe. I think I was just so terrified. When they first brought it up to me... I wanted [the story] to be told, but I didn’t think I was the person to do it. I thought I was going to mess it up and be terrible. I definitely actively shunned the role. But I had a peace about moving forward and doing it. For me, it was about honoring Billie’s legacy, and being a support and a sister and a comrade to everyone I am working with on set. I was not anticipating any of this. It is a blessing.

Your stage name honors the legacy of Lady Day. Have you always had an emotional connection to her?

Yes, I think so, because of what you sacrifice ... just the fact that she is a Black woman in this nation trying to live freely. It was just something about her birth. When I was first introduced to her she had such a different tone in a different texture. I was really enthralled with her voice and I just thought, ‘Wow.’ She owned it; she owned her voice; she owned her musical identity. And she fought for that. It really helped me to have my own voice when I was introduced to her, and even if it’s just fun and light, to say something that matters.

How did the role transform you as a person? What did you walk away with?

I think prior to the role, I was just able to say ‘yes’ in the most uncomfortable situations. I feel like this role really chose me even more than the other direction. It definitely made me braver and more authentic as far as the things that I experience, how I experience them and what I go through. Just to be honest with myself.

You underwent such a physical transformation for the role. What motivated you to go through such dramatic change, and how did you do it?

For me, it is about not doing things horizontally, not for competition. It’s a higher standard. It’s about having to examine yourself. For me, it is about wanting to represent that spirit when I was in the space—and also just wanting to honor her and do justice to her legacy. I feel like to play Billie Holiday’s life as comfortably and easy as possible is just not doing justice to her legacy, because the joy that she emitted into everything is what made her so magnetic. I also wanted to be present and be there for my cast and everyone supporting me. It was a lot. It took a toll on my body physically and emotionally. It took a toll on my voice. It took a toll on my body, losing all that weight, and smoking cigarettes and drinking—and changing my persona. But it was a blessing ultimately. I hope and pray that she is happy.

Were there any ways in which the role was healing?

Absolutely. Like I said, it is like peeling back the layers of the onion. I really get to the root of the core through practice. I just want people to know it is really healthy to uncover our deepest intentions, our deepest functions and be real and honest about those things. That’s what [Billie] did, and that’s what acting I think did for me. The display that we deal with as Black women, we must face that and be reminded to continue to fight like she did. It reminded me that I always hear about PTSD. Black people and children are born with PTSD in their DNA now because of generations of trauma. The other thing she reminded me of was the passion we are also born with. The triumphs in strength and in victory. We need to keep fighting, keep loving, celebrating, laughing— and even in the midst of life stand up for ourselves. It’s definitely healing and inspiring.

With ‘Rise Up’ being called the unofficial anthem of the Black Lives Matter movement, what message do you hope people take away from that song? I want them to take a message, of course, about fighting through— obviously the song is called ‘Rise Up’—but the other part of the wage is for people to take away from it that you’re not alone. For me spiritually, even if you feel alone or seem alone, you’re not alone. I can’t speak for other people, but it is also a reminder that we don’t just have to stand up and just survive—but thrive, push through and persevere. We don’t have to do it alone—and we shouldn’t require other people to do it alone. I think we have this idea of wanting to build independence constantly, which is great in some ways. The truth of the matter is that we are all connected to the same material, right? The same subatomic waves really course through— the same sound waves and right vibration. I think we understand that we are all actually connected. There’s a healthy interdependency that is a part of who we are to meet each other and be there for each other—and we don’t have to go through these things alone.

Tell us a little bit about your new music. What inspired the song and video for ‘Phone Dies’?

It’s a picture of a Black woman—a woman of color living in America—perceiving the world… Still discovering myself, even at 36. I think we’re constantly doing that. I think it’s a question of what my role as a woman actually is as far as the community goes and romantically, just sort of everything. It’s hard to pinpoint, and it just was who I am. This is just everything about who I am and what I was doing. 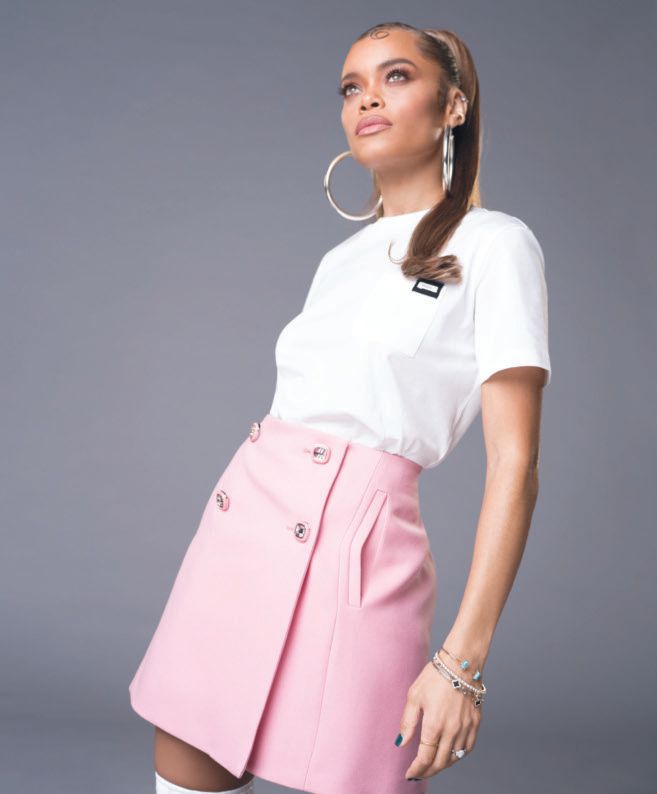