Olympic gold medalist and Hall of Famer Lindsey Vonn is one of the most decorated female athletes of our time. In her next life chapter, she's racing toward a new challenge. 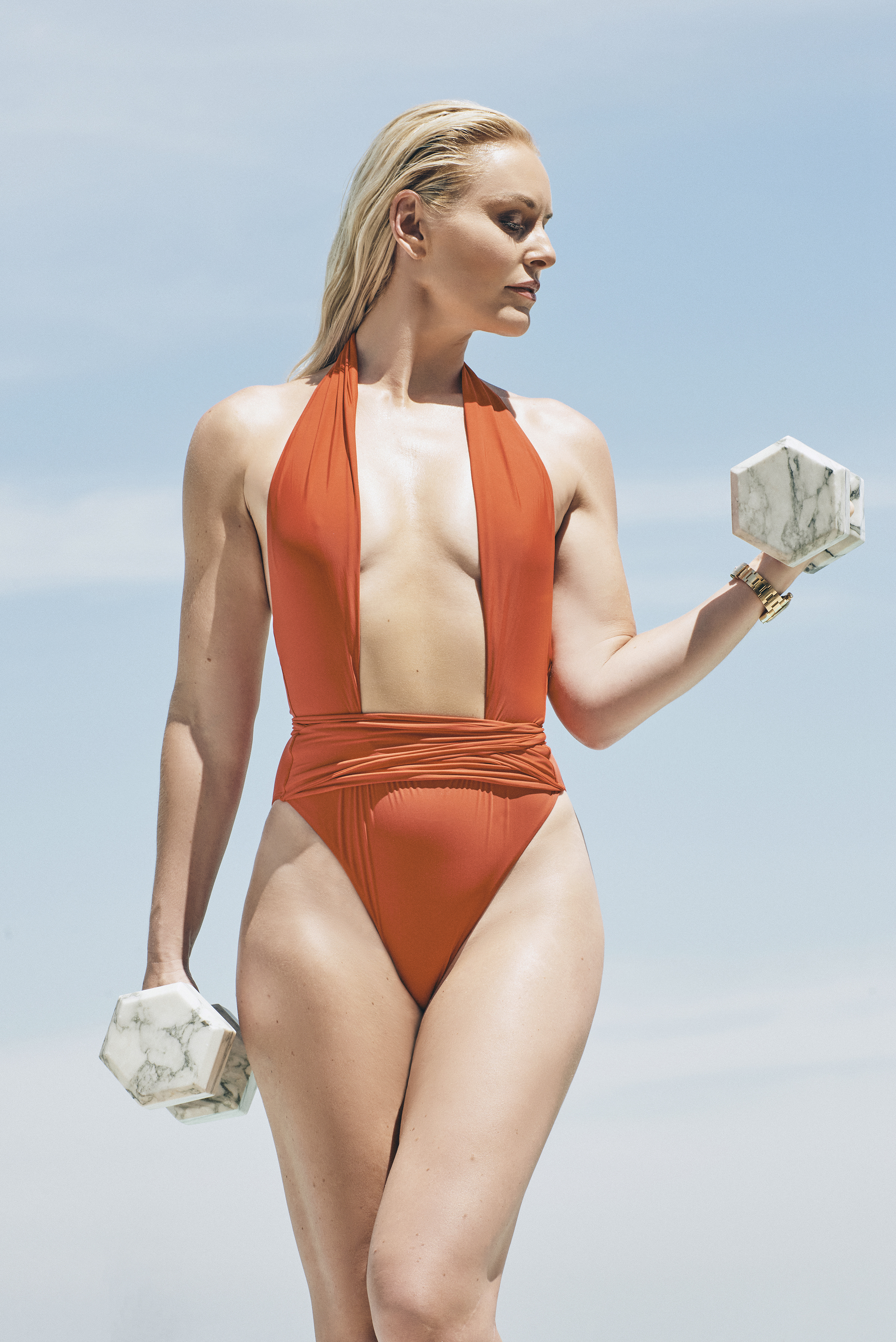 Lindsey Vonn was clipped into skis as early as she could walk. By age 7 she was racing competitively, and soon after, she burst onto the international ski scene, where she quickly captivated the world with her tenacity and prodigious talent. Her accolades are no short list, and after decades of domination, the name Lindsey Vonn will forever be synonymous with the Alpine sport.

And while she is one of the greatest to ever glide down a piste (her recent Hall of Fame induction says so), her legacy will certainly extend far beyond the slopes.

“I think the Lindsey you’re talking to today is more of a businesswoman,” Vonn shared with me, phoning in from Utah. “I’m still all about challenging myself, but just in different ways now than I used to when I was a professional ski racer. I’m an entrepreneur, I’m in venture capital—I wear many hats, but I love the chaos. I love pushing myself.”

Vonn’s trophy cabinet was brimming from the onset. She’s won four World Cup overall championships—one of only two female skiers to do so with three consecutive titles in 2008, 2009 and 2010, plus another in 2012. Vonn was the first American woman to earn a gold medal in the downhill discipline at the 2010 Winter Olympics and went on to win a record eight World Cup season titles (2008-2013, 2015, 2016); five titles in super-G (2009-2012, 2015); and three consecutive titles in the combined (2010- 2012). In 2016, she clinched her 20th World Cup crystal globe title, totaling 82 World Cup victories over the course of her career—a women’s record. You might say Lindsey Vonn is something superhuman. 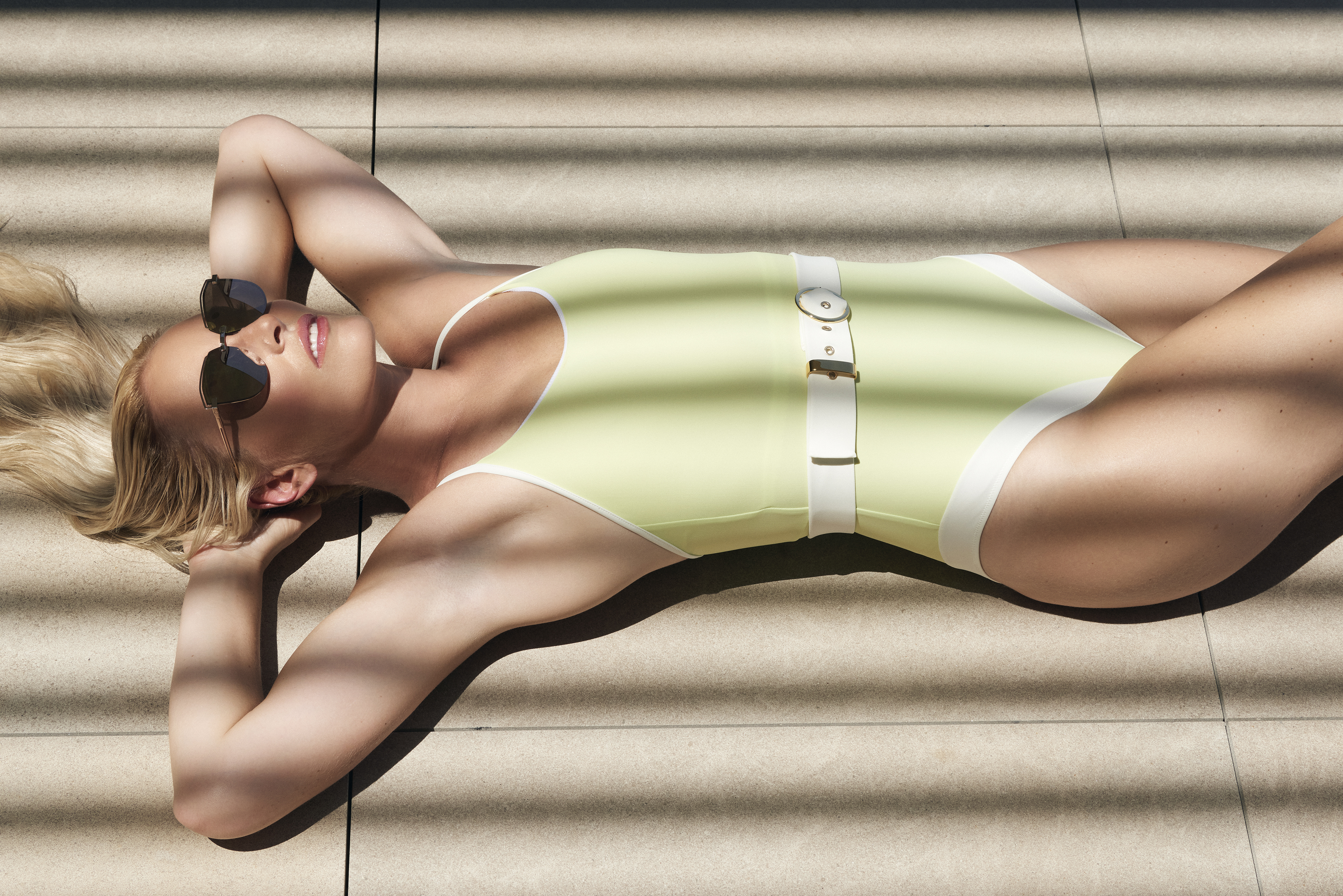 On that notion, you wonder how one could possibly go from a whirlwind of that nature to the next chapter. After all, how do you tell the world’s greatest skier to slow down? For Vonn, the chasm between full-time athlete to businesswoman was always anticipated but not easy to navigate—at least not that soon.

“I had an idea of what I would like to do when I retire, and my dad has always made me aware that athletes’ career spans are usually pretty short, so I was prepared,” she says. “I still wish I would’ve been able to ski longer, since I only ended my career because of a large accumulation of injuries. I had everything set up with business and I was busy, I had things to do, and I was working a lot, but it just was a pretty big difference going from your life revolving around your skiing career, and then all of a sudden it’s completely gone.” 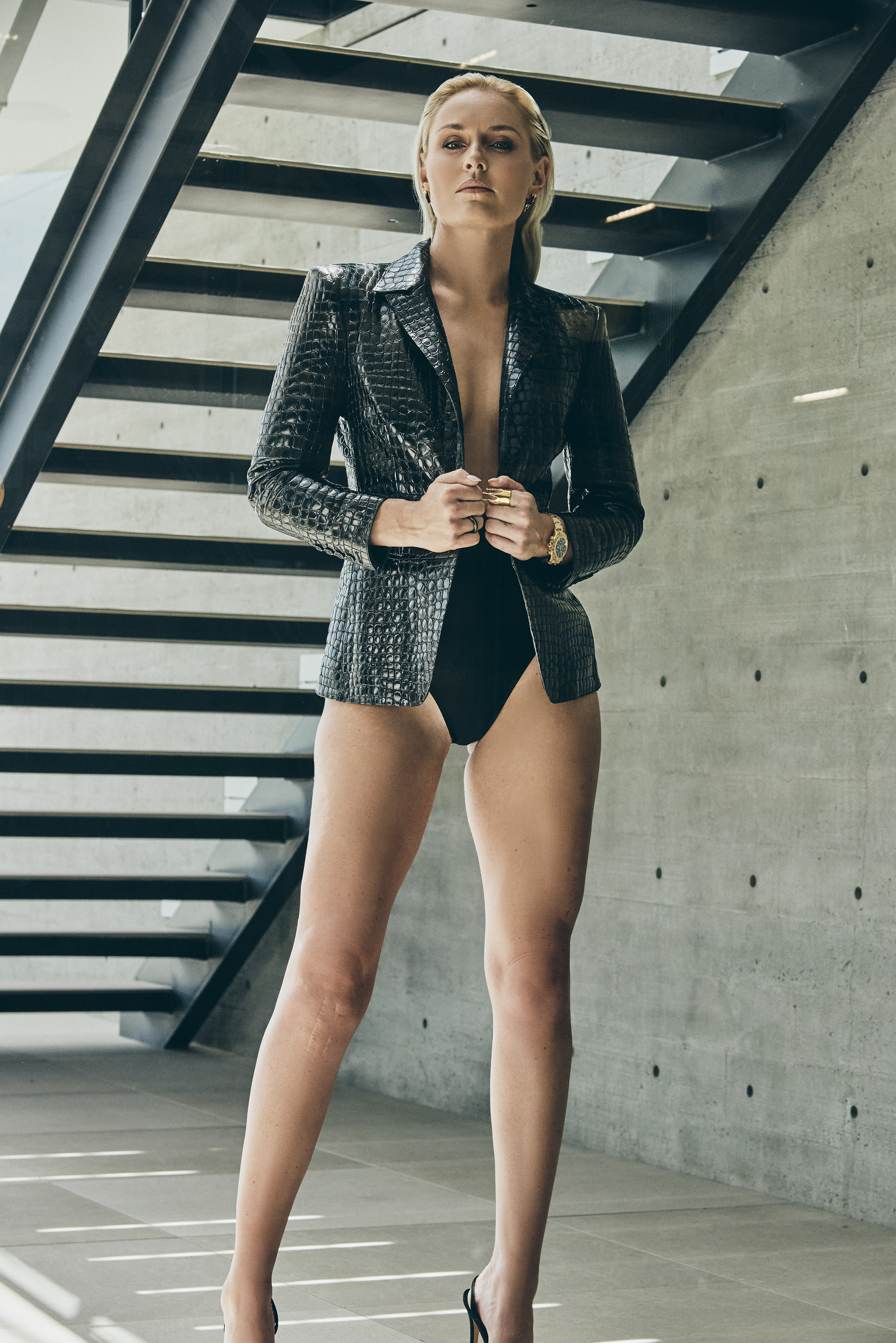 Vonn recalls suffering from depression for a year and a half while she got her bearings and found her center. After enduring a rotary cannon of injuries from a fractured humerus bone to a ligament tear in her knee with a load of competition damage in between, Vonn was battered both mentally and physically. Ensuring that she conclude her career on a high note is what helped her focus and push through to find that new version of herself, but for a while, she couldn’t even bring herself to get back on skis.

She was the athlete who left it all on the battlefield, defying the odds and pushing past life-threatening injuries, etching new milestones into history. And in a sport that’s defined by a hundredth of a second—literally the blink of an eye—you can understand how meticulous and systematic someone like Vonn might be about all of life’s decisions. 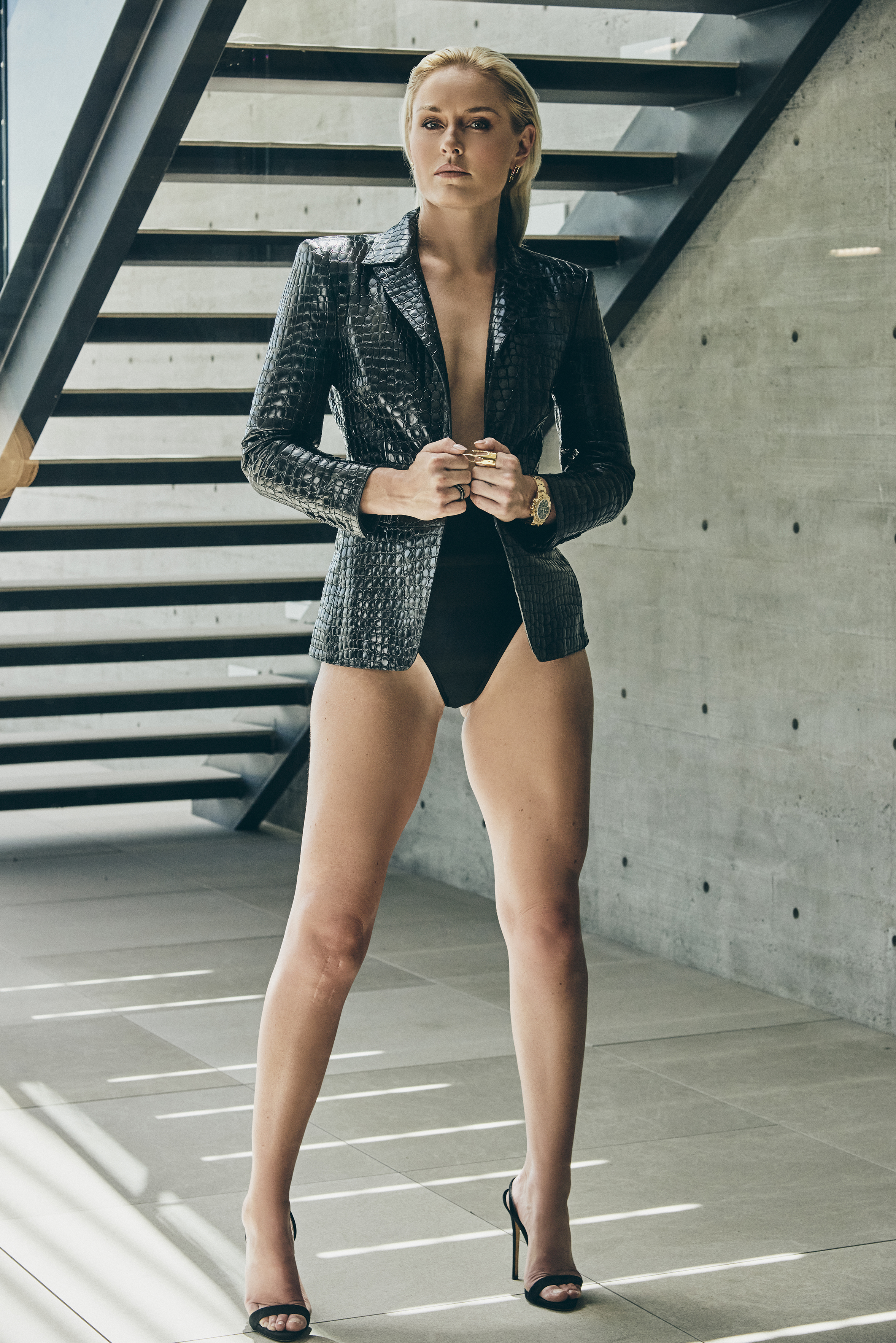 “There have been times after a race I thought if I’d braided my hair differently, I could’ve been more aerodynamic,” Vonn notes, offering an example of one of the many little things you think about when you check your final time. But she pivots and explains that in the end, these have all been character-building moments. “I don’t regret anything,” Vonn says with full confidence. “I have zero regrets in my life because I’ve always made the best decisions I could with the information that I had at the time. Those mistakes teach you something. And as long as you try not to repeat the same mistakes, I think it’s always worth it in the end. No one wants a perfect life— that’s boring.”

In case Vonn’s illustrious career wasn’t convincing enough, she was recently inducted into the United States Olympic Hall of Fame alongside greats like Michael Phelps, Mia Hamm and Billie Jean King. It came at quite the opportune time now that Vonn has found peace and joy in her retirement, and has even been back on the mountain despite thinking she had sworn off the sport for good.

“When you retire, you look back at your career a little bit more fondly than you would when you’re in your career, and I think it was a really reflective moment for me,” Vonn shares, recalling the experience. “It made me really proud of what I’ve achieved, and it was something that was really important for my legacy. Hopefully one day I can take my kids to the Olympic museum and say, ‘Mom’s in the Hall of Fame!’ or something like that.”

Now, with the ultimate feather in her cap, she’s been fully immersed in a multitude of projects that she’s quite proud of. The Lindsey who sits in front of us today was able to translate her athletic rigor and winning attitude into a business-focused mindset. She notes that, in a way, it was completely natural. “The chaos from skiing is now chaos in business,” she says. “That’s kind of how I thrive as a person.” 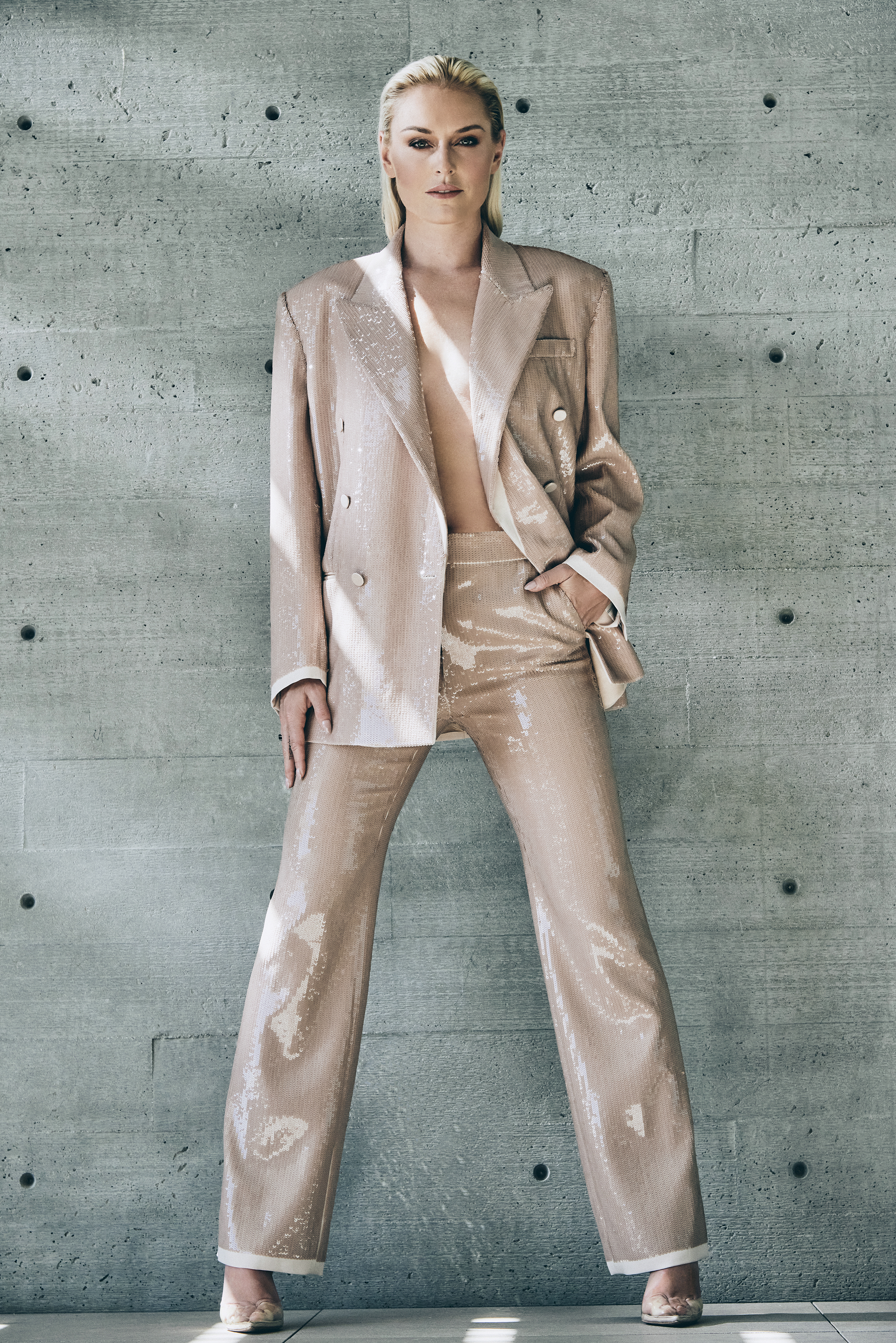 Vonn has founded Après Productions with her friend Claire Brown, designed a ski collection for Head, her own line of goggles with Swedish brand YNIQ, and penned a memoir, Rise: My Story. She’s been an Under Armour spokesperson longer than any other professional athlete and maintains current ambassadorships with Red Bull, Oura, Land Rover, Hyperice, and Idorsia Pharmaceutical’s Quviviq. Above all, she’s most dedicated to her namesake charity that she founded in 2015. Its mission is to serve underprivileged girls through scholarships and programs—an endeavor inspired by her childhood idol and mentor, Picabo Street. From “strong girl camps” to basic life courses, Vonn is hoping to help as many young women accomplish their dreams both in academia and sport as possible.

As part of the evolution to the new Lindsey, the former athlete has scooped up new digs in Miami. In her house search, the most vital criterion was ensuring her home was right on the water. She’s always loved diving, spearfishing and scuba diving, so she wanted a place either on a canal or with access to a boat. It’s hard to picture Vonn in any environment except frigid temperatures atop a snowy peak, but she affirms that where she’s truly happy is being on the water.

I ask what prompted the move from snow to sun, and she responds in jest, “I actually hate being cold.” I can’t help but laugh at the words I thought I’d never hear from the world-class skier who hails from Minnesota, a state known for its brutal winters. Turns out, her loathing of cold weather is what led Vonn to make her own ski line (for her own utility more than anything else), proving she’s always had an entrepreneurial spirit.

And when she’s not on the water, you’ll find her playing tennis—the sport she’d choose as a second to skiing if she had to. Vonn’s dream hitting partner? “I mean, Roger Federer, obviously,” she quips.

So Lindsey Vonn is starting to write a new chapter in her legacy—a life beyond the slopes, trading skis for a combination of bikinis and edgy business suits. “Eventually I want to be known as an amazing businesswoman and have people not even know that I was a skier,” she says. “I want to leave a positive impact and be remembered as someone that has done good for others.”

FAVORITE PLACE TO RELAX: MY BACKYARD

FAVORITE PLACE TO GO OUT: LIV

Photography by: Photo By: Mark Squires