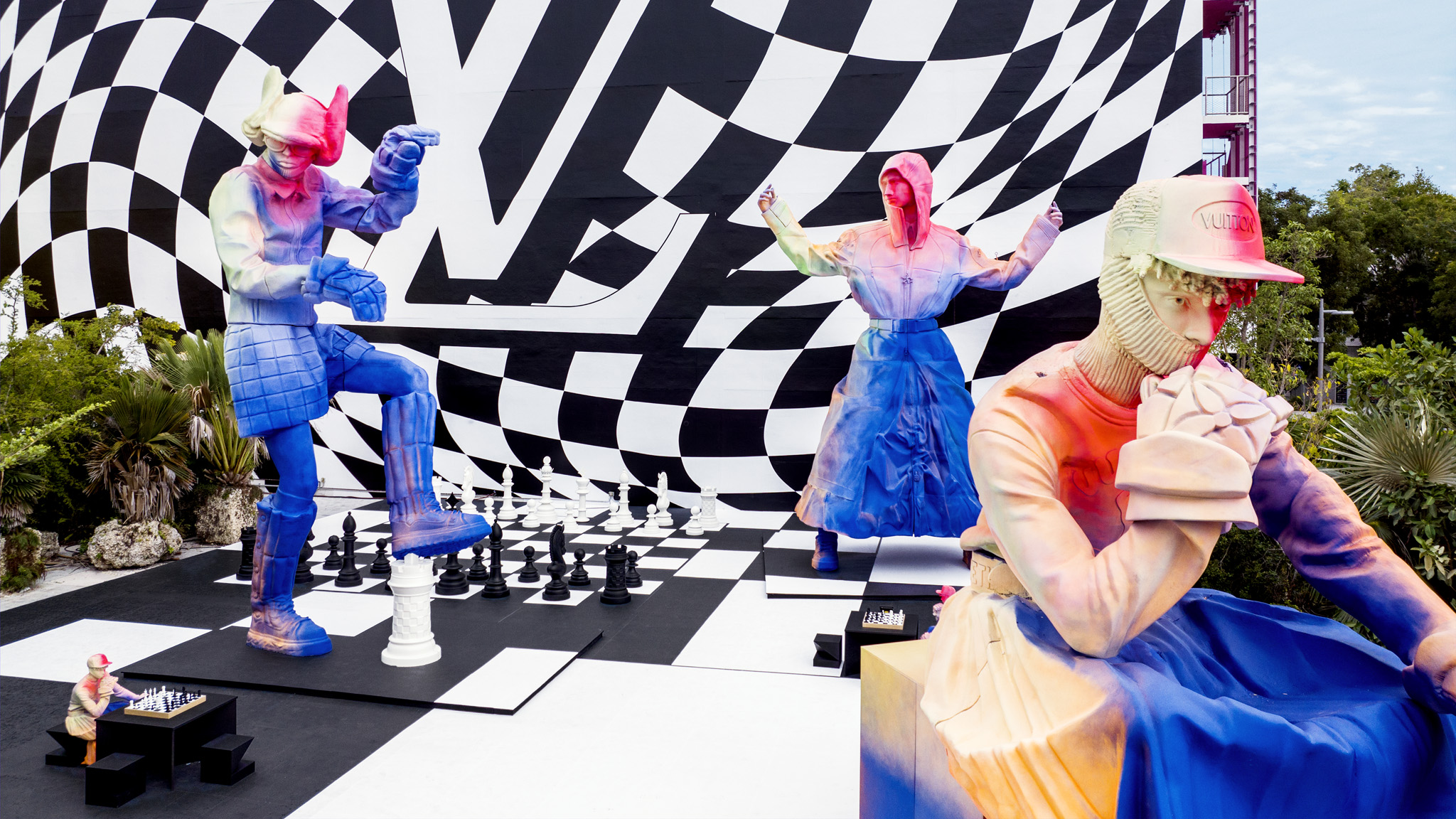 The Miami Design District is now home to a freestanding Louis Vuitton men’s store—only the second of its kind to exist globally, and the very first in the United States for the French fashion maison.

With a strategic opening timed at the start of the most recent Art Basel Miami Beach, what was meant to be a jubilant kickoff to a week of revelry turned into a solemn global tribute for the brand’s late artistic director, Virgil Abloh, who passed away suddenly just days before Louis Vuitton’s highly anticipated runway show and grand opening. Since the new store opened its doors, thousands have flocked to shop, as well as celebrate the life and legacy of Abloh within the walls of his latest contribution to the creative world. 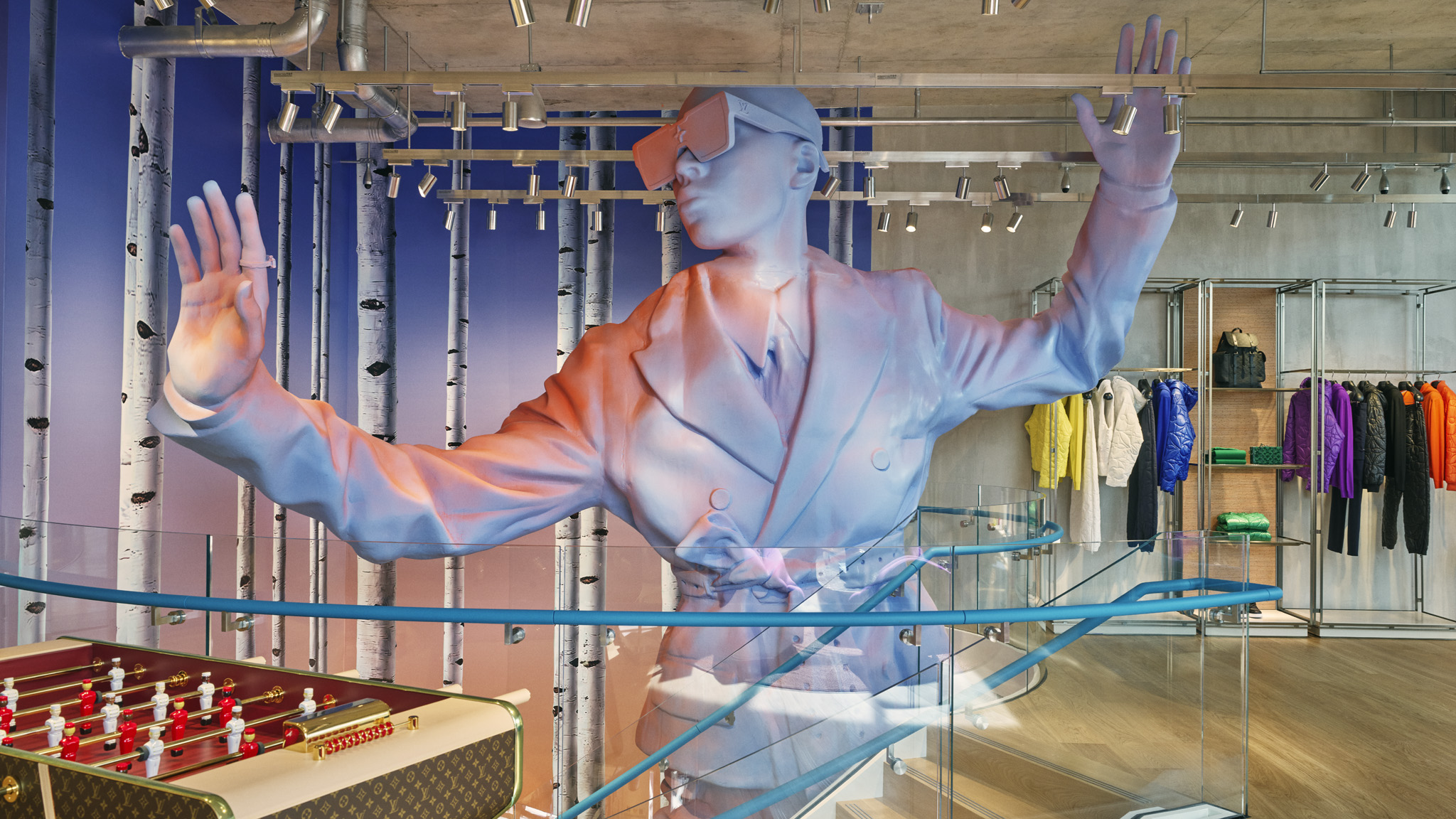 Virgil Abloh was deeply involved in the design of this impressive, two-story concept and its striking all-white facade. The building’s intricate geometric latticework is inspired by a classic Louis Vuitton Objets Nomades piece dubbed the Diamond Screen by Marcel Wanders. Here, the artist offers a genius reinterpretation of Louis Vuitton’s historic Monogram motif and the canework that once adorned LV trunks. 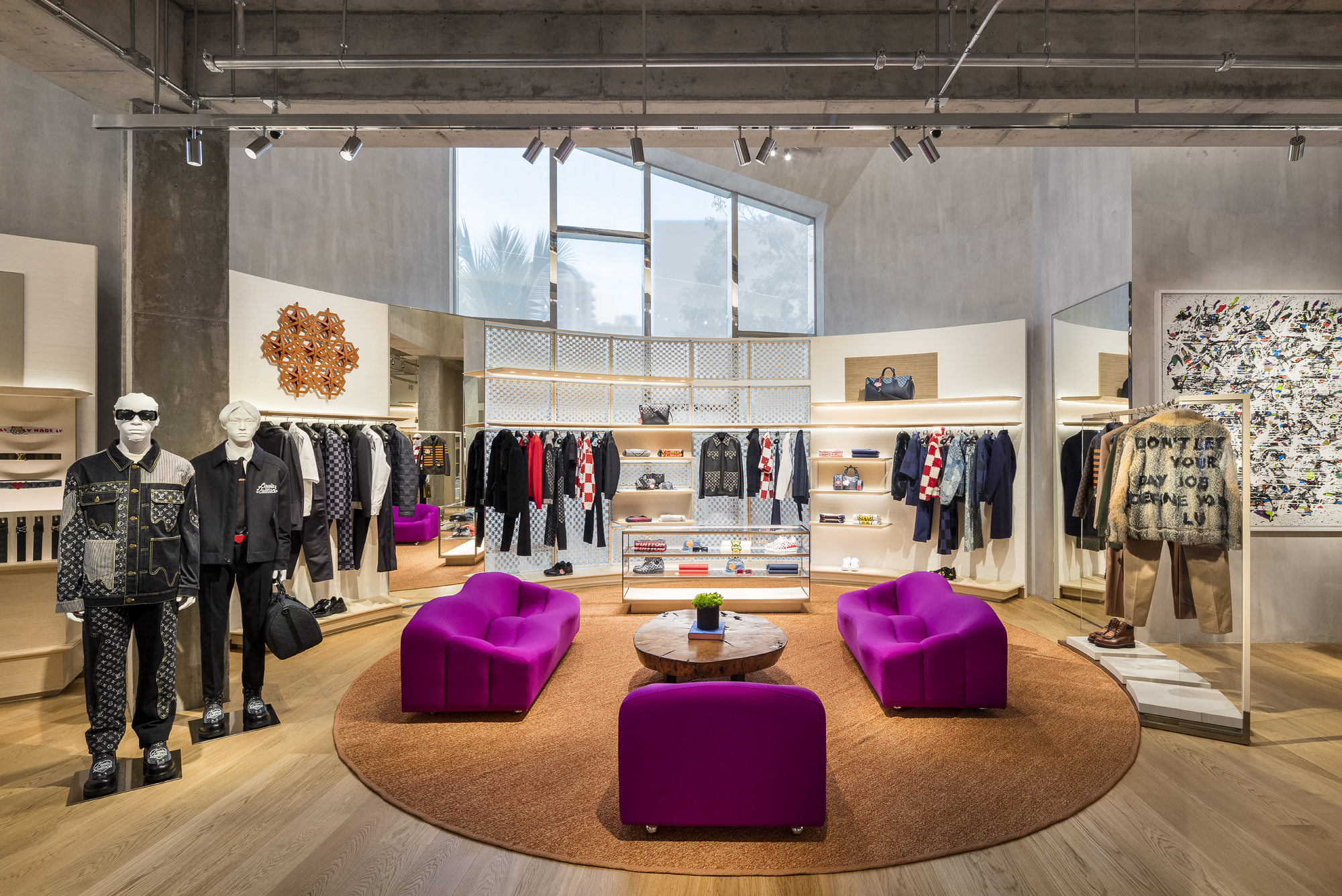 Stepping inside, the 3,586-square-foot space is anchored by a chandelier inspired by the Spiral lamp, an Objet Nomade by Swiss design studio Atelier Oï. The interior boasts industrial touches with exposed concrete that vault cathedral-style rooms, adorned with millwork and custom furniture. A twisting staircase connects the first and second levels, ensconcing a 27- foot sculpture of the model Kai, and is bedecked in blue leather handrails that pay homage to Miami’s azure waterfronts. 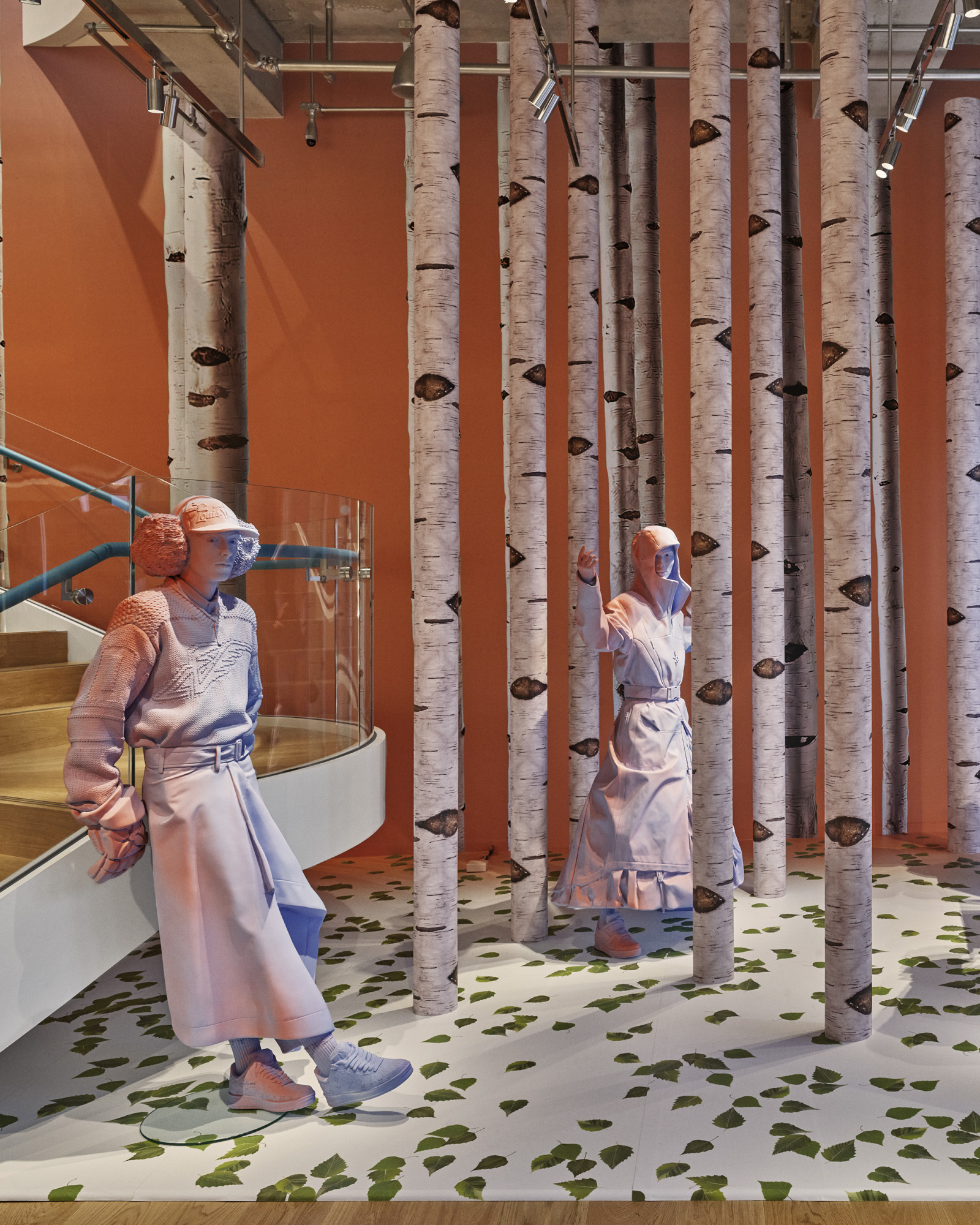 Honoring its Design District location, the store features temporary spaces, characteristic statues tied to the collection’s chess theme and a number of works by local artists, including a wall-covering by Michelle Weinberg installed in the fitting rooms and elevator artwork hand-painted by Captain Casual. Topping off the store is a charming roof terrace with views over Miami and furniture supplied by Paola Lenti. 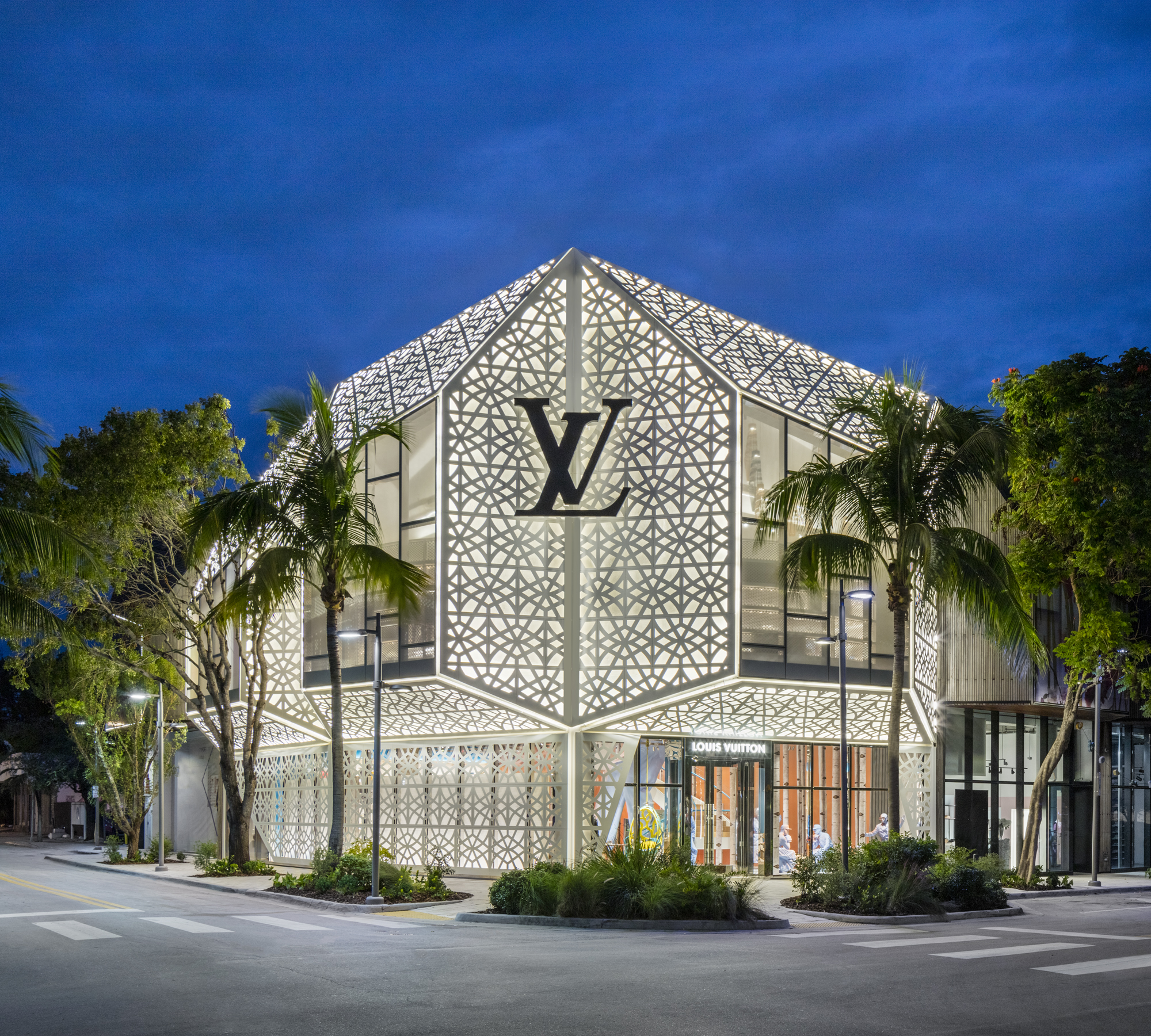 In addition to key pieces from Abloh’s spring/summer 2022 collection and timeless leather goods, store exclusives are available to shop including a chain-link necklace in a colorway inspired by the city, a skateboard with a graffiti logo motif and a prelaunch of the Tatic sneaker in the Vert colorway. For added bespoke touches, clients can personalize leather goods using an on-site hot-stamping service, with engraving available for fragrance as well. 3900 NE First Ave., Miami, louisvuitton.com