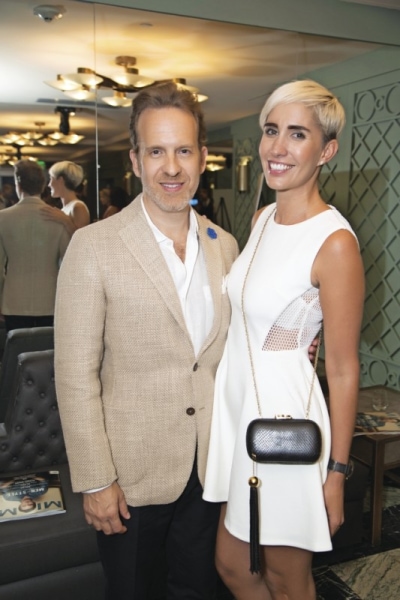 The Parties
Certain occasions call for a double when it comes to celebrating. Such was the case of Miami magazine’s Men of Style Issue, our annual homage to the city’s dapper set, which was feted at two very different gatherings. First up was an intimate cocktail party at The Man’s Store at Neiman Marcus in Bal Harbour Shops, where the April 2014 volume was first revealed to readers, clients and friends of the magazine. The second gathering was the publication’s annual MOS soiree, at which more than 200 guests celebrated the dandy ways of the Magic City 50 floors above Brickell Avenue at FIFTY at the Viceroy hotel.

The Crowd
The April 2014 edition was well represented at both soirees. At the Neiman Marcus evening, a host committee made up of interior designer Juan Carlos Arcila-Duque, Douglas Elliman executive Horacio LeDon and Miami City Ballet dancer Chase Swatosh (all of whom had profiles in the issue) mingled with invitees over cocktails against a backdrop of male models wearing NM’s most popular spring 2014 collections and posing atop pedestals throughout the third floor shop. Days later at FIFTY, most of the subjects selected for the magazine’s signature “Men of Style” feature—including attorney Daniel Novela, marketing director Ray De Leon, interior designer Hernan Arriaga, Dr. Jesse Sandhu, musician David Aaron and model Berthil Espegren—proved to be ideal hosts as guests enjoyed cocktails and hors d’oeuvres. The ubiquitous topic of conversation? The million-dollar views of the city from the Viceroy hotel’s top floor. “That ride up was something else,” said publicist Lauren Gnazzo as she exited the elevator. “Look at that view! Why don’t we come here more often?”

The Highlights
While the appeal of the Neiman Marcus gathering was more about chatting and catching up, the agenda at FIFTY was all about activation overdrive. As waiters circled the room with hors d’oeuvres from 15th and Vine Kitchen, guests made their way to the bar to sample the signature cocktails created for the evening. Others couldn’t help but be drawn to the Kirk Jewelers pop-up shop and its Tudor timepieces. Outside at the lounge’s expansive pool terrace, the city vistas only got more intense, as did the creature comforts for guests with rum tastings, energetic sets by Miami Soundwave DJs, rolling cigar stations and complimentary shoe shines by The Buffettes. And, without fail, the question of the evening popped its head just as the party was hitting its stride: “Why doesn’t the magazine do this more often?” inquired realtor Matt Dugow. “Once a year just isn’t enough!” –Photography by Brett Hufziger