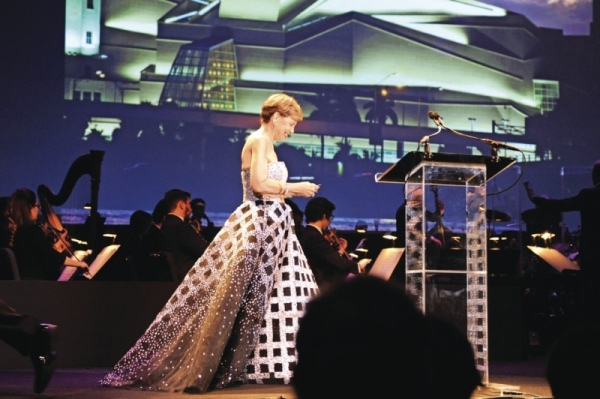 Adrienne Arsht steps up to the podium.

Adrienne Arsht steps up to the podium.

The legendary Vegas entertainer lends his star luster to the Adrienne Arsht Center for the Performing Arts’ annual gala.

THE PARTY
The Adrienne Arsht Center for the Performing Arts has seen major talent hit its stages, but the excitement over the headliner at recent annual gala (one short of its 10th anniversary) made the soiree one of the hottest tickets in town. On the marquee? The one and only Barry Manilow.

THE CROWD
Gala chairs Swanee and Paul DiMare were joined by the institution’s name benefactor, Adrienne Arsht herself, in welcoming dozens of Miami’s leading philanthropists, politicos and VIPs who flew in for the event. Among those in attendance were Miami Mayor Tomas Regalado, Miami City Ballet Artistic Director Lourdes Lopez, singer Monica Mancini and Ambassador Steven Green.

THE HIGHLIGHTS
All senses were on high alert as soon as guests saw the Lynn Wolfson Stage of the Ziff Ballet Opera House transformed into a supper club with a 20-foot crystal chandelier floating above guests. But all the design razzle-dazzle took a backseat when Manilow took the stage to deliver a performance of Frank Sinatra’s classic songs. There were delight-filled swoons during “Strangers in the Night” and “My Kind of Town,” which soon turned to hollering and dancing once Manilow switched to his own songbook—and “Copacabana” nearly brought the house down. -Photos by Justin Namon & World Red Eye