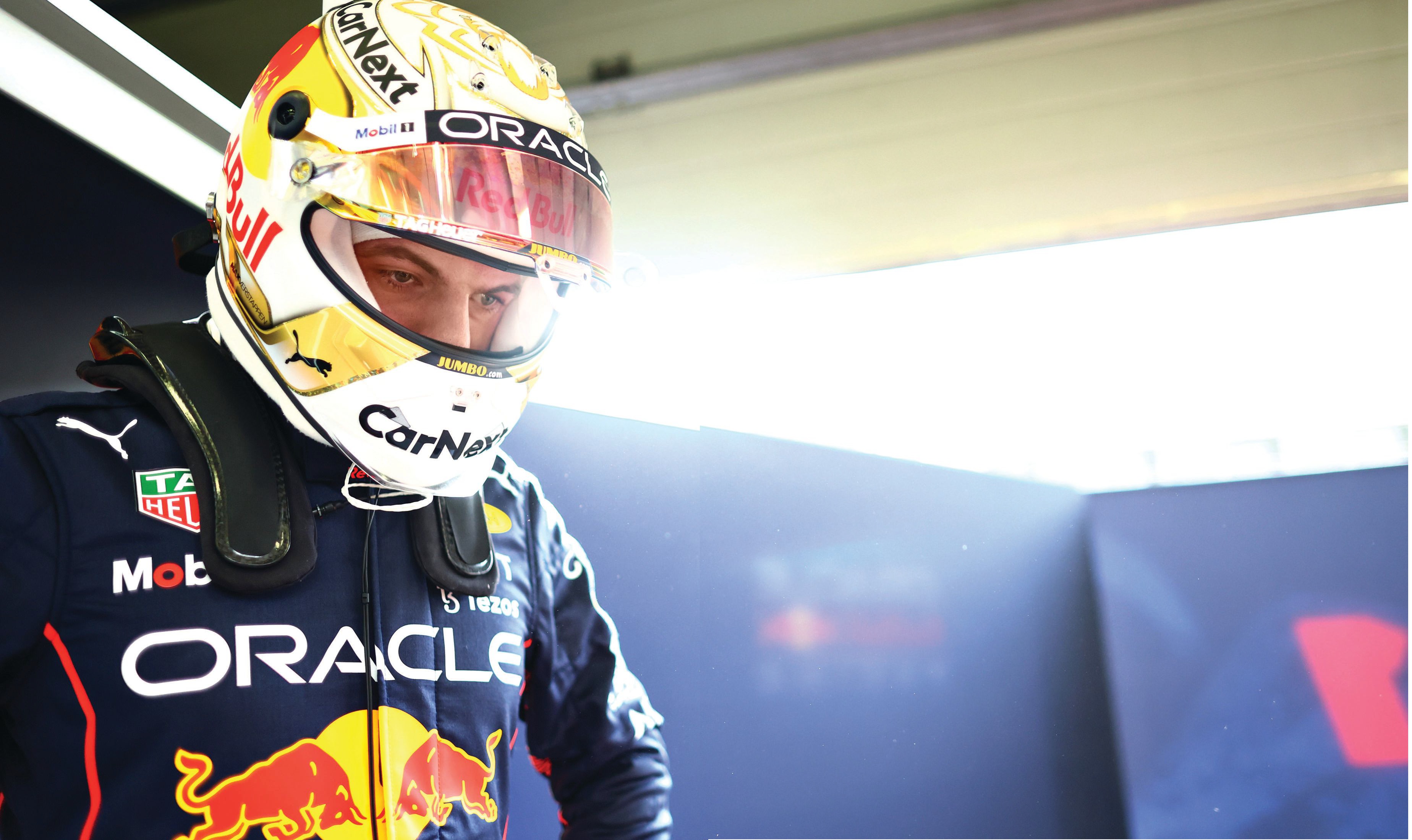 Max Verstappen comes off a 2021 F1 World Championship win and returns this season to defend his title. PHOTO COURTESY OF RED BULL RACING

IN 2021, the Formula One championship battle had never been so competitive. On one side, you had seven-year reigning champion Lewis Hamilton, with Mercedes-AMG Petronas. On the other, there was Belgian-Dutch prodigy Max Verstappen (@maxverstappen1) with Red Bull Racing Honda. Through each race, the teams went head-to-head, each facing respective uphill battles. However, Verstappen continued to show consistency, skill and extreme focus and determination at each stop of the season. Some of the highlights included the Mexico City Grand Prix, U.S. and Monaco prior to the Abu Dhabi Championship—where, keeping up with the season, the battle came down to the wire—as Verstappen conquered the final winning lap and brought home the first Red Bull Racing drivers’ world championship title in eight years. 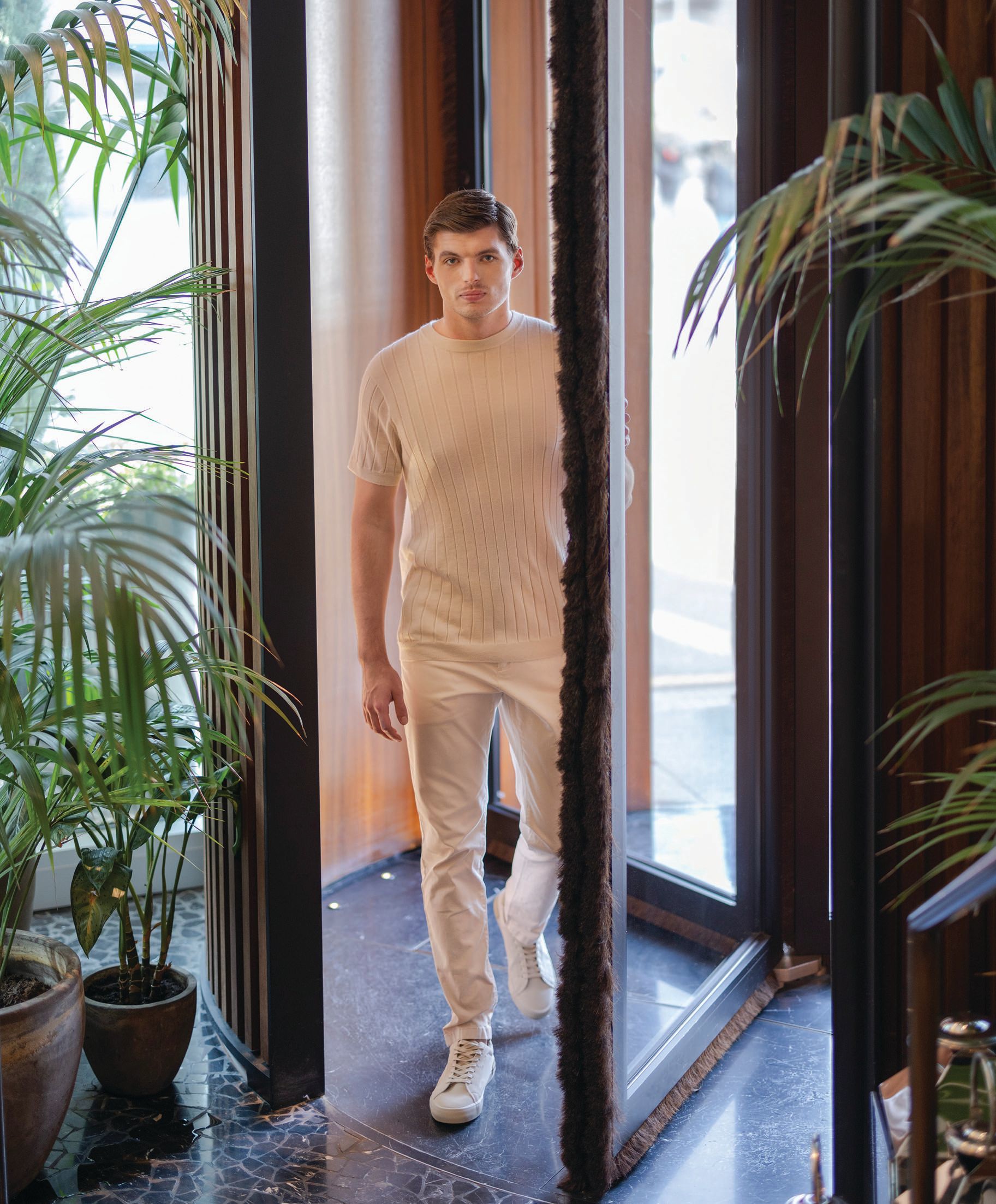 Verstappen boasts a diligent work ethic, staying focused on winning for his team. When he’s not training or competing, he enjoys traveling and spending time with his friends and family. PHOTO BY NAIM CHIDIAC

As I chat with Verstappen as he prepares for the upcoming season, he’s located in Barcelona training daily, fully focused and eager to return to the track. This year (to our great excitement), Miami will host its first-ever Grand Prix at Hard Rock Stadium. Poised to be one of the most anticipated races of the year, complete with Miami-style stadium amenities—like a man-made beach club, viewing gondolas and five-star hospitality components—the battle will commence on May 6.

As a fellow visitor of the city, Verstappen is pleased with the news that this new stop will be added to the tour.

“I really enjoy being in Miami, so I’m happy to be returning for the Grand Prix,” he shares. “I was there over my break this winter. It was cool to see how the track was coming along and hearing what it will come to be. I also heard the demand is super high, so I’m sure the stadium will be very full, which always makes for an entertaining race.” 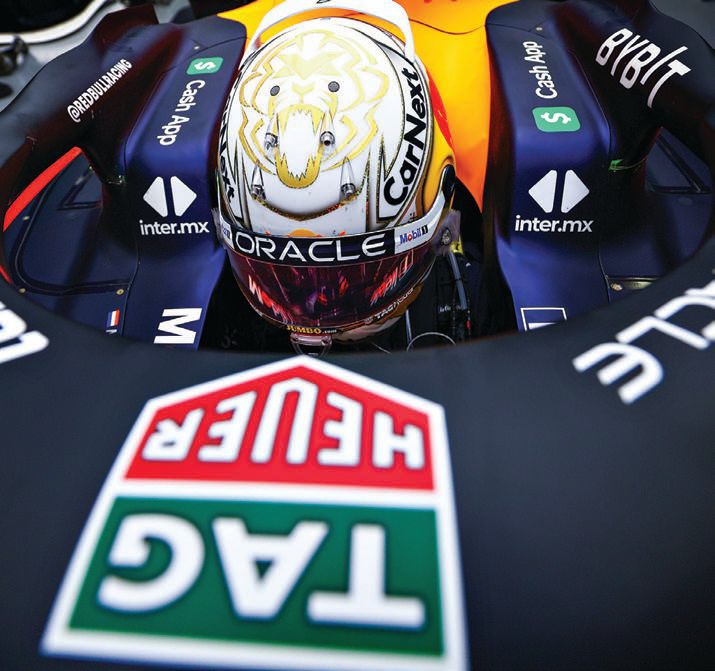 So full in fact that tickets to the race sold out almost immediately upon release over a year ago. Now, if you’re one of the lucky ones who can snag the coveted ticket, expect to pay a hefty premium—indicative of how impactful this moment will truly be for the city.

“The photos of the track look great, but what’s most important will be trying it out on the simulation,” he notes.

Entering the new season with a new car comes with its share of challenges. In the first race, the team dealt with some engine difficulties. Of course, for Verstappen and the Red Bull Racing team, this comes with the added pressure of defending the world champion title.

“I’m excited to get back on the track. With the new car regulations each year, it’s always completely different. But once you come back and sit in the car, you get that same feeling of excitement, as if nothing else matters. There’s nothing quite like racing.” 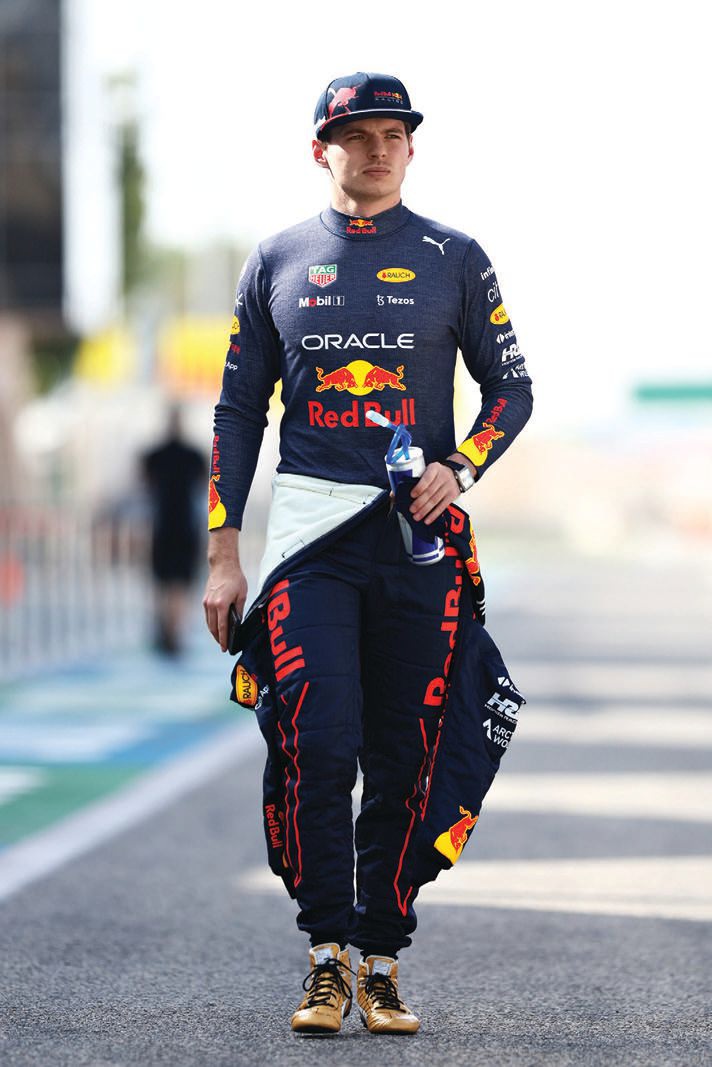 Aside from Red Bull Racing, he also boasts an impressive collection of other partnerships, such as the prestigious honor of partnering with Swiss watchmaker TAG Heuer.

“I grew up in F1 since my dad was also a driver, so Red Bull and TAG Heuer were always around—to me, it was a natural fit. It is great to be teamed up with them. We’ve already launched some exciting collaborations and I look forward to more,” Verstappen notes.

On his wrist, he’s wearing the TAG Heuer Monaco Titan Special Edition. If you see him around—especially on race day— chances are he’ll be sporting this beauty. The iconic square chronograph was designed for the F1 powerhouse driver and, since his win at the Monaco Grand Prix, has become his go-to wrist candy for all important moments.

“TAG Heuer gifted me this watch last year, before the actual race. Since I won, it has sort of turned into my lucky charm,” he notes.

And since he continued on to become the 2021 world champion, it’s safe to say there is likely credence to that belief.

As a driver, having a watch brand partnership is an extraordinary and pivotal honor. 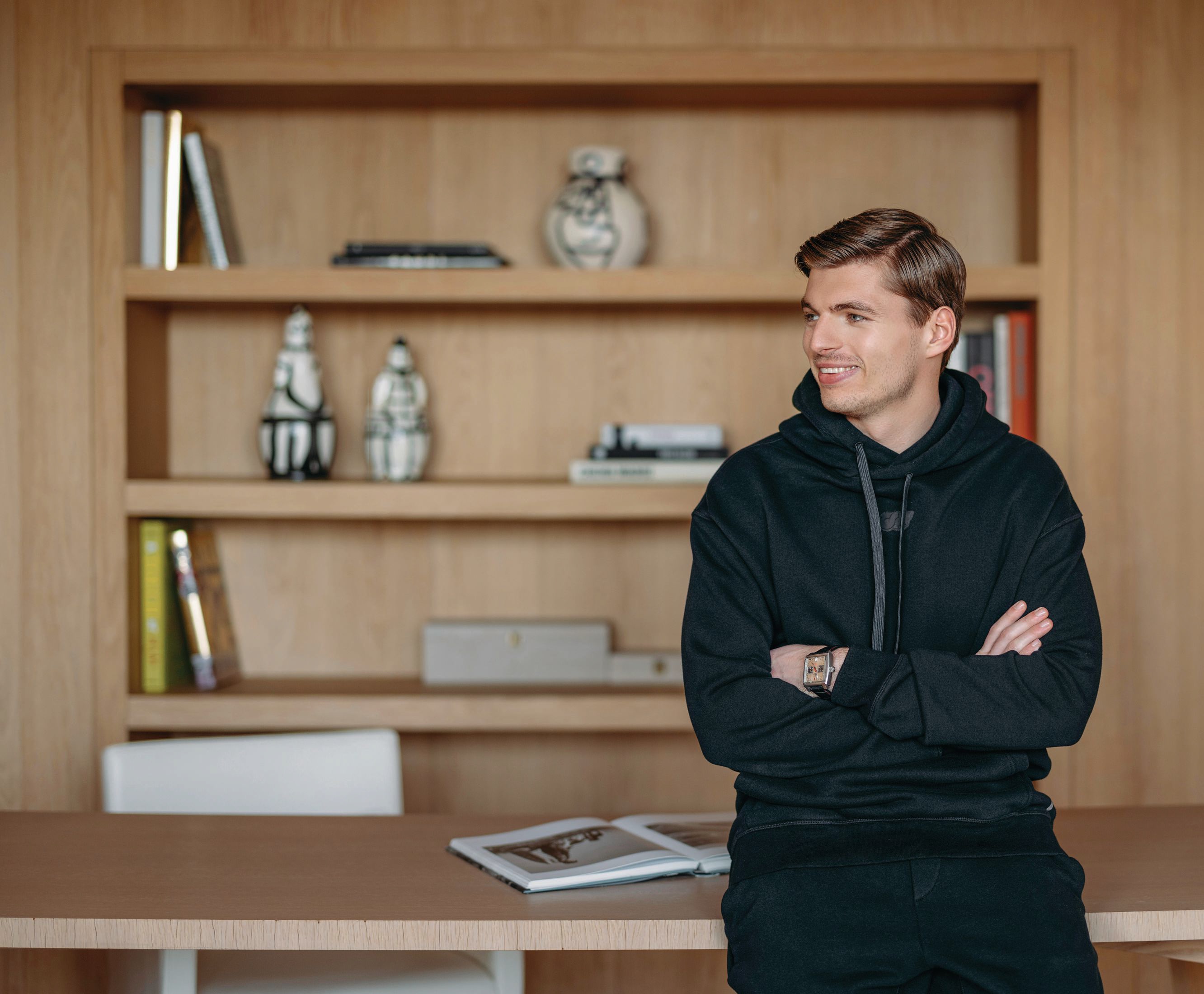 Verstappen’s partnership with TAG Heuer is extraordinarily important because as a professional F1 driver, time is everything. PHOTO BY NAIM CHIDIAC

“Time is super important as a driver. When you’re on the track, you want to be the fastest one, so the least amount of time you spend on a lap is of course ideal. Not only just lap time, but preparing the car, traveling from one race to another—it all revolves around arriving on time,” he notes.

Aside from sporting his lucky wrist token, Verstappen’s prerace ritual is relatively simple and regimented.

“It’s always important for me to get the right amount of food—not too much, because you don’t want to feel full while driving, but enough for energy. I also have meetings with my team on strategy, going through the times and planning. I also of course say hello to the fans, relax in my room for a bit and then get ready. I warm up my muscles a bit but nothing too crazy,” he shares.

From a young age, Verstappen learned this diligent regimen from the person he admired most—his father. Thus, it was only natural that he would pick up on the sport and follow in his father’s footsteps to pursue the career with his full mind and body.

“I grew up traveling all over the world, achieving this life goal together with my father. To me, he is an inspiration—when you do this kind of thing together, it’s a special experience. When you’re little, you listen a lot and take in a lot of advice. When you see that advice working out for you, it makes it all the more important, and you have a lot of respect for that. I try to use that guidance from him throughout my career,” he shares. 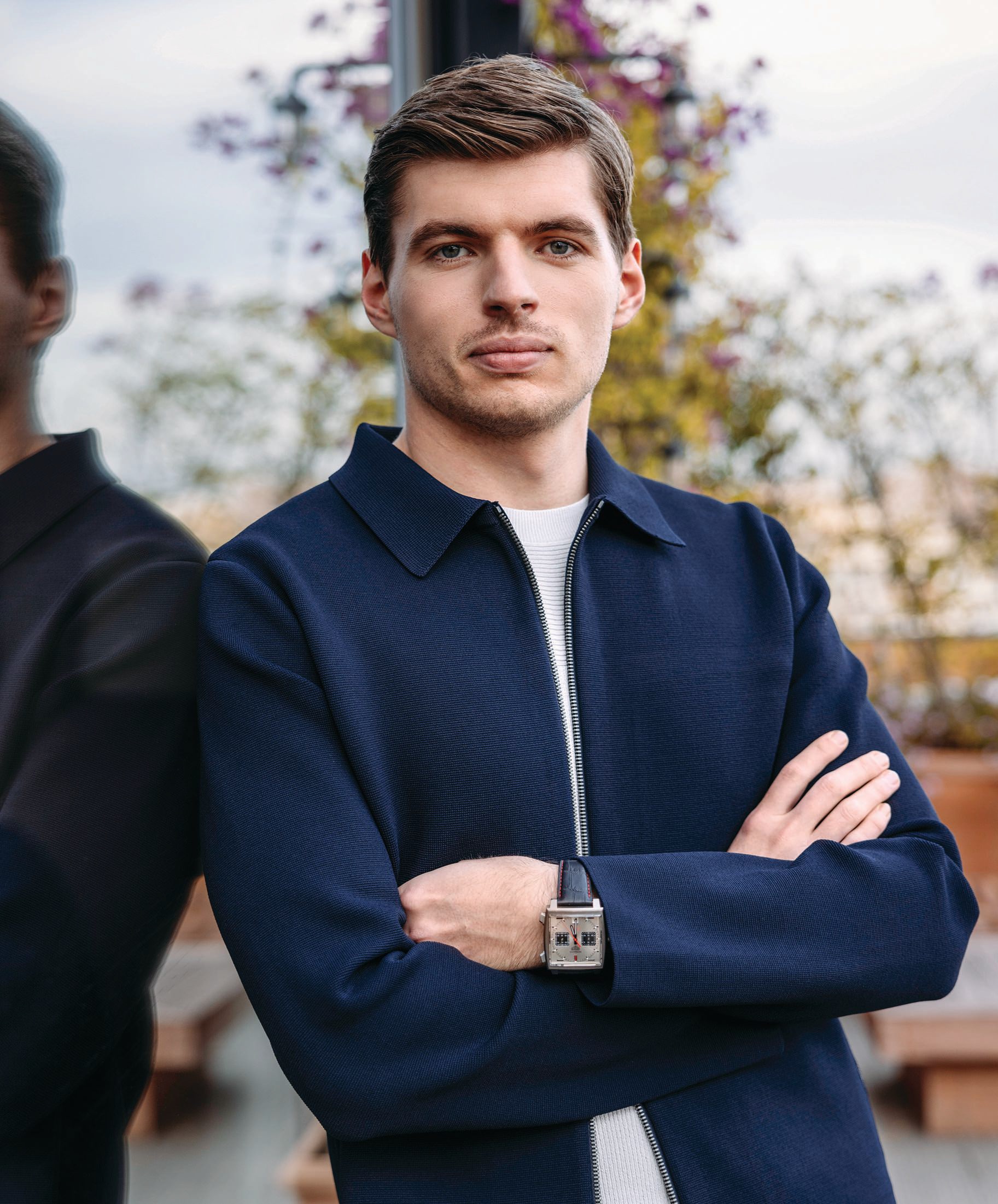 Amazingly, the young driver does not require much motivation aside from the sought-after championship title to remain focused. What really keeps him going is a genuine love of the sport.

“I love what I’m doing, so I never need to tell myself to stay motivated. When you love what you do, and you enjoy who you’re working with, it’s just a natural thing,” he says.

And while only 24 years old, he’s learned his share of lessons from the competitive and demanding nature of his career.

“The best takeaway I’ve come to recognize is to always be yourself. My dad ingrained in me from a young age to be myself, be honest and straightforward and people will appreciate that—so that’s how I always try to be.”

Proving true thus far, it’s safe to say we’re placing our money on Verstappen this Miami Grand Prix. With the world’s best drivers, brand activations, live entertainment and more, May 6 to 8 is poised to rock our city like never before. Welcome to the sunshine state of mind!