One chef's Southern influences and another's Australian upbringing and Asian travels inform the menu at The Sarsaparilla Club. 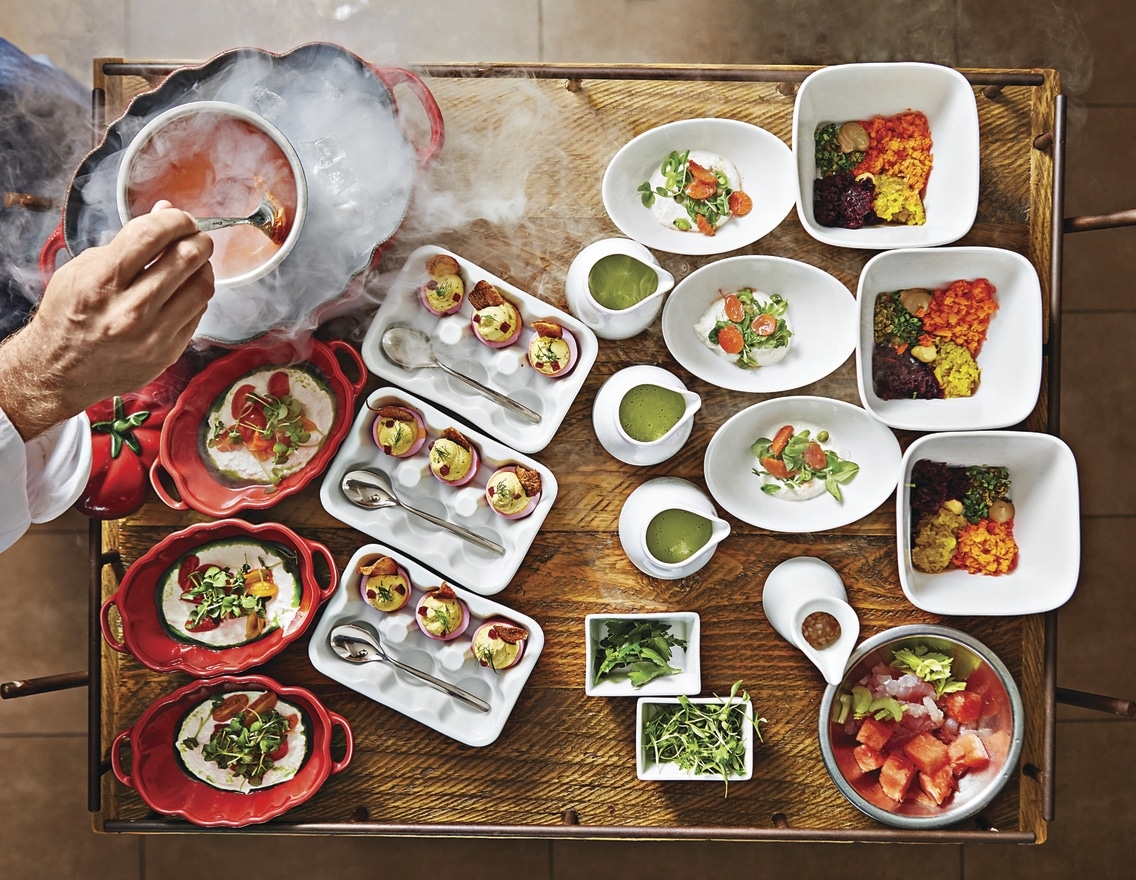 If you’re like most Americans, you have no clue what sarsaparilla tastes like, let alone how to spell it. Now, thanks to the Sarsaparilla Club, you can mend both of those gaps in your epicurean education. A brambly, climbing vine that grows in tropical and temperate parts of the world, the root of which ferments into a usually alcoholic, anti-­inflammatory drink, sarsaparilla was an integral piece of chef Jeff McInnis’ Southern childhood in northwestern Florida. At Sarsaparilla, however, the vaguely medicinal nonalcoholic tonic, along with a signature fried chicken that is actually brined with a green curry before being crisped, is one of the few representations of McInnis’ sensibilities. Instead, the menu bows largely to fellow chef Janine Booth’s Australian upbringing, as well as her frequent Southeast Asia sojourns.

In fact, Sarsaparilla is this powerhouse duo’s answer to their New York City restaurant, Root & Bone, which eschews in favor of McInnis’ culinary background. This seems reasonable, given that both McInnis and Booth have experience working with Asian and global flavors at various Miami restaurants before Manhattan stole them away (for a while).

Now back firmly entrenched in the Miami dining scene, the pair, both Top Chef alums, describe the food at Sarsaparilla as an “American dim sum” experience, which does have some problematic cultural appropriation implications. These aside, the various small plates of dumplings and starters that are wheeled around the dining room on carts in order to offer tableside preparations, along with a written menu of small and large plates for a la carte orderings, offer a world of vibrant, stimulating flavors.

These include the drunken deviled eggs, which are an unusual shade of pink. McInnis says they’re the result of a happy accident after Booth tipped a dish of hard­boiled eggs into a vat of beet juice and discovered a complementary match. The beet-­poached eggs feature an intriguingly sweet vegetal tang and are topped with a pickled beet relish for even more color, and served with root chips for textural contrast. The eggs are plated tableside from carts in white crockery dishes shaped like half­-dozen egg cartons, likely the result of design-­oriented Booth’s eye. (Booth also helped choose the mismatched vintage-­y furnishings for the eatery, which make it seem very homey for a high-­end, trend­-driven establishment on South Beach.) Other items, ranging from a nifty heirloom tomato sorbet partnered with homemade ricotta, garnished with fresh basil and scooped up with olive oil-smeared toast to an irresistible trio of steamed buns stuffed with pork belly bacon, slaw flavored with cilantro plus peanuts and fish sauce, arrive in everything from ruby fluted bowls to bamboo baskets. Lovers of classic Lenox dinnerware will enjoy the Butterfly Meadow plates; servers are generally amused when intrigued diners turn over the variety of dishes to see the makers’ marks on the back of them.

If you do this, make sure not to dump any of the rich, supple dumplings, which include smoky homemade sausage­barbecued plantain with scallions; braised short rib plated over a salsify puree saved from being cloying by a touch of black vinegar and crisp onions; and jewelhued beet­and­goat cheese topped with toasted hazelnuts, crumbles of ricotta and rivulets of brown butter. Some of these not only arrive in some sort of warming cast iron, but they’re also simply too scrumptious to waste.

My other piece of advice is not to go overboard with the starters, although it’s nearly impossible to resist two vegetarian options. The carrot­-beet tartare made of ground root vegetables mixed with a black garlic aioli, then scooped up with some of those roots turned into chips, has a deep umami quality that grips the palate and doesn’t let go. Likewise, the corn four ways is a masterful treatment of corn on the cob that is reminiscent of Mexican street food. Cooked in corn stock and then grilled, four sections of corn are bathed in butter into which cornbread has been ground to thicken it, then sprinkled with lemony popcorn for added crunch.

Corn reappears as an appetizing side dish, this time grated (reinventively titled grits) with a swirl of green onion and arugula mascarpone. If you have a small appetite, enjoy it as an accompaniment to the chile-­lime chicken wings, which are deboned and then stuffed with a chopped mix of shrimp and bacon before being sealed with their own skin, deep-­fried and mixed with sauce. Placed upright around a pool of thick ranch dressing and celery, the wings are an intriguing presentation that allows for proper knife-­and-­fork etiquette.

On the lighter side, a skin-­on fillet of steamed snapper is treated with a garlic-­herb chimichurri, then laid out over spicy miso-­flavored long beans and accented with grilled lemon and peppers. This is perhaps the only main course that doesn’t require a serious lie-down after.

If you do have endless capacity, though, be sure to expend it on entrees, which are redolent with Eastern spices and display a variety of techniques, including pickling and fermentation. The short-­rib meatloaf is a masterpiece of patience, with brisket and short-rib that’s been cooked for days, then deconstructed, repacked into a loosely shaped brick and served over aromatic jasmine rice that’s surrounded by rendang, a red-­brown curry extrapolated from beef dishes in Malaysia and Indonesia, as well as pickled chiles, lemongrass and magrut lime.

The clean tonic of a sarsaparilla float is just the right refreshing end to a meal, but if a sweeter dessert is called for, try Pastry Chef ail oetsch’s banana cream cake, which features vanilla sponge under a lightly browned beehive of sweet meringue. More interesting, but not to everybody’s initial liking, is the sarsaparilla root beer chocolate cake, which is decorated with a handful of rainbow-­hued root chips that are coated in honey butter and sea salt. The idea is to fuse the flavors of rich, sweet, salty and earthy, and while it may not be everyone’s cup of tea, it’s certainly a palatable symbol of what Sarsaparilla represents: a carefully considered blend of Down South and Down Under.