Daniel LeDisko of LA Riots at The Setai

Daniel LeDisko of LA Riots at The Setai 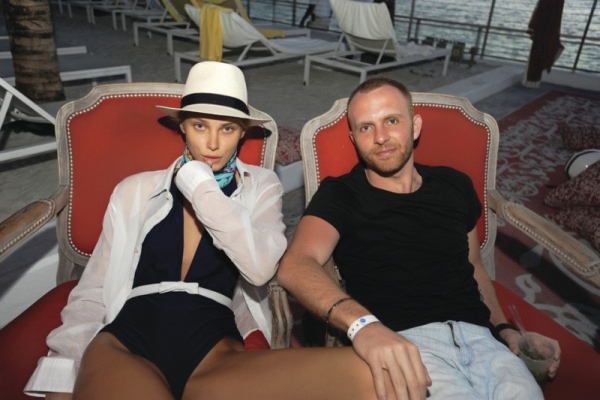 Tamara Zhukova and Filipp Korentsvit at the Mondrian

Tamara Zhukova and Filipp Korentsvit at the Mondrian Baggi Begovic at The Setai

Baggi Begovic at The Setai Cedric Gervais and Danny Chetrit at the Delano

Cedric Gervais and Danny Chetrit at the Delano

Just when we thought the electronica thumps of the Ultra Music Festival were behind us, in come the beats of Miami Music Week and its multitude of parties. DJs were putting records on all over the city, and once again, the EDM masses couldn’t get enough of it. At Ricochet in Midtown, Cîroc Vodka hosted a weekend of concerts, including an intimate four-hour set by Wyclef Jean that proved to fans the singer is once again focused on music and not the Haitian presidency... Hennessy Black also got into the act with the show Art of Night: The DJ Series, a photo exhibit showcasing the work of nightlife paparazzo Seth Browarnik. Here, the guest list was eclectic to say the least, with everyone from director John Singleton to publicist Jonathan Cheban in attendance. We also saw Timbaland and actress Jessica Szohr... Hotels got in on the action too, with parties from the Delano to the Mondrian to The Setai, where the attention was all on the Winter Music Conference and the many DJs in town for the event. Party central for all the action was the hotel’s courtyard, where a gaggle of models-and-bottles types gathered nightly for performances by DJ Roger Sanchez, Ben Westbeech, DJ Boogie and Oliver. Long live the synthesizer! Photography by Bryan Levy and Kirill Was Here