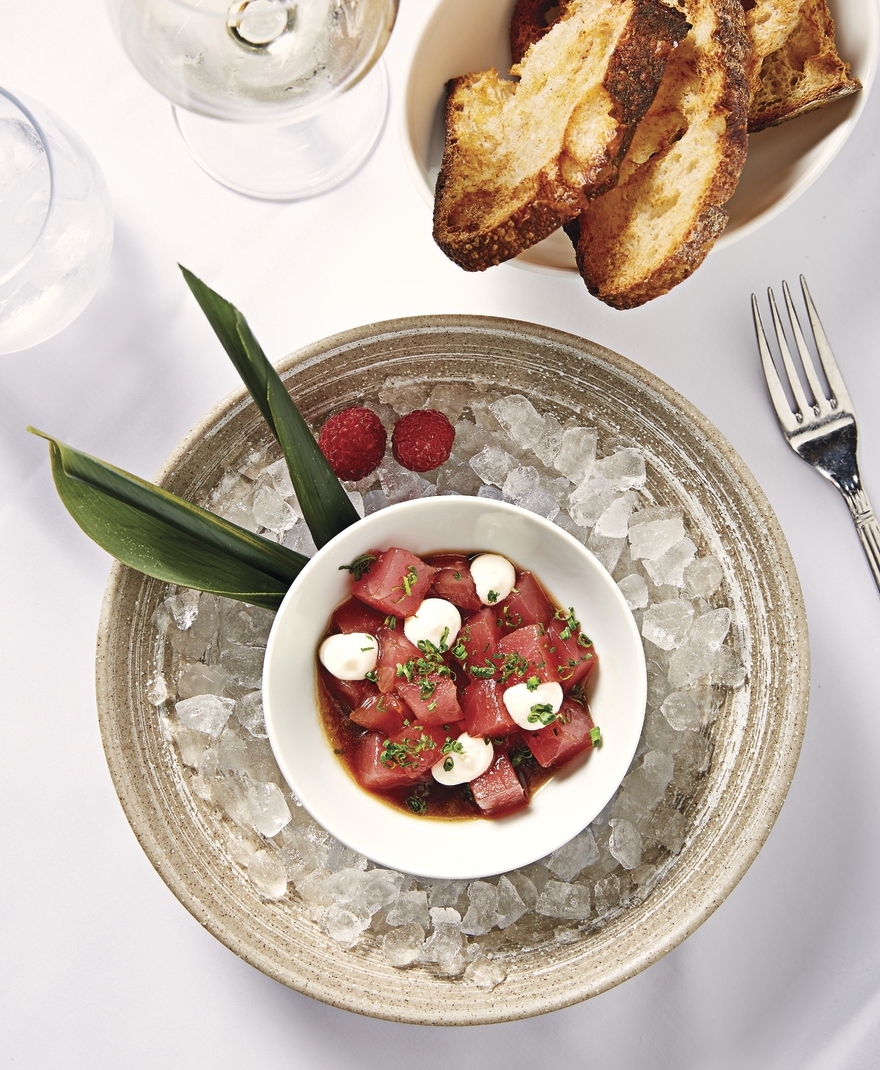 CELEBRITY-OWNED RESTAURANTS seem to generally go one of two ways. At their best, they offer patrons the same thing that top athletic matches, like Wimbledon or the NBA Finals, do: superior product, prime entertainment and the chance to brush up against superstars—or at least watch them in action. At their worst, they’re simply like any other venue you took a chance on and would never visit again.

Tatel Miami, at the The Ritz-Carlton, South Beach, fortunately falls into the first category. Following the successful venture that debuted in Madrid, the Miami sibling is owned by a trio of Spanish luminaries who need no real introduction: tennis player Rafael Nadal, San Antonio Spurs player Pau Gasol and Miami-raised singer Enrique Iglesias, and their hospitality partners Abel Matutes Prats and Manuel Campos Guallar of Mabel Capital. And while I have yet to see any of the three famous men in the establishment, they all do, purportedly, drop in whenever they’re in town.

Still, celebrity sightings shouldn’t be your primary reason to visit Tatel. The fare, executed by chef Nicolas Mazier, formerly of Nobu Miami, and the interior, designed by Studio Gronda, deserve much of the spotlight. In fact, you’ll want to tear your eyes away from your plate and stare at the ceiling and walls from time to time. An enormous, graduated chandelier, sculpted from more than 1,000 bronze tubes, looks like it’s defying the laws of both gravity and engineering as it hangs over a bar in the round. In the dining room, video mapping of what is supposed to be a couple swimming in moonlight, continuously rolls over a succession of “skylights.” Reproductions of early 20th century Spanish impressionist seascapes dominate one wall; a shadow clip of a flamenco dancer plays on a screen on another; and a copper DJ booth at the front of a stage commands as much attention for its gleam as it does for the music that emanates from it.

The mixed-era design is oddly mesmerizing, but not as much as the food preparations performed tableside here. On the way to becoming a lost art, sacrificed to time and training—not to mention the space required for service trays and carts where you might possibly be able to fit another table—tableside prep is a nicety in general that has become limited to cracking branzino out of their roasted, sea salt caskets for filleting and plating. At Tatel, however, the servers finish the crisp veal Milanese by breaking a raw egg and frosting the white and yolk over the hot, golden plank. As the thin layer of egg heats up, it cooks ever so lightly; meanwhile, the server sprinkles chopped black truffles on it and sets it before you. It’s a study in tasteful, textural simplicity.

They also dish out the highly aromatic rice and pasta dishes, which mostly serve two people and range from Alicantino-style rice with shrimp to black ink fideuà with calamari, right by your elbow. One of the signature specialties, blind rice with Maine lobster, isn’t so much de-shelled as it is simply divided from a double-handled pan. But enough of the approximately 1-pound crustacean has been opened in the kitchen for easy removal, and the flavor is finely pungent, with the rice firm but cooked through.

Don’t ask why the rice is able-ist, though; the servers can’t explain why it’s “blind.” (In cooking terms, blind rice is baked or toasted before being cooked with liquid.) Nor do they know why the tender wagyu hamburger, which is an addictive exercise in gastronomy, covered as it is with tetilla cheese, is served “pepito style.” (Pepito is slang for meat sandwich—it really just means the burger is on a roll.)