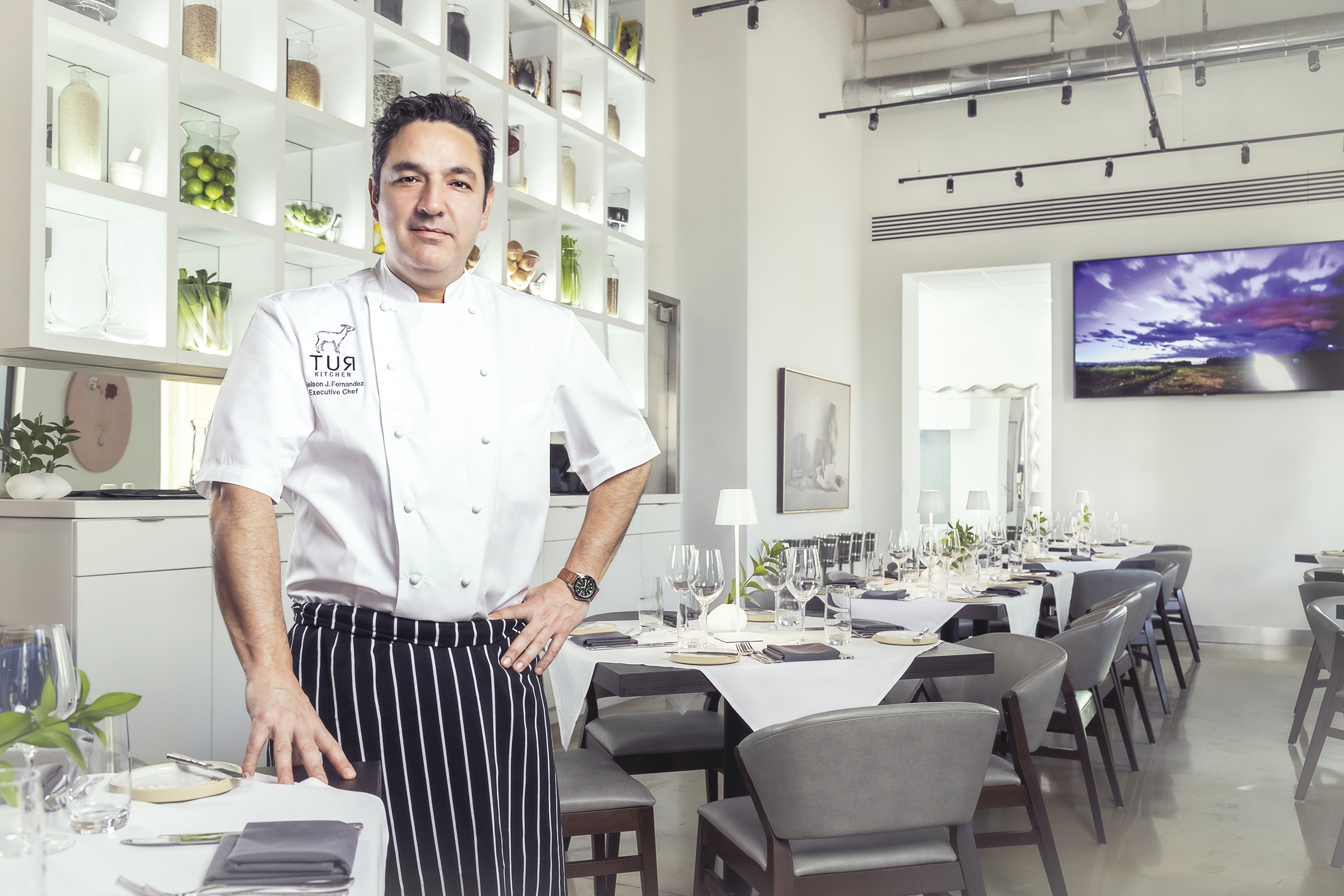 “Everybody thinks that we are Turkish, but we are not,” says TuR Kitchen executive chef and co-owner Nelson J. Fernandez (a Colombia native). “We are a Mediterranean restaurant that uses dishes and ingredients from countries that border the Mediterranean Sea.” Turkish or not, Fernandez and his crew are doing something right, as his eatery has emerged as one of note in not-so-easy-to-please Coral Gables. Here, the chef tells us what diners can expect.

How did the concept for TuR Kitchen come about? It was an idea we had as a family; my wife, my mother-in-law, father-in-law and me. We wanted something simple and Mediterranean, but then we kept modifying the concept, and now it’s a modern, casual restaurant with flavors from all over the Mediterranean. How did you get the idea for the name? I wanted to call it TüR, which means spice in Turkish, but the diaeresis over the ‘u’ was causing trouble when it came to internet search issues, so we settled on just TuR, which is a wild goat from the Caucasus mountains. It symbolizes fertility, vitality and ceaseless energy. What was your approach to the menu? Everyday accessible ingredients with fine technique and a focus on presentation. Do you have a favorite dish? The braised lamb leg. The combination of flavors and the option of having it with bread and/or lettuce wraps really pleases me. What’s one dish diners might overlook and really shouldn’t? Our pork tenderloin, which was created for the TV show MasterChef Latino on Telemundo in which I had a guest appearance. It’s a Mediterranean-style dish that incorporates ingredients from seven different Latin countries. The end result is a combination of unique flavors with a Mediterranean twist. You say your restaurant is casual, but the approach to cooking is rather involved, isn’t it? Yes, you’re right. While I refer to the menu as casual, the dishes are actually quite intricate. Our vegetables are all sous-vide, cooked to a specific temperature; our cauliflower is cooked using three different methods, for instance, and that doesn’t include the sauce or garnish. I require my cooks to manipulate ingredients in order to maximize the look of the dish without compromising the integrity of the ingredient itself. What can we expect from the restaurant this spring? By March, we’ll be running on all gears. We should have a lunch menu Monday through Friday, a weekday happy hour with small bites and a Saturday brunch. 259 Giralda Ave., Coral Gables, 786.483.8014 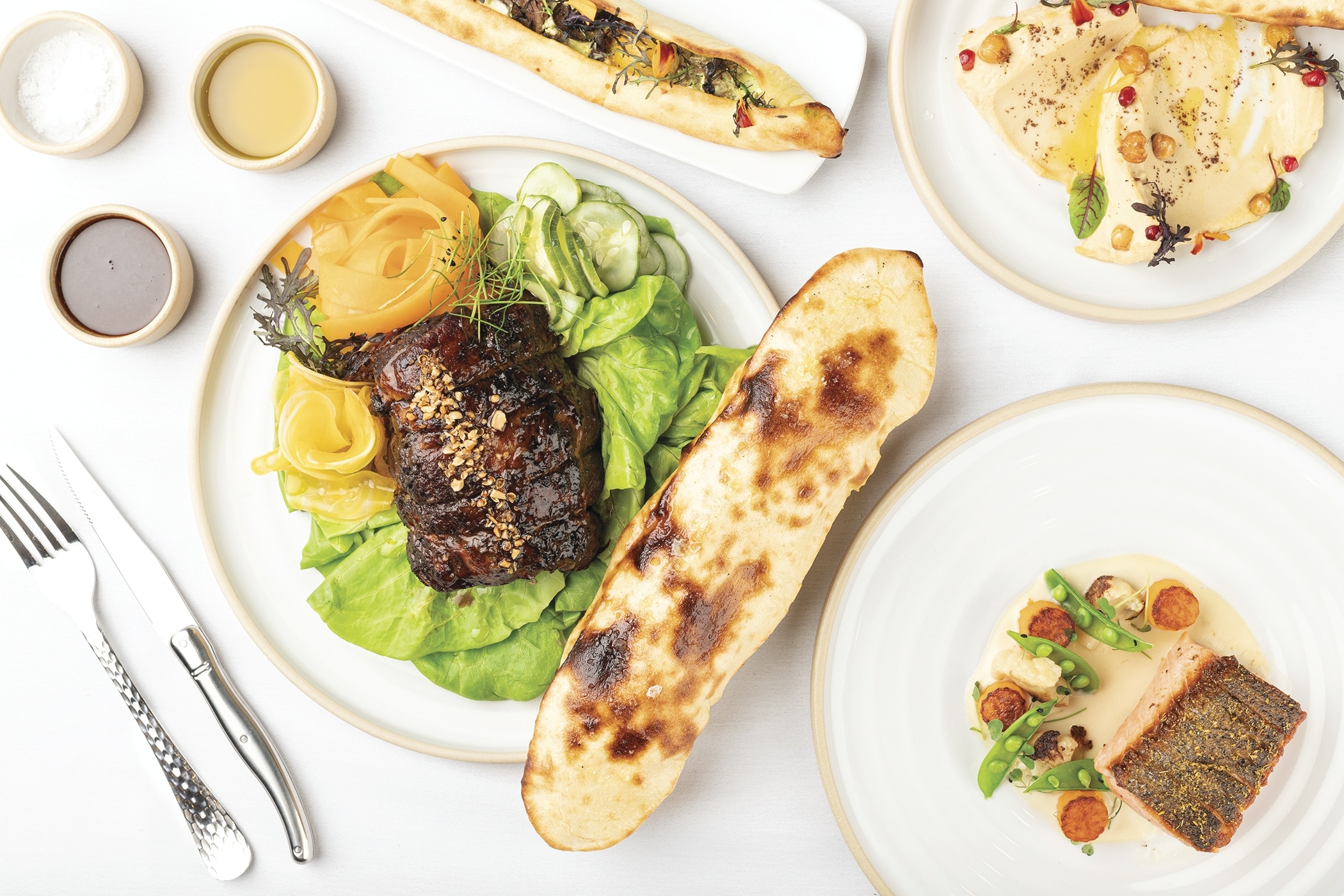 A selection of Mediterranean dishes from TuR Kitchen 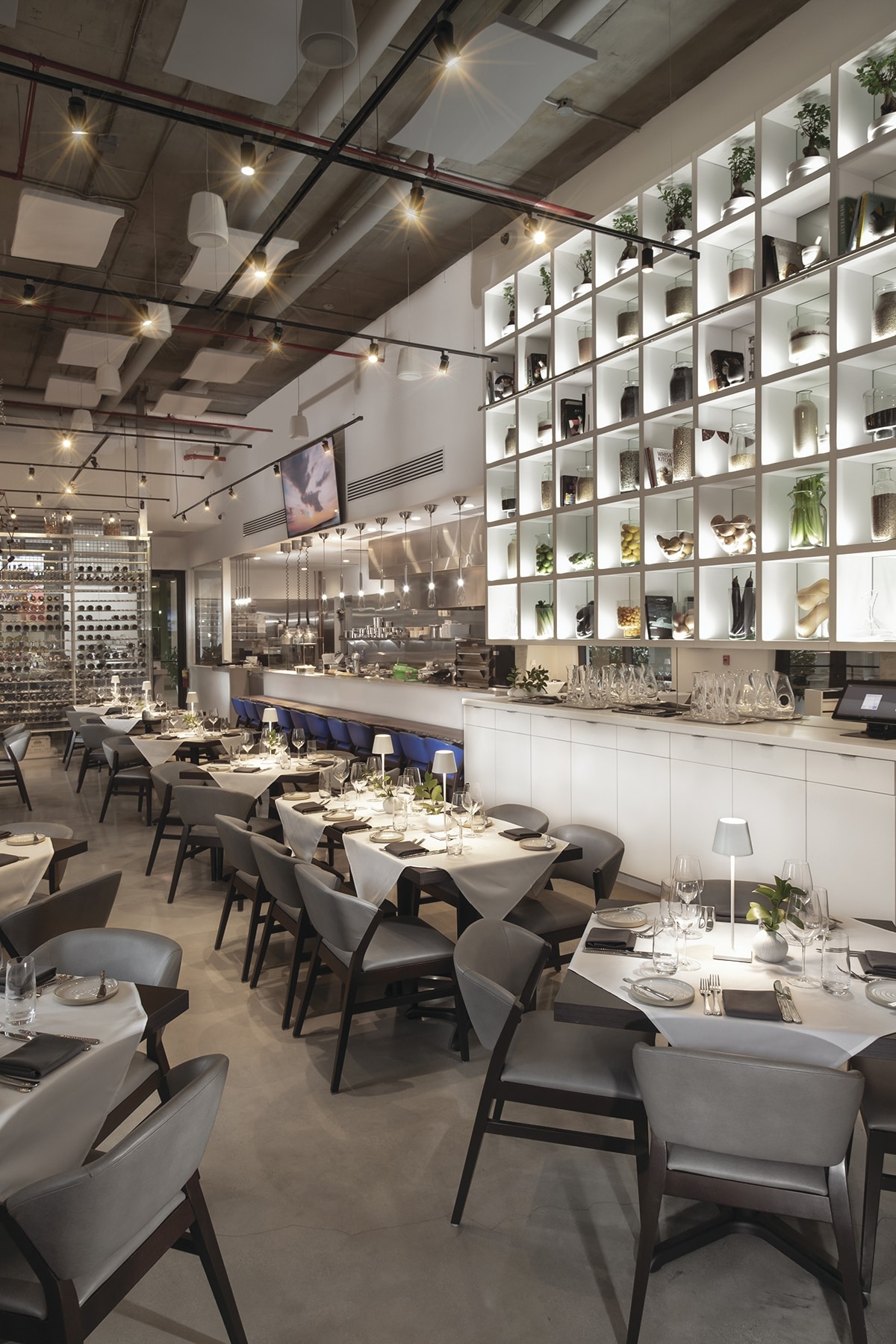 Rooftop lounges are de rigueur in Miami, especially before the weather turns on us. The latest to join the fray is The Nest, a new perch from former nightclub owner Alan Roth and Terranova founder Stephen Bittel. Accessed through a secret elevator at The Lincoln Eatery food hall, the 3,320-square-foot space is marked by antique planters, fun pillows, oversized bird cages and teak lounge furniture. Open from 5PM on Friday and Saturday nights, the venue features cocktails such as the Bird in Hand, a mix of tequila, Chinola passion fruit liqueur, grapefruit soda and fresh lime, and the Nest Gin & Tonic, made with Bombay Sapphire, yuzu tonic and smoked cinnamon bitters. As of press time, the owners were planning on introducing a series of different culinary activations, such as an oyster shucking station from Necessary Purveyors. “The Nest was created for Miami, offering a place that makes locals feel like they are cocktailing in their own backyard,” says Roth. “On any given night, there’s an element of surprise, whether it’s live music or a server on roller skates handing out shots.” 723 N. Lincoln Lane, Miami Beach 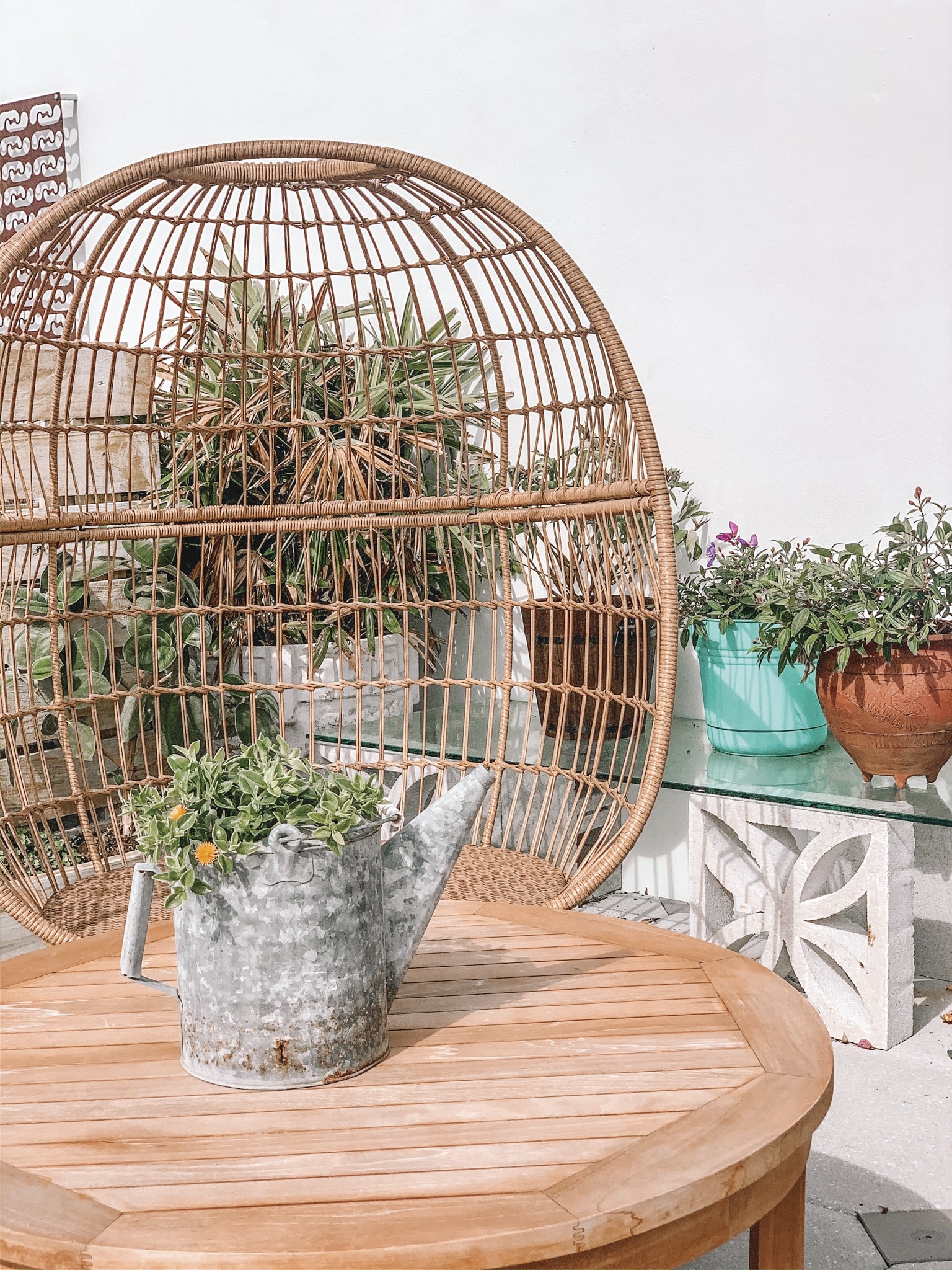 A nook at The Nest 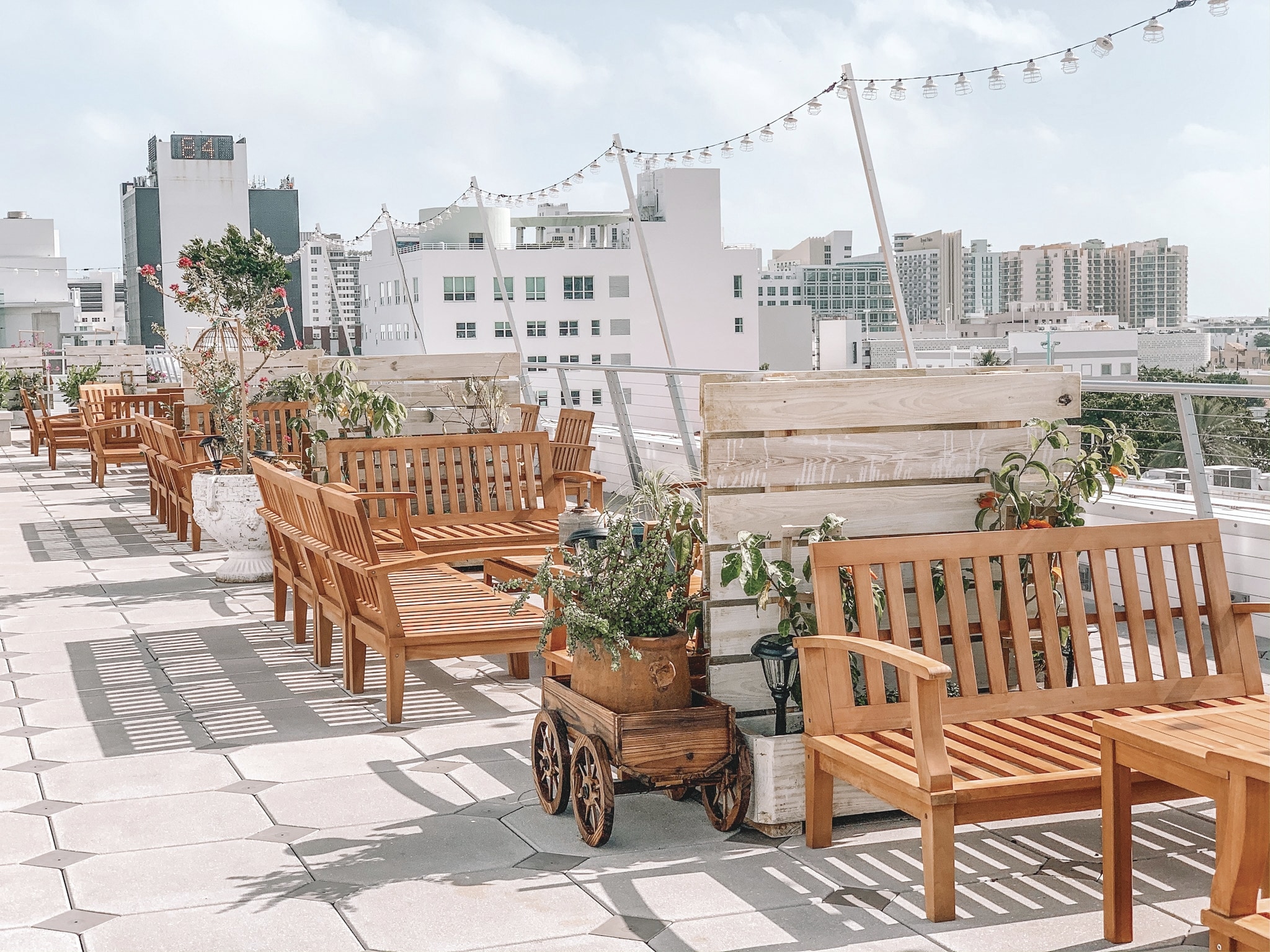 Select foodies got a taste of James Beard Award winner Tyson Cole’s sushi savvy at Dim Sum & Disco and Best of the Best at last month’s South Beach Wine & Food Festival. Those who didn’t will just have to wait a few months when the chef opens the eighth location of his Uchi franchise in Wynwood this summer. Uchi Miami’s menu will include hot and cold bites, makimono, yakimono, tempura and on-point sushi and sashimi, as well as what Cole calls “perfect bite” dishes such as hama chile (yellowtail with ponzu, Thai chile and orange). The Miami locale will be the second restaurant the chef has opened outside of Texas. 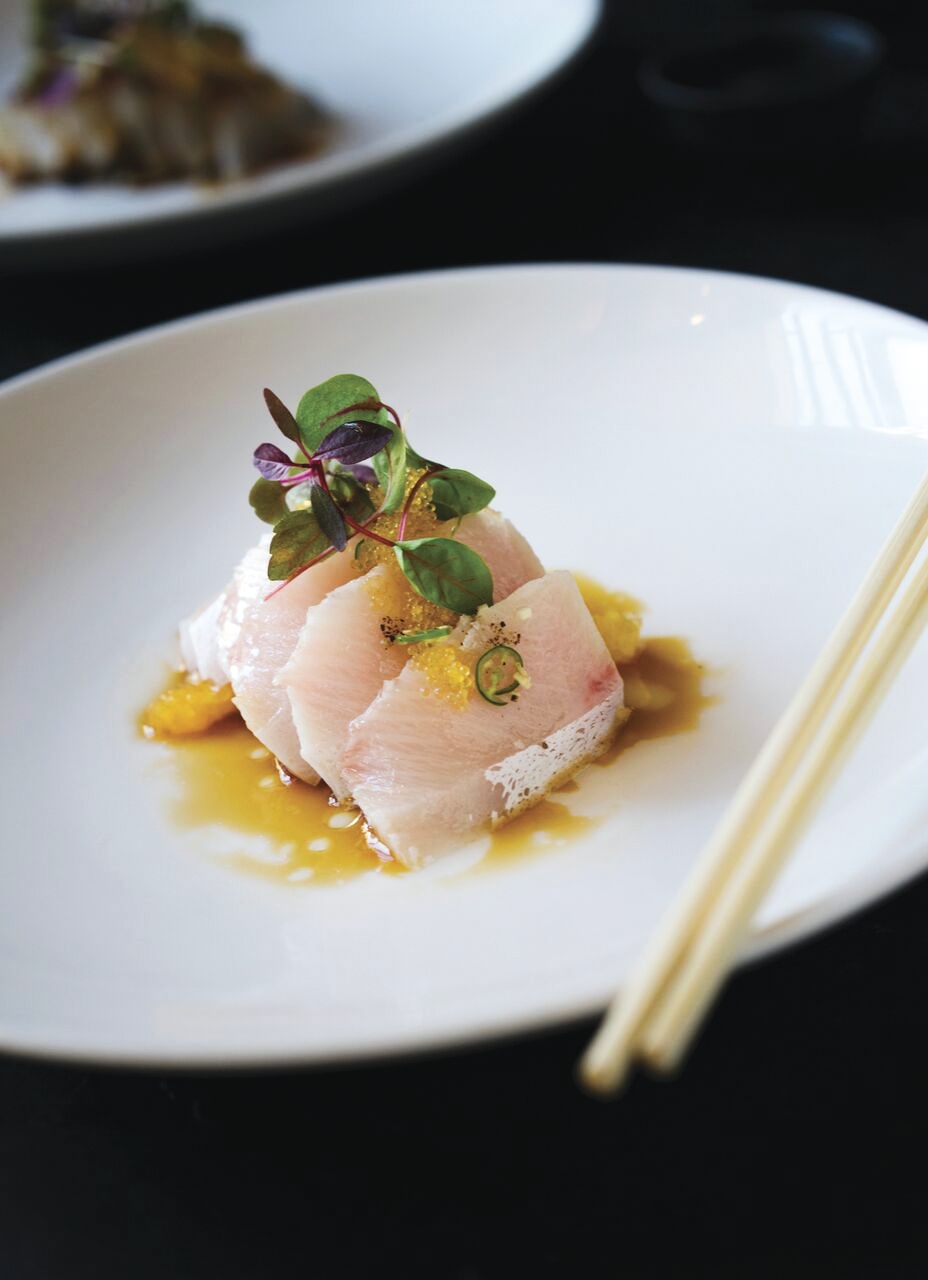